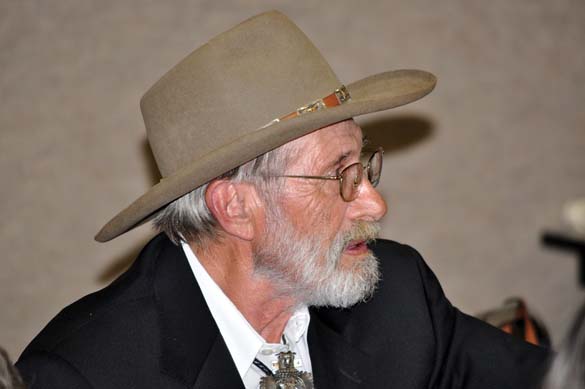 At this year’s awards banquet of the American Federation of Mineralogical Societies (AFMS), July 31 in Albany, Ore., the Federation awarded Dr. Robert (Dr. Bob) Carlson of Los Alamos the Societies’ most prestigious award, the 2017 AFMS Recognition Award, given on rare occasions for exemplary service and achievement.

This year’s AFMS Recognition Award goes to an individual who has been president of both the Northwest and Rocky Mountain Federations in addition to being president of the American Federation. He has done an admirable job in those positions and has held numerous committee positions in each of those Federations. Bob has always had a great interest in competitive exhibits and worked hard with the Uniform Rules Committee at both the Regional and AFMS levels.

Bob belonged to the Lakeside Gem & Mineral Club in Kennewick, Wash. and was the NFMS president when the AFMS Show was held in Portland, Ore. He loves faceting, attended all of the faceting conferences that were held in the Pacific Northwest, and became an AFMS Master Faceter.

However, perhaps the thing he most enjoyed about that area – and still does – is touring the wine producing areas and sampling the products.

“I was surprised and very honored as this prestigious award is not given very often,” Dr. Carlson said.

He is now a member of the Chaparral Rockhounds and the Los Alamos Geological Society in New Mexico and was serving as AFMS president when the AFMS Show was held in Roswell. He is currently the New Mexico state director and has served on many committees in the Rocky Mountain Federation including Uniform Rules and Long Range Planning.

A trip to any Regional or AFMS Convention he attends would not be complete without a visit to his hotel room hospitality suite for drinks and snacks. This has become a tradition, which promotes fun and fellowship, created friendships and has brought us closer together in our rockhounding hobby.

Dr. Carlson is always willing to share his expertise, knowledge, and advice with anyone who asks. I am pleased to be able to present Dr. Robert L. Carlson with the 2017 AFMS Recognition Award for his outstanding service to the American Federation of Mineralogical Societies.

Dr. Carlson has lived in Los Alamos since 1989 and worked at os Alamos National Laboratory until 2000.

History of the AFMS:

With the formation of organized groups such as the New York Mineralogical Club in 1886 and Philadelphia Mineralogical Society in 1892, interest in the earth sciences and lapidary arts took on a new meaning and importance.  Members of these pioneering organizations went on field trips, collected avidly, wrote extensively on their finds and interests and shared with one another a love of beauty and knowledge.

As interest in the earth sciences and lapidary arts continued to grow and as more and more individuals learned about cutting precious and semi-precious stones or collecting minerals and fossils, it became obvious that a national overseeing group would benefit all.  Such interest was expressed as early as 1938 when Dr. H. C. Dake of Portland Oregon suggested a meeting between the Northwest Federation and California Federation.

The activities of World War II necessitated putting any further organizational efforts on hold and thus it was not until 1946 that activities were resumed again.   Correspondence between Dr. Ben Hur Wilson of Joliet, Illinois and Dr. Richard Pearl of Denver, Colorado focused on the idea of a National Federation as proposed by Dr. H. C. Dake in 1941.  Dr. Dake of Portland, Oregon was Editor of the “Mineralogist Magazine”.  At the Northwest Federation Convention in Boise Idaho (1946) a suggestion was made to hold a combined convention.

Dr. Pearl eventually invited delegates from the four existing Federations to meet with him during the Rocky Mountain Federation Convention in Salt Lake City, Utah. The meeting was set for June 13, 1947 and was held at the Newhouse Hotel.

Since it was the desire of those present a new organization, named the American Federation of Mineralogical Societies was formed.  Officers were elected and committees formed to write a Constitution and By-Laws. Denver, Colo., was selected as the site for the first “national” convention, which was held in June, 1948.

The Denver show proved to be a success. Excellent displays and an interesting array of lectures helped insure the future of the fledgling Federation.

California was chosen as the site for the 1949 convention, which was held in conjunction with the “Forty-Niner Centennial” held in Sacramento. With the success of this meeting, adoption of a Constitution and By-laws and a continued growing interest in the earth sciences and lapidary arts, the American Federation was on its way.

The Eastern Federation joined AFMS in 1950 (just after it was formed) and the South Central (formerly Texas Regional Federation and a part of the Rocky Mountain Federation) joined in 1954. The last group to be admitted to AFMS was the Southeast Federation in 1993.

In the 50 years following the organization of AFMS, many important programs have been initiated.

Nearly 1,500 delegates and members were officially registered at the Denver Conclave held in June. It is estimated that at least an additional 1,500 passed into the exhibit halls and meeting rooms without registering, which was optional, making a total attendance of some 3,000 in all.