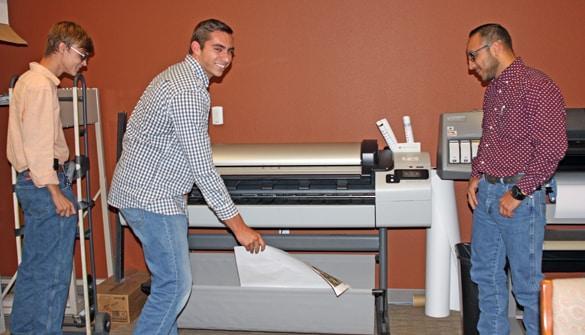 College students Tyler Mobraten, Lucas Montoya and Preston Torres are taking their education out of the classroom and into the workplace.

All three are serving summer internships with the Los Alamos County Department of Public Utilities. Their internships began June 4 and run through Aug.1.

Torres, a student at the University of New Mexico, said he is working in the department’s electrical distribution division. He explained he is looking at how electricity is being transported throughout the County and delivered to people.

Mobraten is enrolled at New Mexico Institute of Mining and Technology in Socorro. He is working with Deputy Utility Manager Steve Cummins on a research project about what it will take to add more electric vehicle charger stations.

“This was a decision made by our utilities manager at the time (John Arrowsmith),” Williams-Hill said. “It helps us to get additional assistance during the summer when we are doing a lot of capital projects.”

The program also helps encourage college students to pursue a career in utilities, she said.

“It is fun. They always come in with a fresh perspective,” Williams-Hill said, adding that the college kids are definitely tech savvy.

All three interns said they are enjoying the experience.

Torres said he appreciates the hands-on experience and the opportunity to put what he has learned in the classroom into practice.

“It’s just a really good experience,” he said. “I feel like I’ve seen more in the engineering aspect in a few weeks then what I’ve seen in school altogether.”

Mobraten said he has seen things he has never seen before, such as the department’s plotter printer. He also has been able to get out into the field and view the power generation plants.

How the three students found out about the internship varies. Torres said he found it online, Mobraten said a friend had participated in the internship and Montoya said his mother works for a utilities department and she made him apply. If it wasn’t this, Montoya said, “I’d be fishing right now.”

The interns said they have enjoyed experiencing the Los Alamos community.

Mobraten said, “Your library is really nice.” He added he has been to the Sportsmen Club’s shooting range.

Montoya said, “The County has a good group of people working here. They’re all nice and helpful. It seems like a great place to work.”