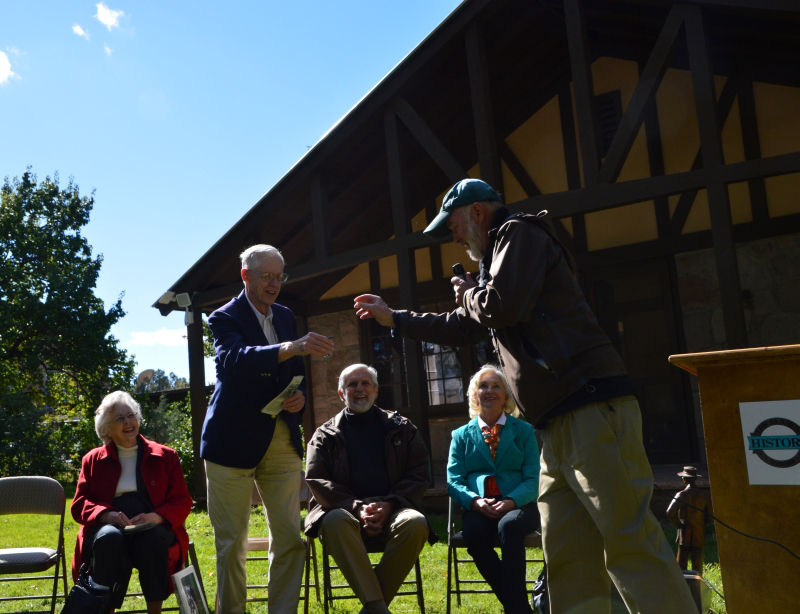 Clay Perkins, left, accepts the oldest existing key to the Bethe House from John Ruminer. ‘They may have Hans Bethe’s fingerprints on them,’ Rumier said. Photo by Carol A. Clark/ladailypost.com 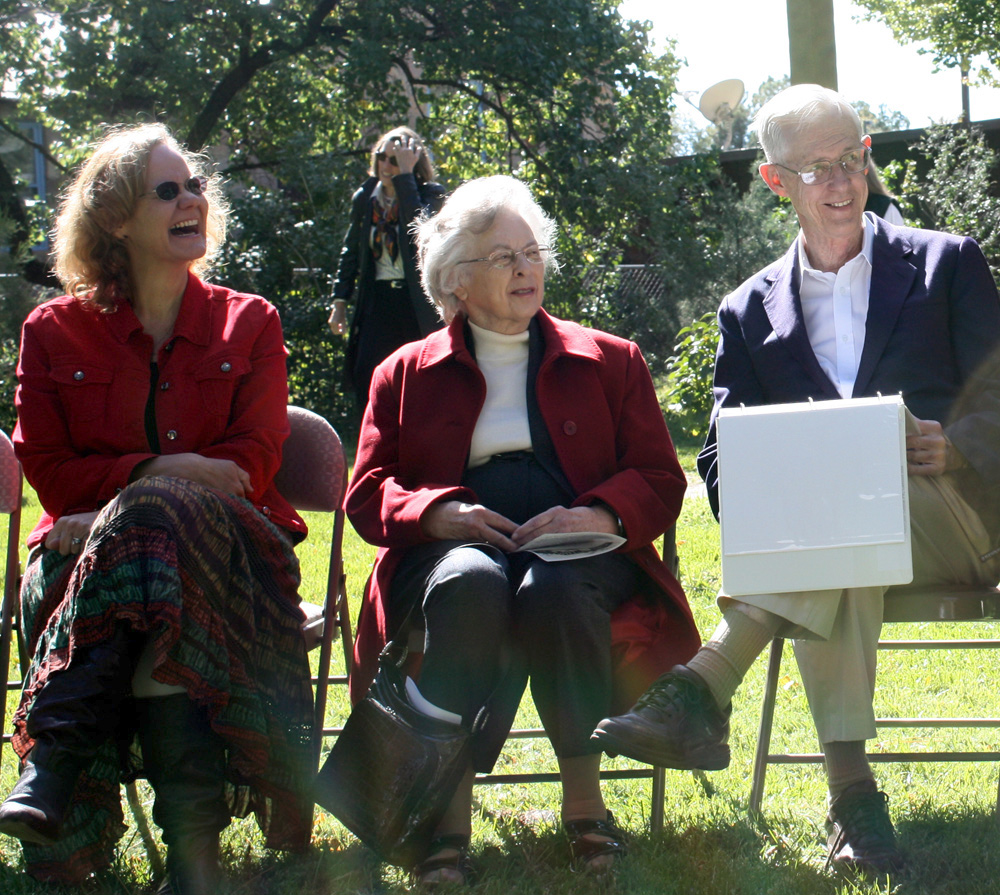 Physicist and history buff Clay Perkins’ fascination with things nuclear began at an early age. “I was only 11 years old in 1945 so I couldn’t get in ─ but the Manhattan Project got into me,” he said. “It hooked me and I never considered any other field. Perkins went on to study space physics at the University of Texas. “I’ve come back, if not to nuclear physics to nuclear history,” Perkins said.

The house was home to two Nobel laureates: Edwin McMillan in chemistry and Hans Bethe in physics.

The building will house the Harold Agnew Cold War Museum. Clay and Dorothy were close friends of Agnew, a Manhattan project physicist and director of Los Alamos National Laboratory from 1970 to 1979. They will also contribute financial support to setting up the museum’s exhibits.

When Perkins first told Agnew of the plans for the museum, Agnew simply said, “okay.” He really became enthusiastic when Perkins showed him a picture of the house. “I stayed there a lot!” Agnew said. Agnew often stayed at the house on visits to Los Alamos when it was owned by his friend physicist Max Roy who lived there from 1946 to 1992.

Calling Agnew “one of the giants of the Manhattan Project,” Perkins said it was “a great pleasure to us” to purchase the house to honor him.

“This house has him in it,” Perkins said. “It’s all the more reason for it to be the Harold Agnew Cold War Museum.”

John Ruminer, historical properties chairman for the Historical Society gave an overview of the property’s colorful history. After homesteader Harold Brook sold the property to Ashley Pond for the Los Alamos Ranch School, a wooden house sat on the site. Some young bachelor teachers were living there in 1931 when a fire burned it to the ground. Later it was discovered that a 30-gallon keg of whiskey stored in one of the bedrooms may have fueled the blaze.

The Ranch School rebuilt the house, this time in stone and the school’s business manager lived there until the property was taken over by the Manhattan Project in 1942. Chemist Edwin McMillan lived in the house during the War Years.

After McMillan left in 1945, Hans Bethe and his wife Rose lived there for less than a year. The Historical Society decided on the Bethe House as a name in spite of the short tenure to recognize the importance of Bethe as the head of the Theoretical Division of the Manhattan Project, Ruminer said.

The new Cold War Museum will “tell the stories of the people that lived here and made the community what it is,” Ruminer said.

The most recent owner of the house was Richard Morse. His son John Chalfant was taking care of the property after Morse developed medical problems. He worked to restore the home, but his labor was undone when the boiler burst and flooded the vacant house. Unable to deal with another restoration, Chalfant approached the Historical Society. He gave them six months to acquire financing.

Since paying his first visit to Bandelier in 1947 to attend a boy’s camp, Perkins has felt an attachment to this area. Many visits to Los Alamos have cemented that attachment. With his interest in the history of the bomb and the Cold War and his friendship with Agnew, Perkins was a great match as a donor.

After his career in physics Perkins “drifted into business and real estate development … consequently, I now have enough money that I can do this,” he said.

“This shows that developing the history of Los Alamos is not something you have to do alone,” Perkins said.

Perkins has an extensive collection of Manhattan Project memorabilia, including a model of the atomic bomb dropped on Hiroshima, Little Boy, in his back yard and a nuclear weapons casing in his office. “I live in a museum,” Perkins said.

He was involved in some controversy over two items in his collection when he purchased the green and red “plugs” that had deactivated, then armed Little Boy, from Lt. Morris Jeppson who helped to arm the weapon aboard the Enola Gay. Jeppson kept the plugs as mementos. The green safety plug was removed and the red arming plug placed in the weapon. Extra red plugs were kept in case one was dropped in the bay during the arming of the weapon, Perkins explained.

Federal prosecutors attempted to block the sale for “security reasons,” which Perkins said was ridiculous. Perkins and Jeppson prevailed and the plugs are now part of his collection.

“Nuclear history is such a misunderstood area,” Perkins said. He and Dorothy hope that the Harold Agnew Cold War Museum will help to change that, he said.

Editor’s note: A gallery of photos from Wednesday’s event will follow in the Los Alamos Daily Post. 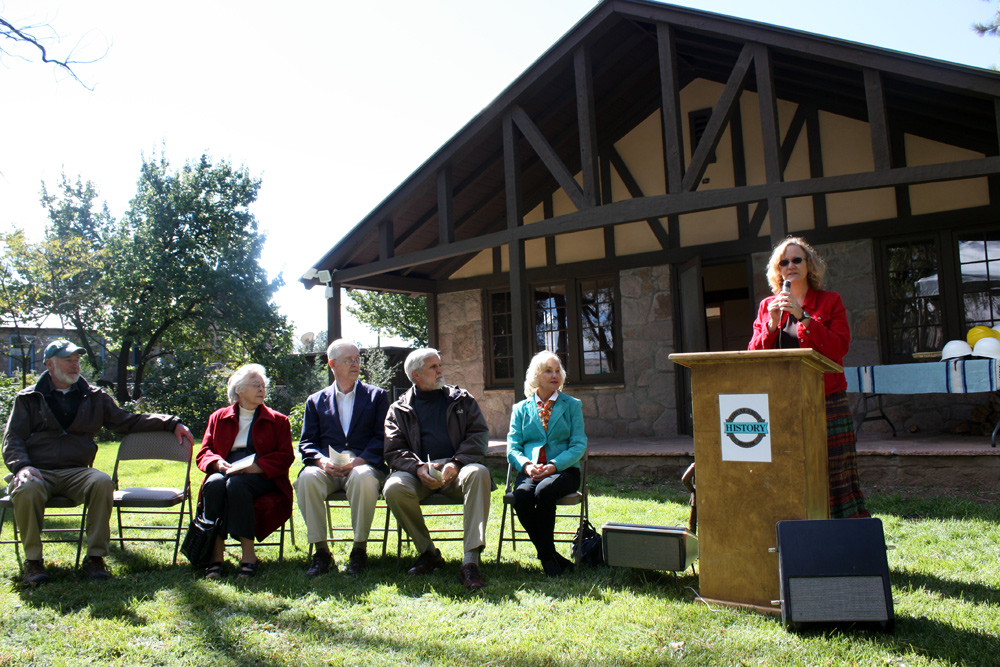