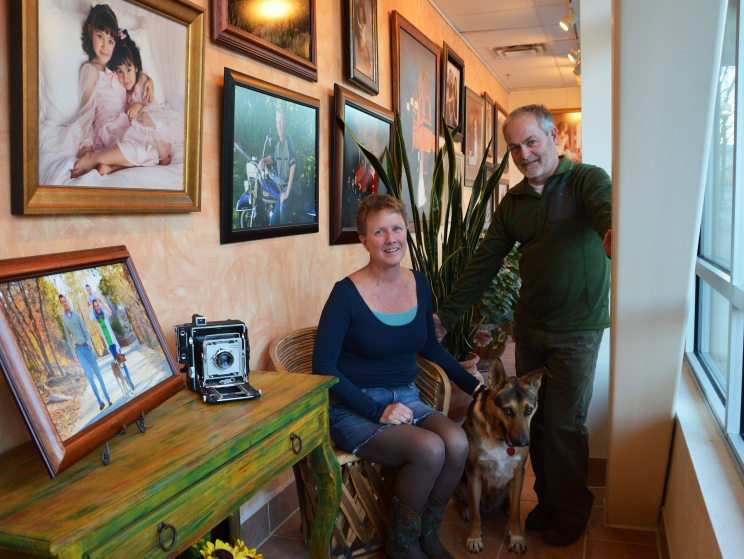 Heidi and Don Taylor with Chip the family dog Friday afternoon at the couple’s downtown Los Alamos studio. Photo by Carol A. Clark/ladailypost.com

Don Taylor’s Photography celebrates 30 years in business this month in Los Alamos and the owners have absolutely no plans to retire.

“You reach a point where you perfect all of your skills and I want to keep it going,” Don Taylor said. “We’re still young and we love what we do. I really feel that I have the best job in the world and Heidi is as much of the backbone of the business as I am, we have a great sense of pride in the finished product we provide people … Heidi is a phenomenal retoucher … we make a great team.”

Taylor, 54, and his wife Heidi, 52, expressed their gratitude to the community for making the last three decades such a joy for them and their children.

“It has been a privilege to be able to provide the service we do in a town like this,” Heidi said during an interview Friday with the Los Alamos Daily Post.

The Taylors are the third owners of the business, which dates back to 1947 and founder Victor Stevenson. The second owner was Don Elliott who was a Los Alamos National Laboratory photographer. Elliott later advertised the business for sale in a trade publication, which Don read while living in New England. He decided to buy the business and move to Los Alamos but then he met Heidi.

“Had she not wanted to come with me, I wouldn’t have done it,” Don said. “I bought the business in 1984 and we had a long distance relationship for a year before we married.”

The Taylors went on to have two children, Luke and Hannah. As they reached middle school, both children wanted to work with their parents in the business.

“We told them they could get jobs anywhere they wanted in town but they chose to work with us,” Don said. Heidi added that both kids learned invaluable customer service skills while working at Don Taylor’s Photography.

“It’s so important to us that we provide the highest quality service and products for our clients,” she said. “Our kids learned that practice while working here and it has served them well.”

Luke, 25, graduated from Northern Arizona University with a business degree and now lives in Flagstaff and works for Federal Express and loves it, Don said, adding that Luke is getting married in June. Hannah, 22, graduated from NAU in December and two days later went to work as a ski concierge at a resort in Park City, Utah.

“Employment recruiters went to her college campus and made her an offer she couldn’t refuse … she loves her job and she is having a ball,” Don said.

The Taylor’s beloved dog Chip was by their side during Friday’s interview at their downtown Los Alamos studio. They rescued Chip from the Animal Shelter the day after the Las Conches Fire evacuation was lifted in 2011.

“Chip is a Shepard mix with an old soul,” Heidi said. “He comes to work with us every day and he even has people who come in just to visit him and bring him treats.”

Don donates his time and talent photographing dogs and cats for the Friends of the Shelter to help them get adopted.

“We appreciate this community so much and really want to give something back,” Don said.

The Taylors have a great appreciation for the history they share with many local families. When Don arrived in Los Alamos 30 years ago he photographed babies, their senior pictures, their weddings and now their children. This June will be his 30th year photographing the graduating class at Los Alamos High School.

Since moving to Los Alamos from New England in 1984, Don has won several awards for his photography at the state, regional and national levels. He said it has always been important to stay current with technology. He bought a one-hour photo mini lab in 1985 that was state of the art at the time. The studio went completely digital in 2005 and is now on its fourth generation mini lab, which allows him to provide prints for his clients.