Domino’s Is Open For Business In Los Alamos 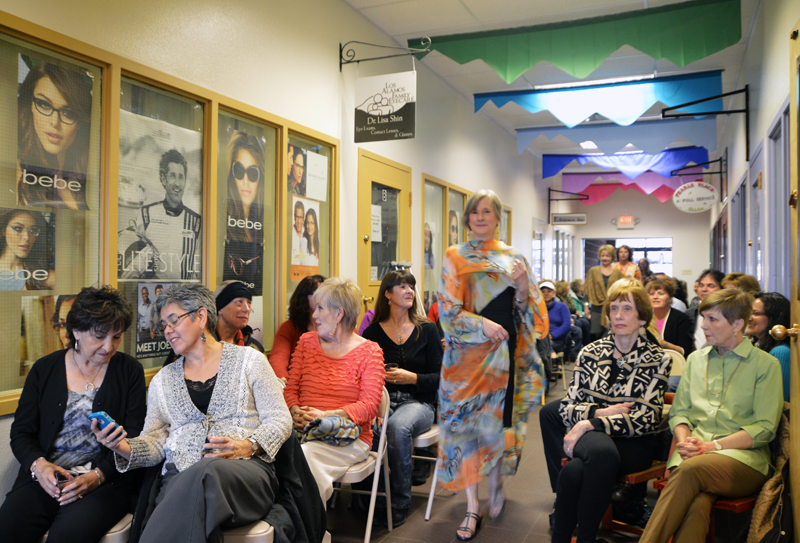 Domino’s in the Smith’s Marketplace Shopping Center on Trinity Drive is open for business and looking to hire 20 more employees. Photo by Carol A. Clark/ladailypost.com 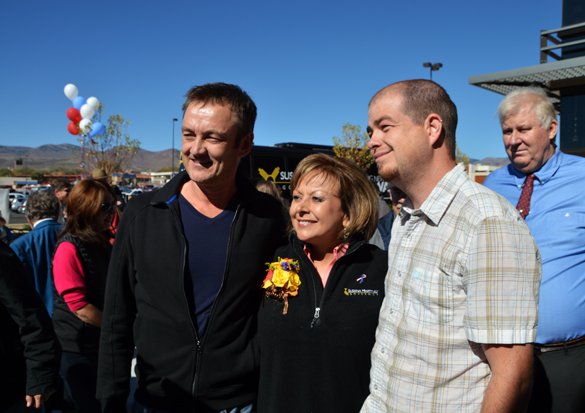 Domino’s General Manager Celesta Lasater Tuesday in the new restaurant was transferred from a Domino’s in Aztec and said that she held a soft opening at 5 p.m. Dec. 30  and the customers packed in ‘like sardine’s. Photo by Carol A. Clark/ladailypost.com 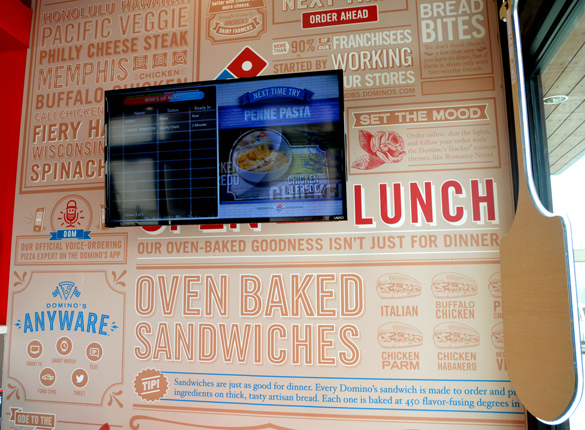 Domino’s is an American pizza restaurant chain headquartered in Ann Arbor, Mich. Founded in the United States by Tom Monaghan and his brother James, today Domino’s is in 81 countries, making it the second-largest franchised pizza chain after Pizza Hut.

In 1960, Tom Monaghan and his brother James purchased DomiNick’s, a small pizza store at 301 West Cross Street in Ypsilanti, Michigan, near Eastern Michigan University. The deal was secured by a $500 down payment, and the brothers borrowed $900 to pay for the store. The brothers planned to split the work hours evenly, but James didn’t want to quit his job as a full-time postman to keep up with the demands of the new business. Within eight months, James traded his half of the business to Tom for the Volkswagen Beetle they used for pizza deliveries. By 1965, Tom Monaghan had purchased two additional pizzerias; he now had a total of three locations in the same county. Monaghan wanted the stores to share the same branding, but the original owner forbade him from using the DomiNick’s name. One day an employee returned from a pizza delivery and suggested the name Domino’s. Monaghan immediately loved the idea and officially renamed the business Domino’s Pizza, Inc. in 1965

The company logo originally had three dots, representing the three stores in 1965. Monaghan planned to add a new dot with the addition of every new store, but this idea quickly faded, as Domino’s experienced rapid growth. Domino’s Pizza opened its first franchise location in 1967 and by 1978 the company expanded to 200 stores. In 1975, Domino’s faced a lawsuit by Amstar Corporation, the maker of Domino Sugar, alleging trademark infringement and unfair competition. On May 2, 1980, the Fifth Circuit Court of Appeals in New Orleans found in favor of Domino’s Pizza.

Domino’s Pizza chose to use its traditional delivery-based business model in China, neither altering its flavors nor reducing the sizes of pizzas, and promising a 30-minute delivery time. The delivery time promise failed due to Chinese automobile traffic patterns stymieing the delivery operations. The large pizza sizes prevented Chinese people from using knives and forks to eat them, and takeout services were unpopular with Chinese people due to cultural reasons. Savio S. Chan (Chinese: 陳少宏; pinyin: Chén Shàohóng) and Michael Zakkour, authors of China’s Super Consumers: What 1 Billion Customers Want and How to Sell it to Them, wrote that Domino’s “failed miserably” in its strategy, resulting in the company being “basically” irrelevant in China, with 40 restaurants as of 2014. By January 2014 the company introduced small restaurants in the China market. Jamie Fullerton of Vice stated that these restaurants served “solid, mildly overpriced pizzas” and did not have unique to China menu items.

In 1998, after 38 years of ownership, Domino’s founder Tom Monaghan announced his retirement, sold 93 percent of the company to Bain Capital, Inc. for about $1 billion, and ceased being involved in day-to-day operations of the company.[19] A year later, the company named David A. Brandon as its CEO.

In 2004, after 44 years as a privately held company, Domino’s began trading common stock on the New York Stock Exchange under the ticker symbol “DPZ”. Industry trade publication Pizza Today magazine named Domino’s Pizza “Chain of the Year” in 2003, 2010, and 2011. In a simultaneous celebration in January 2006, Domino’s opened its 5,000th U.S. store in Huntley, Illinois, and its 3,000th international store in Panama City, Panama making 8,000 total stores for the system. In August 2006, the Domino’s location in Tallaght, Dublin, Ireland, became the first store in Domino’s history to hit a turnover of $3 million (€2.35 million) per year. As of September 2006, Domino’s has 8,200+ stores worldwide, which totaled $1.4 billion in gross income.

In 2007, Domino’s introduced its Veterans Delivering the Dream franchising program and also rolled out its online and mobile ordering sites. In 2008, Domino’s introduced the Pizza Tracker, an online application that allows customers to view the status of their order in a simulated “real time” progress bar. The first Domino’s with a dining room opened in Stephenville, Texas, giving the customers the option to either eat in or take their pizza home. Since 2005, the voice of Domino’s Pizza’s US phone ordering service has been Kevin Railsback.

In a 2009 survey of consumer taste preferences among national chains by Brand Keys, Domino’s was last — tied with Chuck E. Cheese’s. In December that year, Domino’s announced plans to entirely reinvent its pizza. It began a self-critical ad campaign in which consumers were filmed criticizing the then-current pizza’s quality and chefs were shown developing a new pizza. The new pizza was unveiled that same month. The following year, 2010 and Domino’s 50th anniversary, the company hired J. Patrick Doyle as its new CEO and experienced a 14.3  percent quarterly gain. While admitted not to endure, the success was described by Doyle as one of the largest quarterly same-store sales jumps ever recorded by a major fast-food chain.

In 2015, Dominos unveiled a special “pizza car” that can carry 80 pizzas, sides, 2-liter bottles of soda and dipping sauces. It also has a 140-degree oven on board and is more fuel efficient than a standard delivery car. Officially named the DXP, the car is built on the Chevy Spark platform and each car will be retired once it hits 100,000 miles.

In August 2012, Domino’s Pizza changed their name to simply Domino’s to emphasize their variety of non-pizza product such as chicken wings, apple pies, lasagna and pasta. At the same time, Domino’s introduced a new logo that removed the blue rectangle and text under the domino in the logo, and changed the formerly all-red domino to be blue on the side with two dots and red on the side with one dot.

The Domino’s menu varies by region. The current Domino’s menu in the United States features a variety of Italian-American entrees and side dishes. Pizza is the primary focus, with traditional, specialty, and custom pizzas available in a variety of crust styles and toppings. In 2011, Domino’s launched artisan-style pizzas. Additional entrees include pasta, bread bowls, and oven-baked sandwiches. The menu offers chicken side dishes, breadsticks, as well as beverages and desserts.

From its founding until the early 1990s, the menu at Domino’s Pizza was kept simple relative to other fast food restaurants, to ensure efficiency of delivery. Historically, Domino’s menu consisted solely of one pizza in two sizes (12-inch and 16-inch), 11 toppings, and Coca-Cola as the only soft drink option.

Domino’s tapped into a market trend toward bite-size foods with spicy Buffalo Chicken Kickers, as an alternative to Buffalo Wings, in August 2002. The breaded, baked, white-meat fillets, similar to chicken fingers, are packaged in a custom-designed box with two types of sauce to “heat up” and “cool down” the chicken.

In August 2003, Domino’s announced its first new pizza since January 2000, the Philly Cheese Steak Pizza. The product launch also marked the beginning of a partnership with the National Cattlemen’s Beef Association, whose beef Check-Off logo appeared in related advertising. Domino’s continued its move toward specialty pizzas in 2006, with the introduction of its Brooklyn Style Pizza, featuring a thinner crust, cornmeal baked in to add crispness, and larger slices that could be folded in the style of traditional New York-style pizza.

In 2008, Domino’s once again branched out into non-pizza fare, offering oven-baked sandwiches in four styles, intended to compete with Subway’s toasted submarine sandwiches. Early marketing for the sandwiches made varied references to its competition, such as offering free sandwiches to customers named “Jared,” a reference to Subway’s spokesman of the same name.

The company introduced its American Legends line of specialty pizzas in 2009, featuring 40 percent more cheese than the company’s regular pizzas, along with a greater variety of toppings. That same year, Domino’s began selling its BreadBowl Pasta entree, a lightly seasoned bread bowl baked with pasta inside, and the Lava Crunch Cake dessert, composed of a crunchy chocolate shell filled with warm fudge. Domino’s promoted the dessert by flying in 1,000 cakes to deliver at Hoffstadt Bluffs Visitor Center near Mount St Helens in Washington State.

In 2010, shortly after the company’s 50th anniversary, Domino’s changed its pizza recipe “from the crust up”, making significant changes in the dough, sauce, and cheese used in their pizzas. Their advertising campaign admitted to earlier problems with the public perception of Domino’s product due to taste issues.

In September 2012, Domino’s announced it was going to roll out a pan pizza Sept. 24, 2012. Following this move, the Deep Dish pizza was discontinued after 23 years of being on the menu. In December 2013, Domino’s Pizza, in Israel, unveiled its first vegan pizza, which uses a soy-based cheese substitute.