The many incarnations of power and control that manifest as domestic discord and violence are generally traceable to a need for by individual in a relationship to be totally in charge of another. Historically, major events and incidents can be attributed to one of two things: need and greed. So it is in the domestic arena as well.

The need for power may emanate from some long-ago experience of helplessness, some occurrence that has demonstrated a notable advantage to the stronger over the weaker partner, a workplace or social situation in which one is reminded of his/her lower position as compared to others in the same setting,or perhaps even some genetic predisposition.

Definitions of power and control offer some insight into applications to domestic situations:

Power – the ability to do something or act in a particular way, especially as a faculty or quality; the capacity or ability to direct or influence the behavior of others or the course of events.

Control – the power to influence or direct people’s behavior or the course of events; the ability to manage some object; the restriction of an activity, tendency or phenomenon; the power to restrain something, especially one’s emotions or actions; a means of limiting or regulating something. Synonyms include jurisdiction, sway, authority, command, dominance, mastery, etc.

The differences are subtle but nonetheless real. Manifestations of power and control in domestic situations are best exemplified by what is known as the “Circle of Violence” from The Duluth Model, an approach to addressing domestic violence that takes the blame off the victim and places accountability on the offender. 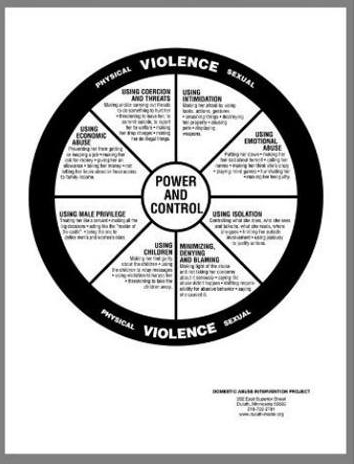 (For detailed information about this approach, which includes Coordinated Community Response or CCR, go to www.theduluthmodel.org)

While The Duluth Model advocates “Social Change to End Violence Against Women,” it does not go unnoticed that many men are also victims of this societal scourge. As documented by the National Coalition Against Domestic Violence, one in four men has been physically abused by an intimate partner.

This topic and others will be examined in some detail in this series with reference to the concepts of power and control. In many respects, the possession of the power (the ability to earn more money, the capacity to influence others, the capability to exert physical force, for example) provides the pathway to the control (“If you leave, you’ll be penniless; I’ll make you lose your job; I’ll beat you to a pulp.”)

The conclusion to be drawn from all this is that when two people unite their lives to some extent, be it an intimate partner relationship, a marriage, or even a strongly invested friendship, each party allows the other access to some form of power. Without some degree of power, there can be no assumption of control. It is in the misuse, the corruption of power that control becomes abusive and ultimately intolerable.

This perversion of power lends credence to some of the reasons people stay in abusive relationships: fear, economic necessity, isolation, even love.The purpose of this series is not merely to offer definitions and explanations, but also to offer resources and possible solutions. Everyone deserves to be safe.