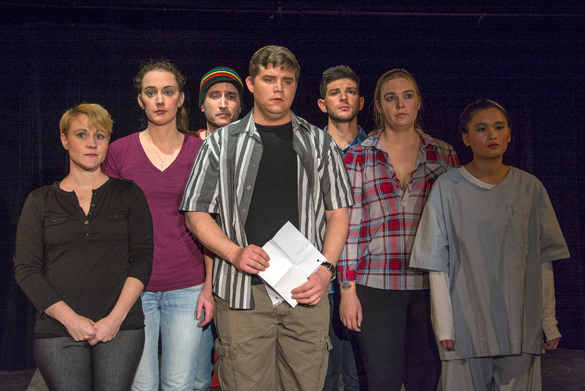 The cast of ‘Dog Sees God: Confessions of a Teenage Blockhead’, which opens at 7:30 p.m. today at the Los Alamos Little Theatre. Photo by Larry Gibbons

Theatre can span the gamut of human experience — it can be hilarious, enlightening, heart wrenching or disturbing.

In “Dog Sees God: Confessions of a Teenage Blockhead,” the next production by the Los Alamos Little Theatre, all these elements come to the fore.

The play, written by Bert V. Royal, follows a group of childhood friends, now in high school, dealing with tough issues for which they are not well equipped, such as death, sexual identity, and bullying. The play is suitable for mature audiences only. Parental discretion is advised.

The characters will be familiar to readers of a certain comic strip, but the teenagers they have become provide a disturbing reflection of reality — profane, often vulgar, sometimes cruel, and restlessly searching.

“This play slaps you in the face and forces you to confront issues you would hope high school students don’t have to go through,” said Patrick McDonald, who plays the bullied outcast Beethoven, who finds solace in the piano. “The play is forcing me to pull off the scab from my own adolescent experience.”

The most recent survey results revealed that sexual dating violence, suicide ideation and bullying among Los Alamos students were higher than the state average.

Paige Ramsey, who plays Marcy, a girl who likes to party, said that Dog Sees God “touches on issues we often try to hide. This is an awareness play. We all know there are dark stories out there and this show brings them to light.”

“This play may be disturbing to some, but it covers issues people in the community need to be aware of,” said Jacinta Lestone, who plays Marcy’s close friend Tricia. “I grew up here and the issues the play deals with really hit home for me.”

“This is an important play to see because even if you have not dealt directly with issues like suicide or sexual identity, you probably know someone who has,” said Zachary Brounstein, who plays Matt, formerly a slob and now a germaphobe. “And it’s not only a compelling story line, it is also aesthetically pleasing.”