Does Wilder’s Masterpiece Hold Up In 2015? 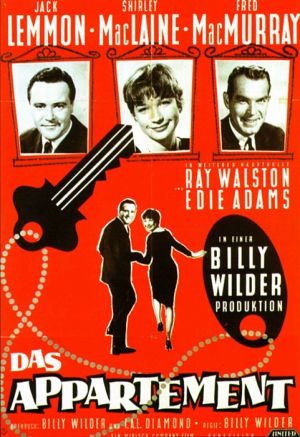 Decide how it holds up to contemporary standards Thursday when the film re-ignites the big screen at Mesa Public LIbrary.

One of the last black-and-white films to win an Oscar for Best Picture, director Billy Wilder’s “The Apartment” is a quiet comedic drama about a man, C.C. Baxter (the young, ungrumpy Jack Lemmon), who has devised a creative if ethically misguided way to distinguish himself from his 32,000 or so co-workers at Consolidated Life, an insurance company in New York.

Baxter has been lending his cozy, well-located apartment to the higher-ups at his office for their extramarital enjoyments, hoping they’ll put in a good word for him with Mr. Sheldrake (Fred MacMurray) up on the 27th floor.

But as the old gypsy curse says, be careful what you wish for. When his plan succeeds, not only does he have the usual problems associated with avoiding his own domicile in the middle of the night, but Sheldrake’s girl is someone Baxter knows and would really like to have in his apartment sans Sheldrake.

The film has plenty of jokes. The doctor next door (Jack Kruschen) can’t help but assume what his neighbor is doing, with a different girl shrieking merrily through the walls every night. Miss Kubelic (Shirley MacLaine) has a quick comeback for anyone bold enough to speak to her. And Baxter himself has a quirky sense of humor, some of which clearly comes from having been a bachelor so long and teaching himself how to cook.

Yet, I didn’t laugh very much watching this. I didn’t respond much to the sweet spots, either. The problem might be Baxter. He doesn’t seem ambitious or conniving enough to have started the whole apartment-sharing scheme in the first place. Or, the problem might be that modern movies (and shows like “Madmen”) have done so much more with the same basic kind of material.

In 1960, “The Apartment” might have been fresh, original, and daring. It’s interesting now more as a piece of history: Wilder. Lemmon. MacLaine. Manhattan in a different era.

“The Apartment” will screen at 6:30 p.m. Thursday, in the upstairs meeting room “theater” at Mesa Public Library. Admission is free.

The Free Film Series, supported by the Friends of Los Alamos County Libraries, offers a new title the first Thursday of (nearly) every month. March 5, the series will present “Of Gods and Men” and  April 2, “Laura.”