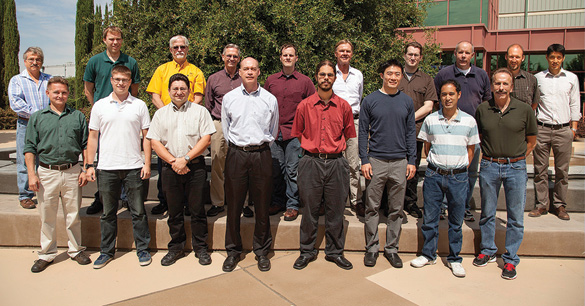 Anthony Rivera, top left, was photographed in 2013 with the team that won a 2013 R&D 100 award for developing a ‘Laser SHIELD’ that identifies potential harmful pulses in real time. Courtesy/LLNL

On the same day that senior engineer Anthony T. Rivera was escorted out of his workplace at Lawrence Livermore National Laboratory “with intent to dismiss,” Department of Energy Secretary Ernest Moniz wrote a memorandum to his staff asking for a personal and professional commitment to a culture of safety. “Federal, laboratory, and contractor workers.” Moniz wrote, “have the right to identify and raise issues that affect their safety and health or that of their co-workers openly and without fear of reprisal.”

That was Sept. 20, 2013, and it was the kind of paradox that shouldn’t surprise anybody. Every few months, if not more often, somebody in the DOE complex swears to try harder to do better, to follow all the rules and regulations, to encourage an open work place, where safety and other concerns can be freely shared. Correspondingly, every few months, a congressional report comes out demanding reforms that were demanded 10 or 20 years earlier. The exhortation for coexistence between the department and the people who are often labeled “troublemakers” is old hat, because retaliation against employees who have blown the whistle seems to be one of those deeply embedded institutional behaviors that does not respond to normal intervention.

Most recently Moniz’s memo was cited as one of the positive efforts in the department’s efforts to eliminate employer and contractor abuse. But this information was contained in a detailed report by the Government Accountability Office that was mostly about the widespread persistence of the hostile and chilling environment for employees who criticize their employers.

Story after story in the whistleblower record contains the same or similar elements as those found in Rivera’s case, starting with a sudden dismissal after workplace safety complaints, followed by appeals and, not infrequently, law suits, occasionally with substantial settlements for the plaintiffs, but almost always with large taxpayer-funded legal fees for lawyers who represent DOE and their contractors.

This time it may be different.

As he described his situation in an interview this week, Rivera was 50 years old when he unexpectly lost his job. His wife has muscular dystrophy and his daughter was about to start college. He said he was stigmatized by his former employer and when he applied for a job and asked why he no longer worked there, he could only say, “I was dismissed.”

DOE has been criticized for indiscriminately paying too many of these settlements on behalf of their contractors. Quite recently under new congressional scrutiny, the department has vowed to fix this hole in the system by which contractor legal fees are paid for by taxpayers who have very little say in the matter.

A few months after he was out of a job, Rivera filed a whistleblower complaint against Lawrence Livermore National Security LLC, claiming that he was fired in retaliation for raising concerns about safety operations, including the danger of a liquid mercury spill hazard, in the High Explosive Applications Facility, where he had worked for 16 years. The complaint was routinely denied by the DOE Office of Hearings and Appeals OHA and when that decision was appealed, the same office agreed with its earlier ruling.

“It was closed without contacting me, or confirming from my witness that my analysis was correct,” Rivera said.

About a year ago, Rivera filed a formal 708 Whistleblower petition to the Energy Secretary providing further details, as he described them, identifying “numerous contributing factors that enabled LLNS (and arguably other DOE Contractors) to circumvent charges of retaliation through nonexistent penalties for willful false testimony on the part of the contractor, exclusive narrative construction between LLNS and the NNSA Livermore Field Office, where I, the complaining party was excluded from, and failure on the part of OHA to acquire case relevant data and coworker testimony.”

Rivera also applied for unemployment insurance benefits, which was contested by his employer and granted only after an appeal, but the Appeals Judge ruled against the employer, stating, “…The employer has not sustained its burden to show that the claimant’s conduct was willful or wanton under the circumstances and therefore has not shown misconduct. Accordingly, the employer discharged the claimant for reasons other than misconduct….”

It was the first external confirmation Rivera had that his case was not hopeless.

Meanwhile, Rivera’s attorney Anthony P. X. Bothwell filed a complaint in U.S. District Court seeking $5 million in damages among other remedies, against DOE and two DOE officials. In a recent press release summarizing the status of the case, Bothwell named Shiwali Patel, the DOE investigator who determined that Rivera’s case did not merit investigation and Kimberly Davis Lebak, who was then the manager of the National Nuclear Security Administration field office at Lawrence Livermore and who is now the field office manager at Los Alamos National Laboratory.

The Los Alamos field office responded to a request for comment Thursday with a standard statement that they do not comment on legal matters.

One sign of a genuine change in the wind: On Aug. 19, Poli A. Marmolejos, director of DOE’s Office of Hearing and Appeals, issued an order vacating the previous denial and stating he would appoint a new investigator to report on the investigation to advance the process of Rivera’s case.