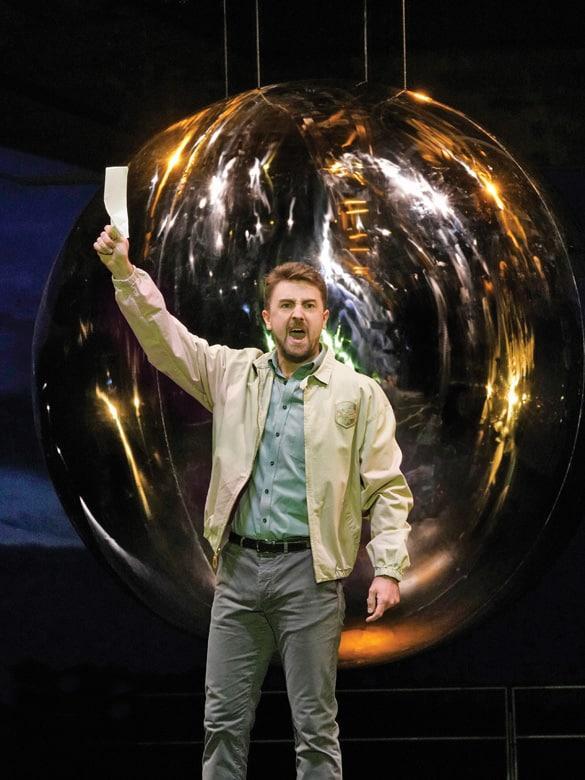 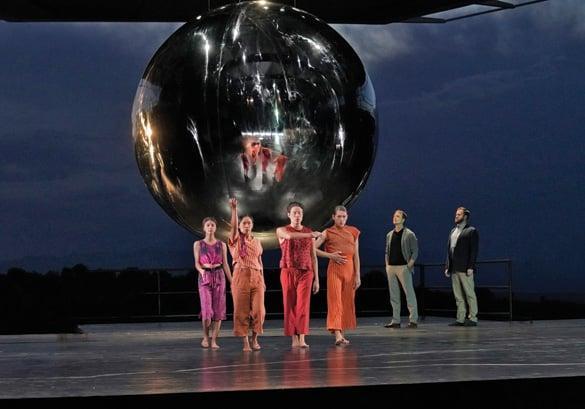 When Ryan McKinney (J. Robert Oppenheimer in this production) was preparing his Amfortis role for Bayreuth’s Parsifal he wrote, “All the joy and suffering of humanity distilled into sound. Beyond words.” John Adams delivers that amalgam of counterpoint in his score. In doing so he uses musiques concrếte, recorded and natural sounds that can be electronically distorted to produce the moods he seeks the audience to experience.

In order to deliver those sounds into the auditorium, his publisher states, “The hiring of a sound designer is a condition/requirement for permission” (to perform the opera). In my seat toward the front of the house opening night the flood of sound impacting my torso was very palpable during the second countdown to the Trinity test.

Peter Sellars in writing the libretto made certain that the words also speak with great impact. Drawing on many sources of poetry, several of which were well known to Oppie and Kitty, and others appropriately drawn from Muriel Rukeyser, the passions and angst of the characters are revealed to us. Sellars has pointed out another Rukeyser concept from her rather long poem, “The Speed of Darkness,” which drives aspects of his production, “The universe is made of stories, not of atoms.”

Sellars had with him at the Prelude Talk two members of the Tularosa Basin Downwinders Consortium who shared their woeful stories of family members that have been victims of fallout from the Trinity test. They also appeared as supernumeraries in some scenes of the opera.

Emily Johnson, the choreographer, has hosted many sessions for groups participating in or affected by the Los Alamos mission from 1943 onward to share their stories. In that way she has devised a very effective staging of principals and others. Very notable are the ensemble dancers from Tewa Pueblos that are like a Terpsichorean chorus moving throughout the stage demonstrating internalized feelings of the characters.

At times they exhibit quivering fragile instabilities of the participants who have things like the weather or the atoms within the gadget on their minds. The gadget is that open ended stainless steel mirror that like a force majeure is never absent.
Another element of the set that seems to have great significance is the black flooring with white streaks that are reflected by the gadget. Possibly they signify a fissure that rents the human fabric.

Our national history since Trinity is abundant in forces that drive us apart, and we can all hope they may be countered by healing forces. Kitty’s last lines (from Rukeyser’s “Dream-Singing Elegy”) are: “We are hopes, you should have hoped us, we are dreams, you should have dreamed us.” Calling our name.

The first event of this year’s Tech and the West, was held in the Lensic Performing Arts Center July 8: A Disruptive Futures Dialogue. Words from Sellars I scribbled in the dark include, “Theater calls back those no longer with us, brute force spends itself; morality remains, story not finished – continues.” In another setting, Sellars referred to Countdown of Act 2 and said that the clock is still ticking. He added that the dropped bombs were not the final episode of WWII, but the first gestures of the Cold War. Sellars hopes that with every collaboration with John Adams that during intermissions and afterwards the thrust of each is on our tongues with ongoing conversations.

One impetus to make this an ongoing conflict that demands our participation is the rejection of prior costuming to the costumes that Gabriel Berry has chosen and re-chosen during the rehearsals. The mortals of this drama appear dressed like ourselves in this continuing crisis as we inhabit a quandary as to how to participate to bring about change.

One especially touching verse is Pasqualita’s Tewa song, “The Cloud-flower Lullaby.” And this production makes a significant leap in adding the Corn Dance of the Rio Grande Pueblos. The traditional pueblo ceremonies combine song, drama, dance and poetry, which forms a prayer for rain, bountiful harvests and the well being of the pueblo and all those who attend.

Before each performance our Tewa neighbors invite us to join them in a spirit of communal reverence. Similar offerings are interpolated into the opera. The Southwest Room of the Los Alamos Mesa Public Library has resources that have enhanced my awareness of the practices that are within the umbrella of caring for the Seventh Generation.

I am grateful to the Santa Fe New Mexican for the five articles in the July 13 issue of the Pasatiempo. That information together with articles in the opera Program Books (copies in each Los Alamos library) have enabled me to focus on the most important elements of this complex work now produced by perhaps the best talents this opera has ever had beginning with the world premiere in 2005.

I asked J. Arthur Freed who holds the world record for most productions seen for his opinion.

Art told me that a few of the productions have had features not included in this production but this is yet a wonderful production. 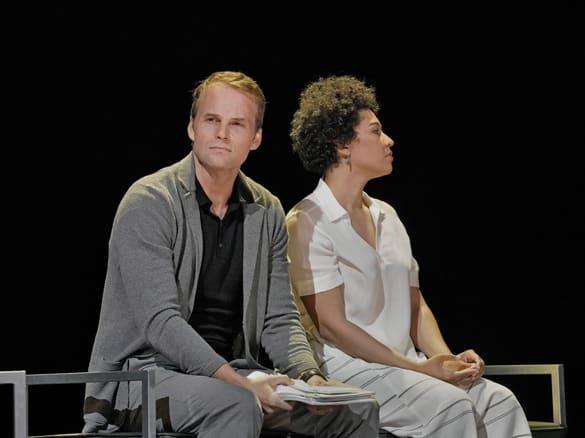 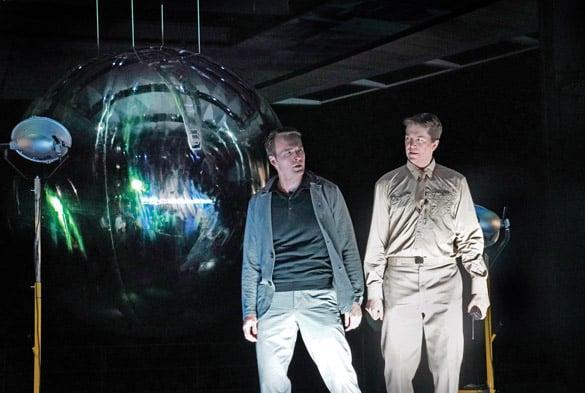