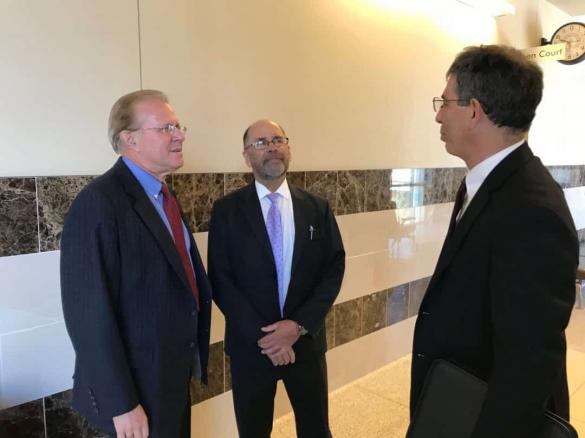 Los Alamos County Council Chair David Izraelevitz said Monday afternoon that he is delighted with the dismissal by First Judicial District Judge David Thomson of a petition to recall him from office.

“I am glad that we have put this issue behind us and I am looking forward to the campaign going ahead and the opportunity to discuss the important issues facing our county,” Izraelevitz said after leaving the courtroom in Santa Fe with his attorney Jack Hardwick and Campaign Manager Phil Gursky.

The petition, filed March 21 by Los Alamos resident Greg White, contains 31 counts alleging wrongdoing by Izraelevitz who is seeking reelection this year. White asked the Court to approve recall for “the leader of the Gang of Five, a group of Los Alamos Councilors gone rogue, plunging Los Alamos into lawlessness not seen since the Dalton Gang”.

In announcing his ruling following the hearing, Judge Thomson said the question before the Court was if the recall election could be conducted before May 1. Article 10, Section 9 of the New Mexico Constitution states that a recall election shall not be conducted after May 1 in a calendar year in which an election is to be held for the office for which the recall is sought if the official sought to be recalled is a candidate for re-election to the office.

Judge Thomson also discussed NMSA 1978, Section 1-21-1 through 4, which describes the procedures for special election and which states that the governing body shall issue a proclamation for a recall election not less than 63 days before the date of the election. The proclamation must be published for two consecutive weeks in a newspaper of general circulation within the county.

The motion to dismiss filed by Izraelevitz said if the Court were to approve the petition for recall, there would still be insufficient time for Council to meet and issue the proclamation. It said White would have had to file his petition Feb. 21 or earlier.

“Mr. White is unhappy with actions taken by the (Los Alamos) County Council, but his appropriate recourse is the voting booth, not the Constitutional recall process,” the motion stated.

Judge Thomson said the question White raised is a good one – what does this court do when confronted with the language of both provisions. He cited case law that states that when a court looks at a statute, it has to take it into account unless it appears the legislation overstepped its constitutional authorities.

“It would appear Article 9, Section D makes some sense as applied in this case as it would appear that if the voters of Los Alamos County find that for whatever reason, whether it’s voting  to have a sheriff or not to have a sheriff, Mr. Izraelevitz will be tested on the ballot in the upcoming general election and so it makes sense that that was contemplated by the drafters of the Constitution and the statute to not have a recall election right before an election in which voters will decide whether or not that individual should represent them,” Judge Thomson said. “And the provisions of 1.24-2, quite frankly I think are obligated in that there must be some notice and due process for voters of Los Alamos to be notified of such an election and have the county clerk prepare and under the provisions outlined in special elections procedures that as a matter of law could not occur in a manner and means to comport with the New Mexico Constitution.”

“For that reason, Mr. White fails to state a claim.  Let me tell you I am granting the motion to dismiss without prejudice. Mr. White, if he has issues either with regard to terms or whatever underlying issues here raised are, I do not feel he is precluded from raising those issues in another manner if he chooses, but the petition filed today or a couple of weeks ago will be dismissed without prejudice,” Judge Thomson said.

“At this time, I’m going to yield to your honor’s wisdom in this. I don’t see proceeding to the Supreme Court with an appeal. I think you used very good reasoning for it and I appreciate that you recognized that I also tried to use good reasoning in my doing this,” White said.

“Realizing that I did this in good faith and did a lot of research and everything, I realize that being indigent and having obtained free process on this I really don’t have the ability to reimburse court fees or attorney’s fees or anything, he said.

Judge Thomson ordered all parties to assume their own costs and fees.

White told the Los Alamos Daily Post Tuesday that the reason he is not appealing Judge Thomson’s ruling is there’s a specific process to be followed and that it’s just unrealistic to think that even if they fast tracked it the Supreme Court would make a ruling before Friday. He said Los Alamos County Clerk Naomi Maestas would need a minimum of at least 10 days to do some sort of hand marked ballot.

“After getting my signature pages printed, it would leave me maybe if I was lucky five days to get 5,000 signatures. The needed number of signatures is only about 3,300 but you have to get at least 5,000 I figure because for various reasons a lot of people will probably get disqualified. For instance, if I signed it Gregory I would be disqualified because I’m registered as Greg,” he said.

One of the counts in White’s petition accuses Izraelevitz of violating Article X, Section 2 of the New Mexico Constitution by “registering with the Los Alamos County Clerk to serve a third consecutive term exceeding the maximum eight-year limit imposed”. Izraelevitz was first appointed to the Council in 2011 to fill a seat vacated when Gov. Susana Martinez appointed Jim Hall to fill a seat in House District 43. Izraelevitz was then elected to the position in 2014. He is seeking a second elected four-year term on the Council. The term limits issue was not resolved in Court Monday.

Many of the other counts in the petition relate to how Izraelevitz and the Council have handled the issue of the duties of the Los Alamos County Sheriff. He accuses Izraelevitz of failing to ask the Council to restore the sheriff’s duties, reinstate the undersheriff and executive secretary’s positions and provide funding for the sheriff’s budget. None of the issues raised by White were resolved by Monday’s ruling other than the recall election itself.