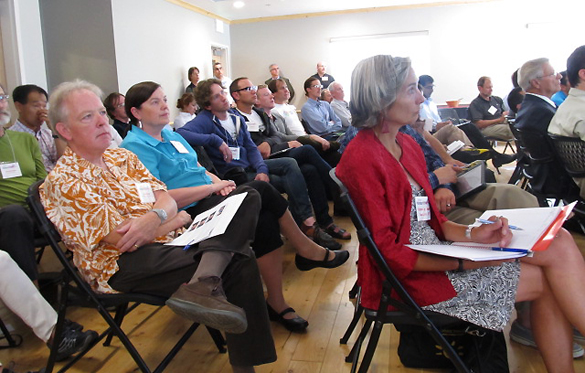 Audience members at the Los Alamos Golf Course Event Center in search of ‘the next big thing’. Photo by Roger Snodgrass/ladailypost.com

DisrupTech auditioned a set of eight creative scientific ideas in the early stages of commercialization out of Los Alamos National Laboratory. With expert feedback from investors and the business community, prospective startups had a chance to see how they stacked up in the public arena at the Los Alamos Golf Course Event Center on Thursday.

Event sponsors added to the competitive interest, by putting a little skin in the game. Two prizes worth $10,000 were at stake.

The idea of disruption associated with technological innovation and startup businesses has been around since at least 1997, when Harvard Business School professor Clayton M. Christenson popularized the concept in his book, The Innovator’s Dilemma.

At first, the message was aimed at managers of existing businesses who might be doing everything right as far as they knew, but were clueless about the unknown transformations that were ready to explode under their feet. Think General Motors and Toyota, or ATT&T and cell phones. In time, as the digital age of headlong change became the dominant trend, the lesson for entrepreneurs was easy to grasp: Better to be the nimble new flash of genius revolutionizing the field than the hobbled old establishment defending its turf. 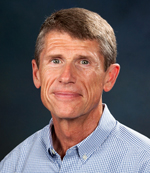 By now, as the DisrupTech program demonstrated, the idea of disruption has a wide range of meanings. Steve Yarbro’s project for “eliminating water in oil and gas fracking,” outlined a technique for replacing water with expanded carbon dioxide polymers as a way of minimizing one of the most critical environmental burdens related to current fracking operations.

Yarbro’s plan is really an extension of existing applications of a technology already in use for inspecting cargo.

A slide described the project with a clever oxymoron – “Green Fracking” 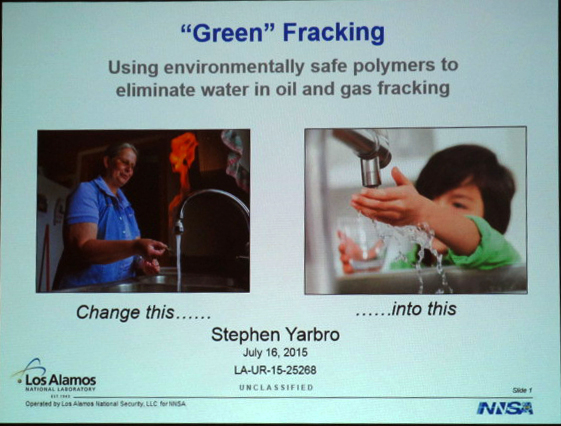 An intriguingly bold project with some obvious pitfalls was presented by Igor O. Usov, who suggested a heroic coupling of “depleted uranium” with “solar energy.” The proposal for a dUO (depleted Uranium Oxide) cell, began with two important facts.

One is that there is a million ton surplus of depleted uranium in the United States, a pile of unwanted waste that continues to grow. The other is that solar cell electricity is still too expensive to compete with fossil fuels, although they are by far more sustainable. 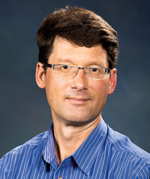 One problem with depleted uranium oxide solar cells might be the word “uranium.” After Usov’s brief talk, a member of the audience asked how he could claim there was “no radiation hazard,” from the cells if they are made with uranium.

“This is a question that everyone wants to ask,” Usov said. “The answer is that the photovoltaic solar cell is not radioactive, but the precursor, the depleted uranium is a radioactive material, much less radioactive than the natural background, but it is radioactive.” He acknowledged that DU gives off “mainly alpha particles,” but that they can easily be blocked. Perhaps known concerns about DU will be answered with a more complete explanation, but until then it would seem to remain an issue.

Another meaning for disruption will have to be found to describe the project proposed by Matt Durham for “Cosmic Plumbing Inspection,” which involves a technology that was developed shortly after the 9/11 airplane hijacking attacks and involves a technology as gentle and non-invasive as cosmic-ray imaging for the nuclear power plant business. “What we’ve developed at LA lab is how to image using only natural, free-range, organic, cruelty-free radiation that comes from space,” Durham said with a smile

His plan, really an extension of existing applications of a technology already in use for inspecting cargo containers for radioactive materials and also now involved in locating remnant radioactive materials after the meltdown of Fukushima Daiichi reactors. The idea is to use the technology, also known as muon tomography, to inspect corroding pipes in aging nuclear power plants, part of the infrastructure that is impossible to monitor without turning lots of switches off and removing the insulation.

As it turned out, Durham’s project won first prize in the competition, worth $10,000 to the cosmic plumbing project. The runner-up, a project by Jim Coons and Andrew Sutton also won $10,000 in matching funds from Lab Directed Research and Development, contingent on securing matching funds from an industry partner. Their technology, called in on Skype from the National Renewable Energy Laboratory in Colorado Springs, is known as FuSS (Fuels Synthesized from Sugars) and has to do with converting biomass into a renewable energy additive for transportation fuels.