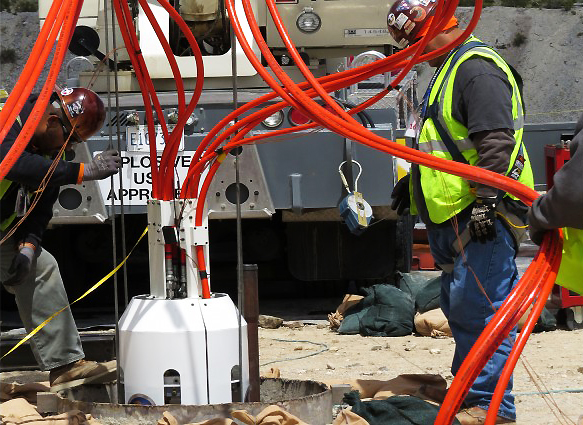 Two workers oversee the emplacement of the canister that contained the chemical explosive charge for Source Physics Experiment-4 Prime at the Nevada National Security Site. Courtesy/LLNL

Three weeks ago, a National Nuclear Security Administration (NNSA) led-team successfully conducted the fourth in a series of experiments designed to improve the U.S. ability to detect underground nuclear explosions.

The Source Physics Experiment (SPE-4 Prime) is a fundamental step forward in the U.S. effort to improve arms control verification, and will eventually be used to assure compliance with the Comprehensive Nuclear Test Ban Treaty (CTBT).

A Lawrence Livermore National Laboratory (LLNL) team played a leading role in fielding the recent Source Physics Experiment (SPE-4 Prime) detonated at the Nevada National Security Site (NNSS). The SPE tests, including the most recent one on May 21, consist of a series of seven underground, high-explosive field tests in hard rock that are designed to improve the United States’ ability to detect and identify low-yield nuclear explosions amid the clutter of conventional explosions and small earthquakes.

“As nuclear monitoring scientists, we are very excited by the new data from SPE-4 Prime,” said Bill Walter, the SPE scientific leader for LLNL and the SPE-5 chief scientist. “It is the most over-buried field explosion in granite from which we have ever obtained data, and the data return and quality look excellent.

“We will be able to compare this new data with the prior SPE shots, which were shallower, allowing us to directly measure and understand the role that the interactions of the Earth’s surface play in generating the signals we observe.”

An LLNL release reports that the SPE-4 Prime experiment was detonated with a chemical explosive equivalent of 196 pounds of TNT in a contained environment 286 feet below ground.

The chemical explosives for the experiment were placed downhole in a one-and-a-half-week process that included a dry run of emplacing a canister without high explosives, Berzins said.

“It had been close to two years since we had our last SPE chemical explosion, so it was great to have this test to produce scientific data for our simulation and modeling work,” said Berzins, who worked on nine of the Laboratory’s 13 subcritical tests between the late 1990s and 2003.

“Livermore took on this challenge and was able to draw upon a wide spectrum of talent to be successful,” he said, noting that a number of Lab employees worked nights and weekends at LLNL and NNSS.

When Livermore and Los Alamos National Laboratory (LANL) conducted nuclear tests from the 1950s through 1992, the tests were conducted in a narrow range of depths and sizes for safety and cost factors.

“We’re trying to expand that range, so we can understand any potential future nuclear tests that would be outside the historic range,” Walter said. “The SPE tests are designed to improve our numerical modeling codes for monitoring nuclear explosions overseas.”

The sensor networks reported a successful data return that will advance current, state-of-the-art ground motion and seismic wave propagation models and algorithms toward a predictive capability.

The release notes that the SPE tests represent a U.S.-interagency-wide endeavor, with NNSA’s NNSS, LANL, LLNL, Sandia National Laboratories and the Department of Defense’s Defense Threat Reduction Agency all serving as partners in SPE-4 Prime, along with the University of Nevada-Reno.

NNSA’s three national laboratories have already used the data from the first three experiments in the series (SPE-1, executed in May 2011, SPE-2, executed in October 2011 and SPE-3 executed in July 2013).

NNSA has published a press release (link is external) on the event.

The next shot in the SPE series, SPE-5, is slated to be staged during the fall at NNSS.