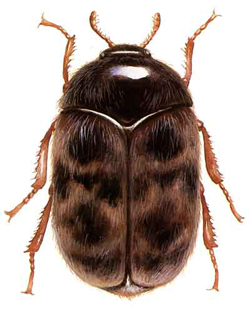 The Khapra beetle (Trogoderma granarium), photographed by the US Department of Agriculture, originated in South Asia and is one of the world’s most destructive pests of grain products and seeds. It is considered one of the 100 worst invasive species in the world. Infestations are difficult to control because of the insect’s ability to survive without food for long periods, its preference for dry conditions and low-moisture food, and its resistance to many insecticides. There is a federal quarantine restricting the importation of rice into the U.S,. from countries with known infestations of the beetle. Source: wikipedia.com
CBP News:
PHILADELPHIA ― U.S. Customs and Border Protection (CBP) agriculture specialists encountered an alarming discovery when they found 60 live Khapra Beetle larvae, 25 cast skins, and 25 dead adults comingled within rice in a household goods shipment Sept. 12 that arrived in Philadelphia from Saudi Arabia
CBP submitted specimens to a U.S. Department of Agriculture (USDA) entomologist who confirmed the specimens last Thursday as Trogoderma granariumEverts, commonly known as Khapra Beetle.
The Khapra Beetle is considered one of the world’s most destructive insect pests of grains, cereals and stored foods and remains the only insect in which CBP takes regulatory action against even while in a dead state.
The Khapra Beetle concern caused the USDA to take action and implement Restrictions on Certain Products Imported From Countries Where Khapra Beetle Is Known To Occur. Noncommercial quantities of rice from Saudi Arabia are among the items prohibited from importing to the United States.
“To see such a large concentration of larvae is alarming and it presents a serious threat to our nation’s agriculture. Customs and Border Protection agriculture specialists took immediate action to quarantine the rice and these highly destructive and invasive insect pests,” said Marge Braunstein, Acting CBP Port Director for the Area Port of Philadelphia. “Safeguarding America’s agriculture industries remains an enforcement priority for CBP, and it’s a mission that we take very seriously.”
The shipment, which was destined to Fairborn, Ohio, contained dried lemons, several open packages of herbs, and one open burlap bag of rice weighing more than six pounds. CBP agriculture specialists inspected a portion of the rice when they encountered the Khapra Beetle colony. CBP discovered additional Khapra Beetles in the bottom of the box.
CBP destroyed the rice, dried lemons and herbs.
The Khapra Beetle is labeled a ‘dirty feeder’ because it damages more grain than it consumes, and because it contaminates grain with body parts and hairs. These contaminants may cause gastrointestinal irritation in adults and especially sickens infants. Khapra Beetles also can tolerate insecticides and fumigants, and can survive for long periods without food.
According to the USDA Animal and Plant Health Inspection Service (APHIS), previous infestations of Khapra Beetle have resulted in massive, long term-control and eradication efforts at great cost to the American taxpayer.
California implemented extensive eradication measures following a Khapra Beetle infestation discovered there in 1953. The effort was deemed successful, but at a cost of approximately $11 million. Calculated in today’s dollars, that would be about $90 million.
CBP Agriculture Specialists have extensive training and experience in the biological sciences and agricultural inspection. On a typical day nationally, they inspect more than 1 million people as well as air and sea cargo imported to the United States and intercept 4,657 prohibited meat, plant materials or animal products, including 464 agriculture pests and diseases.
Learn more about CBP’s agriculture protection mission.
Previous
Next
Menu
Los Alamos
61°
Fair
7:17am6:22pm MDT
Feels like: 61°F
Wind: 0mph W
Humidity: 13%
Pressure: 30.17"Hg
UV index: 0
MonTueWed
min 50°F
73/48°F
73/48°F
Weather forecast Los Alamos, New Mexico ▸
Previous
Next