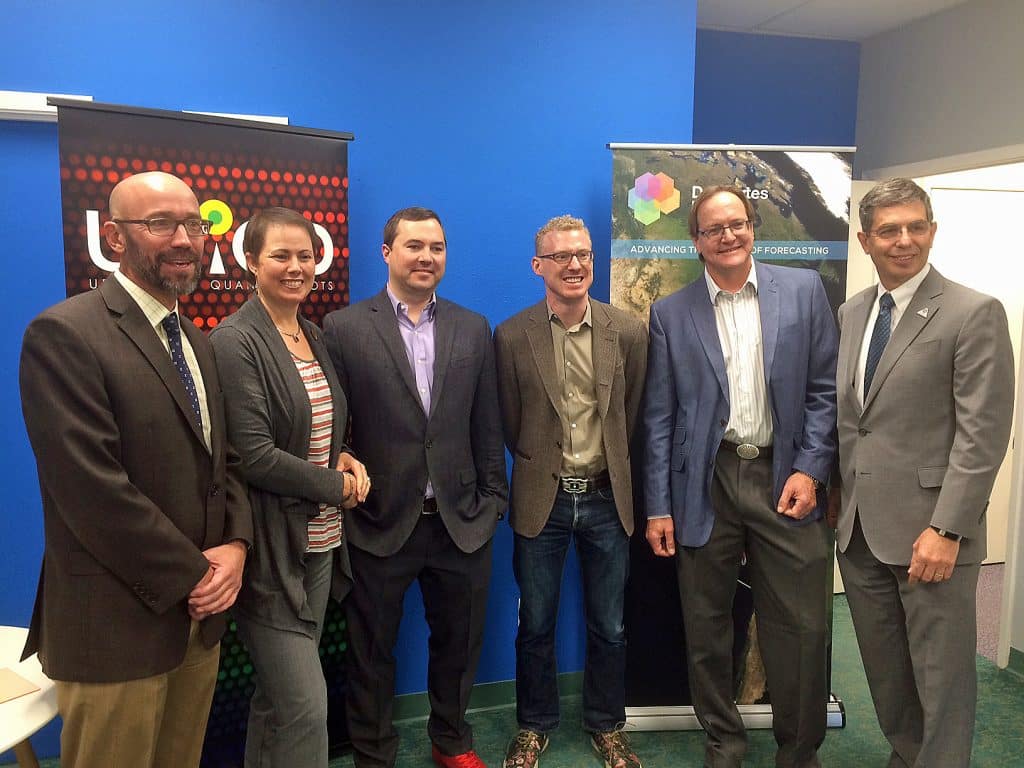 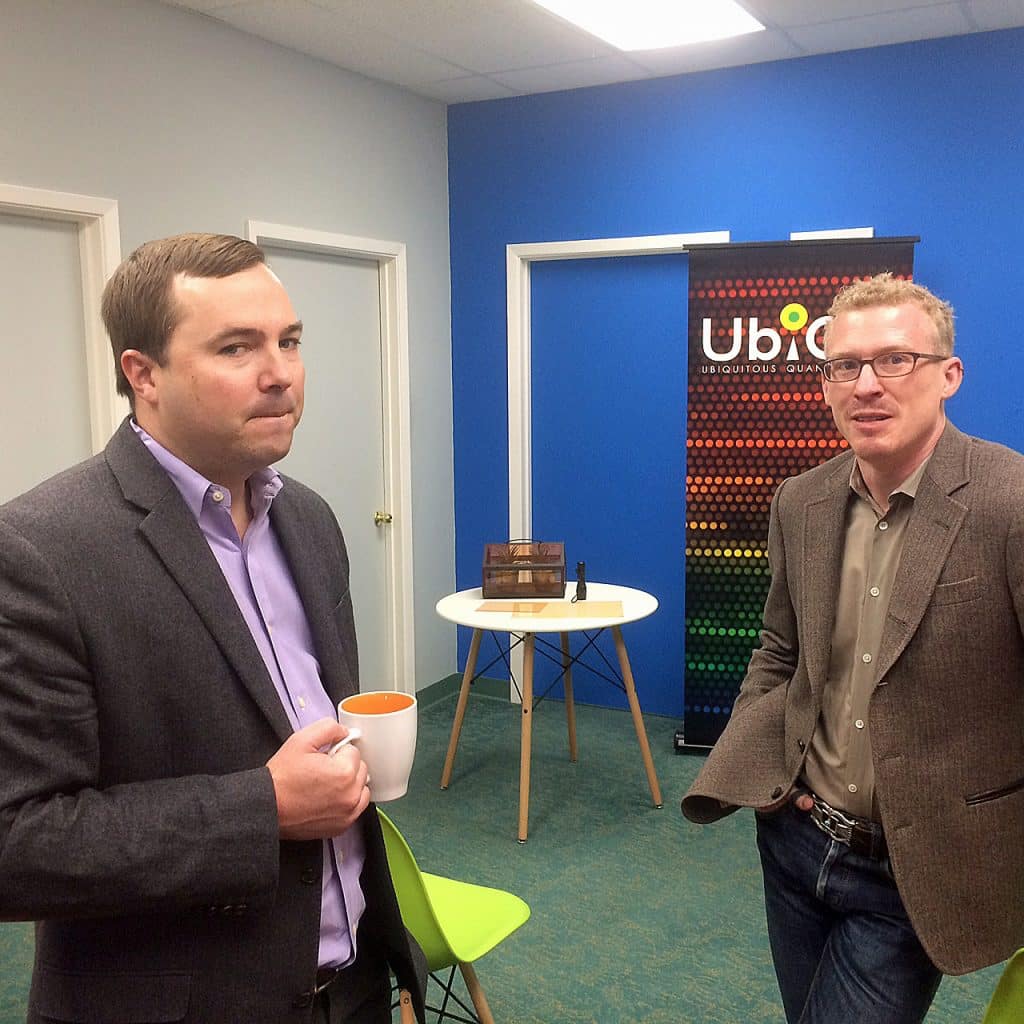 The chief executive officers of two successful companies utilizing technology developed in conjunction with Los Alamos National Laboratory, Hunter McDaniel of UbiQD, LLC, and Mark Johnson of Descartes Labs, announced Monday morning the expansion of their operations and the creation of new high-tech jobs in Los Alamos and Santa Fe.

He said he is excited that the two home-grown companies are expanding their operations here in New Mexico over other places, adding that Descartes will invest millions of dollars to expand their new headquarters in Santa Fe while UbiQD is expanding its operation at their Eastgate location. Descartes is expected to increase its work force from 20 at the beginning of this year to 80 next year, with 50 people currently employed. UbiQD will invest $1 million to create 20 new jobs and expand their headquarters and manufacturing facility.

“These two high-tech companies and every high-tech company in New Mexico have access to a better environment and tools to help them grow and stay in New Mexico. We’ve made huge strides in making our state a better place to create business and jobs and to nurture homegrown tech transfer companies like these,” Geisel said. “But we have more work to do. We have to keep making our state more competitive, keeping the tools we have put in place and making additional changes to be regionally and nationally competitive with our peer states.”

He told McDaniel and Johnson he looks forward to seeing their businesses grow throughout the years and being economic value to the state and the “two fine communities” of Santa Fe and Los Alamos.

Mayor Gonzales said he was grateful for the partnership during the last 3.5 years with the Secretary and the Department adding that the investment of more than $2.7 million in the City of Santa Fe will lead to more than 400 new jobs, “everything from brewmasters to scientists with Descartes Labs”. He said Santa Fe invested $100,000 in Descartes, calling it a critical investment that will bring jobs and opportunities into the community.

“Equally important, if you’ve met the folks at Descartes, they will lower the average age of the people who live in our city,” Gonzales quipped.

He commended LANL for understanding that if the Lab is to continue to grow, it has to have an ecosystem for start-ups and entrepreneurs that are taking advantage of the technology being developed on “the hill” at Los Alamos, whether they are in Los Alamos, Santa Fe, Espanola or around the region.

“We just need them to be able to access that technology so that they can continue to grow,” Gonzales said.

Council Chair Izraelevitz said UbiQD and Descartes Labs are great examples of the exciting things that can happen when you bring together dedicated groups of business-minded, creative individuals to tackle a problem.

“I may be biased, but I think Los Alamos has some of the brightest minds in the world working at LANL and I am proud to have local start-ups such as UbiQD and Descartes that were launched right in our neighborhood,” he said. “Partnership with UbiQD to fund a loan under the Local Economic Development Act is a testimony of what we can accomplish as a community to further our goals to become a more supportive, business-ready environment, a place that attracts the best and brightest to live and work in Northern New Mexico.”

Izraelevitz said planning and patience is needed to achieve those goals, adding that nearly half of all small businesses in the country fail in the first five years and that only 30 percent are still viable in 10 years.

“We’re making serious inroads in the LANL technology transfer area,” he said. “These are heady times for our community, even for all of Northern New Mexico. Los Alamos is on the brink of several exciting prospects that will bring is into 2018 and beyond. We are well-poised to work with entrepreneurs that are interested in engaging with us to explore multiple possibilities to include land options, grants, loans and technical support.”

“Together with the state we stand ready to offer out continued assistance, resources and partnership with our Economic Development Department to turn viable ideas into creative solutions, bring new jobs, expanded growth and intriguing opportunities that allow us to continue to diversify our economic base here in Los Alamos, Northern New Mexico and the rest of the state,” he concluded.

McBranch said the Lab has about 2,200 PhDs and if they add in all the ex-Lab people who have start-ups, they would number a few hundreds.

“I think many of us realize a healthy ecosystem will have a stronger equilibrium between that talent base,” he said. He added that eight or 10 postdocs had left the Lab to go to Descartes Labs and that McDaniel had also hired several postdocs from the Lab.

“We will be delighted when some of these companies mature to a point where some of their staff starts to come back to the Lab,” he said.

McBranch said he wanted to point out a couple of trends the two companies represent that the Lab would like to amplify and build on.

“With UbiQD, Hunter (McDaniel) got started here after doing a postdoc at the Lab and it was a pretty tough go. We didn’t make it real easy for him to succeed but he did it here,” he said. “Part of that learning experience for us is to try to urge more postdocs to make that move.”

McDaniel said the Lab has between 250 and 300 postdocs at any given time and that’s the primary source for the technical staff at the Lab, comprising some 80 percent.

“We’re still only hiring about half the postdocs that come and work for us so by and large, the people who come here and spend about two or three years at the Lab will leave the region and work somewhere else. What we’re seeing now in the postdoc and PhD workforce is really a new demographic that wants to explore the entrepreneurial world,” he said. “In the past, a PhD scientist would look for a job at a big industrial lab, a national lab or as a professor at a university. Big industry and university jobs are narrowing and entrepreneurial communities are expanding.”

Descartes Labs has developed artificial intelligence technology that analyzes petabytes of data from thousands of global satellites. The company has successfully used the technology to predict crop yields around the world which has profound implications in moving global markets, providing predictive analytics for insurers, preventing famines, and tracking climate change. Their technology also has potential applications for defense and intelligence agencies, as well as a myriad of other corporate uses. 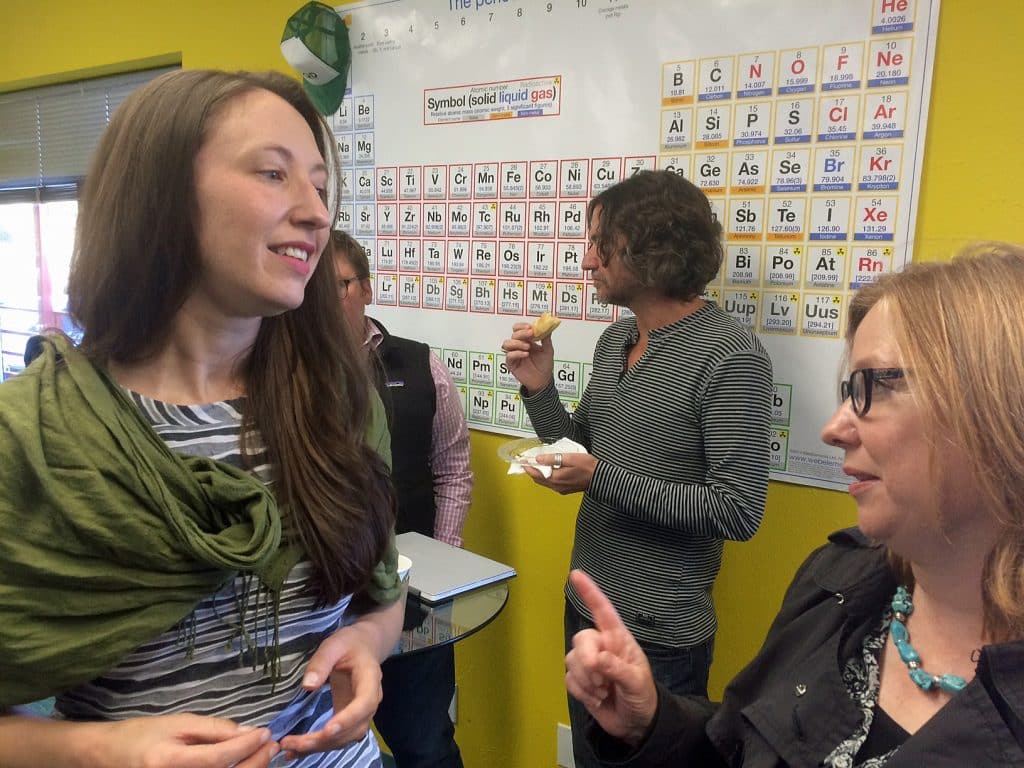 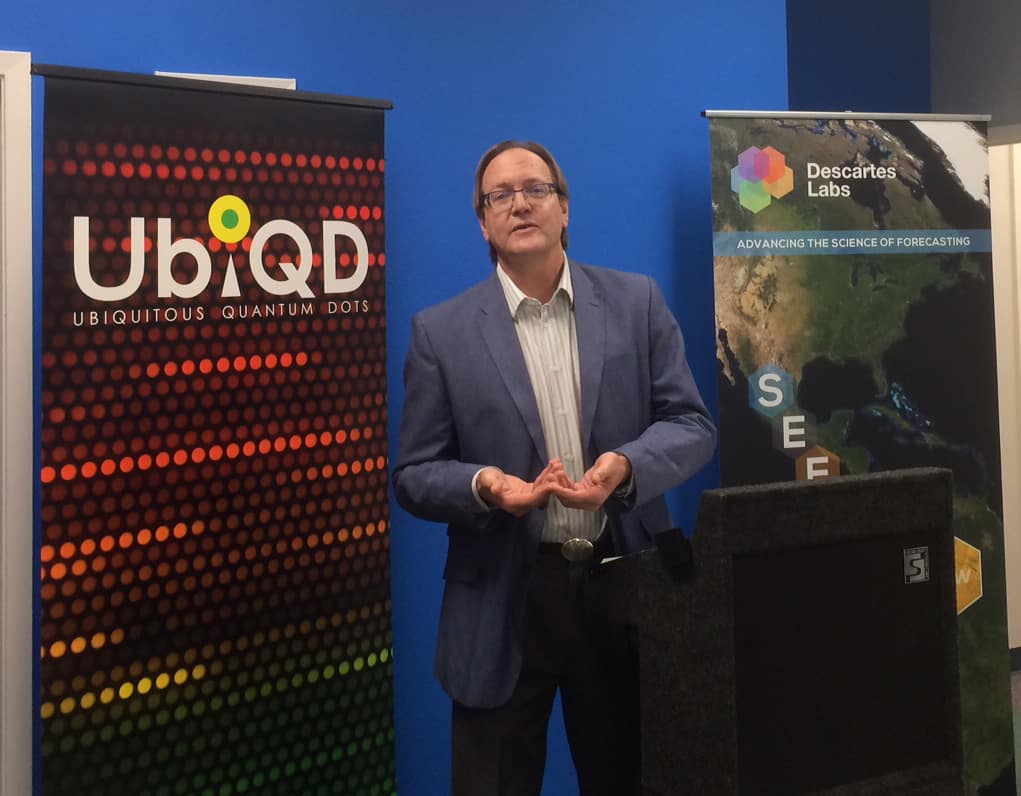 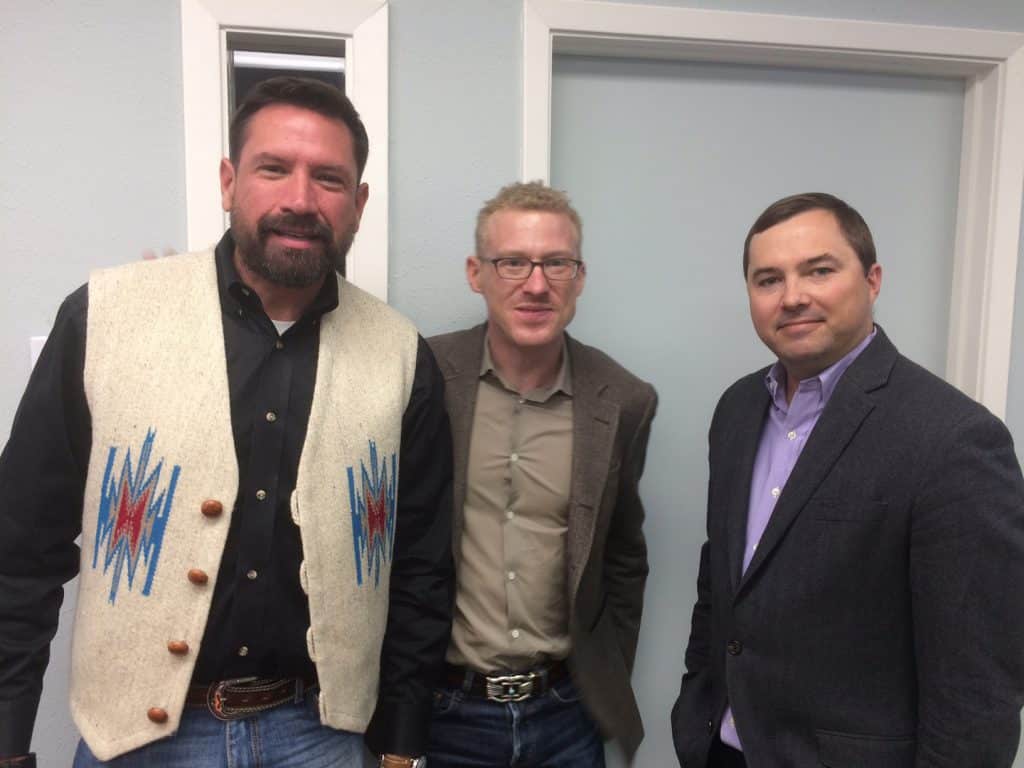 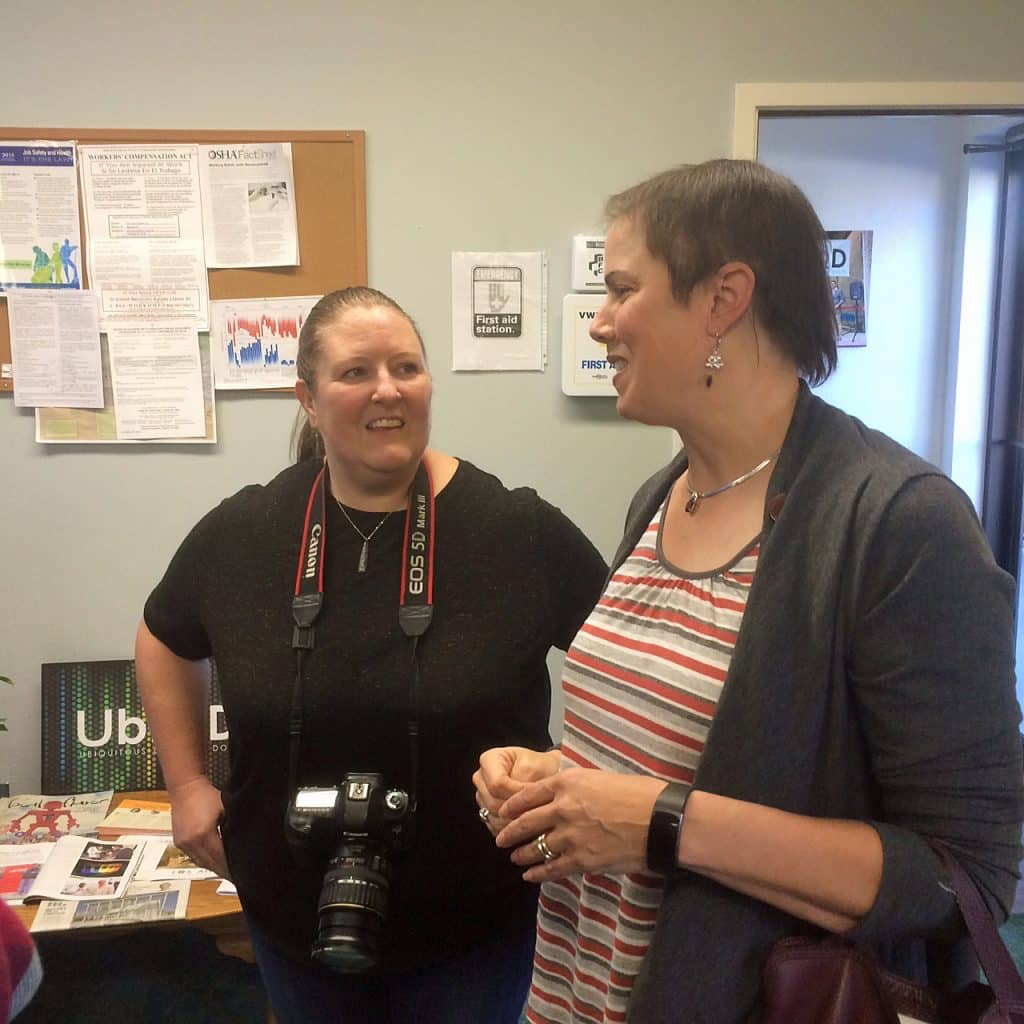 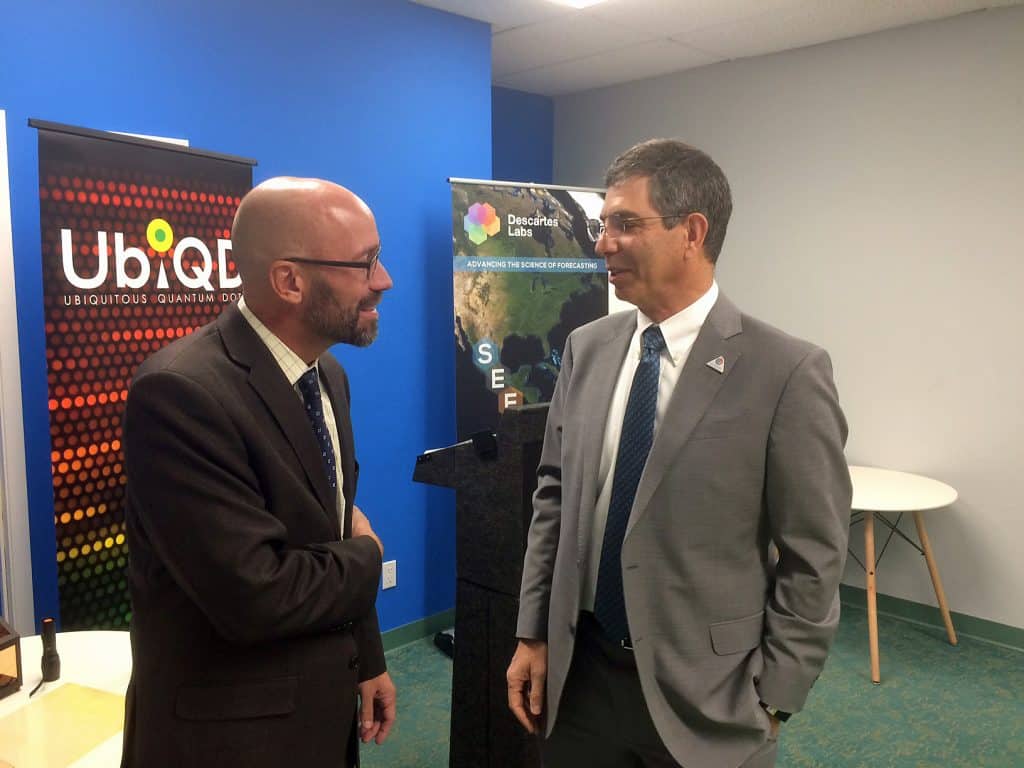 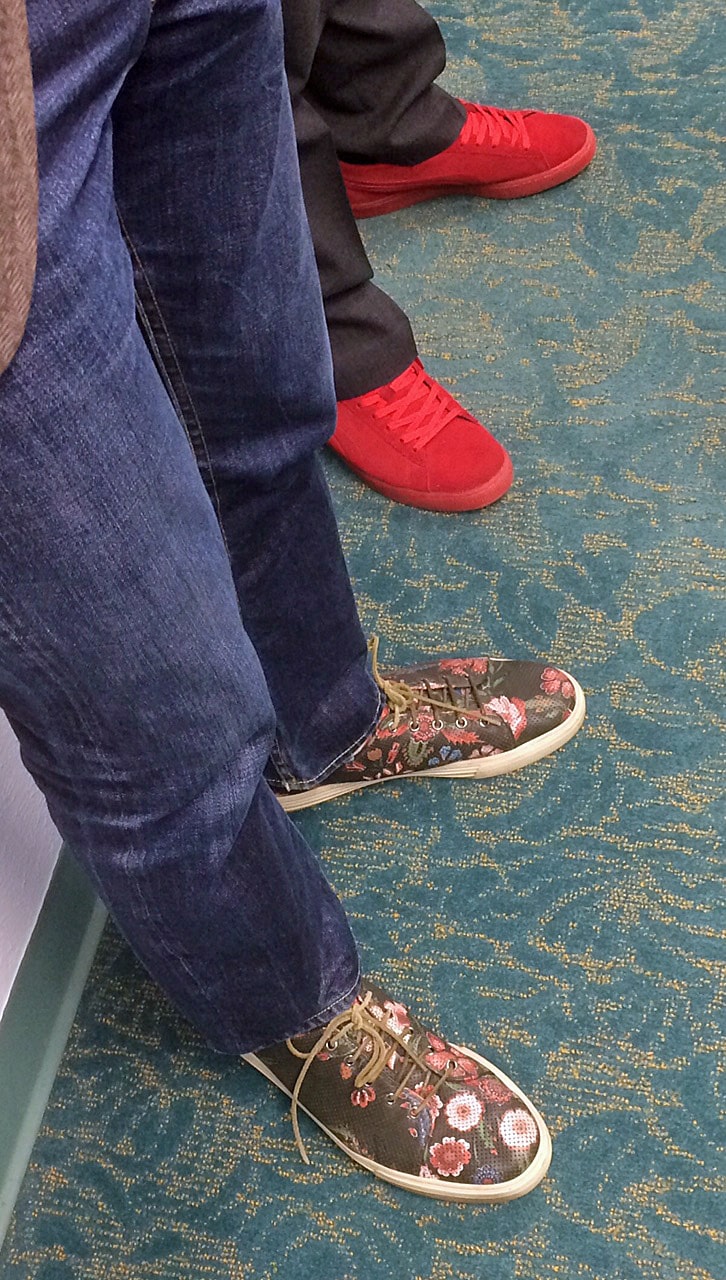 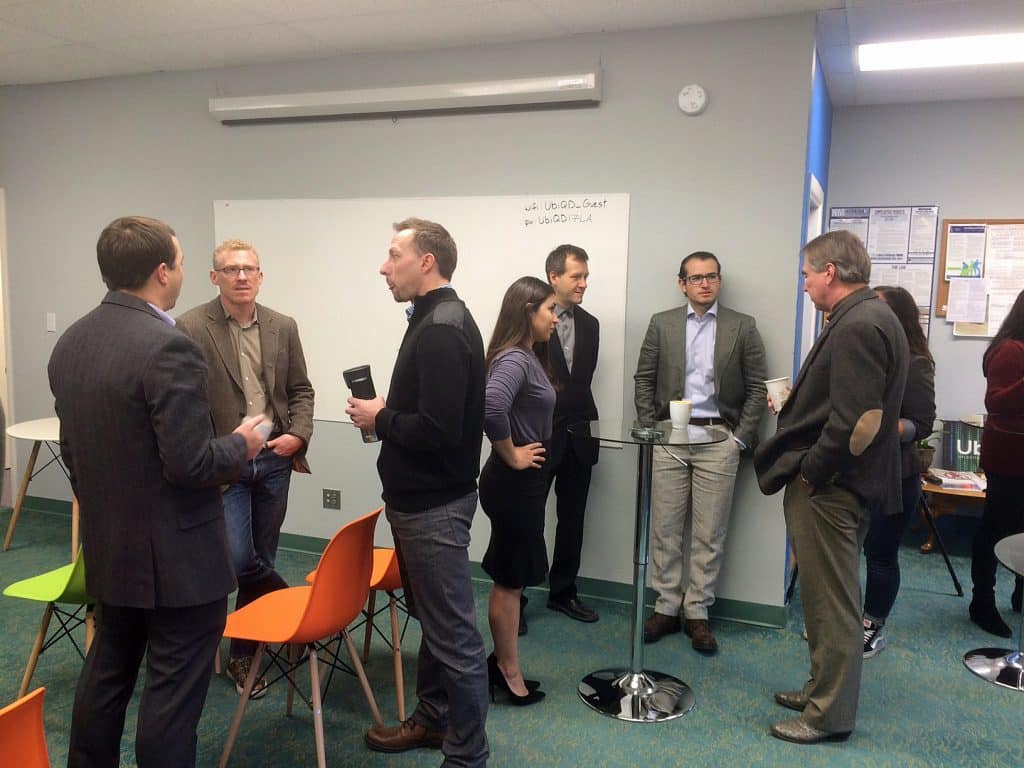 Scene from Monday’s celebration at UbiQD. Photo by Maire O’Neill/ladailypost.com 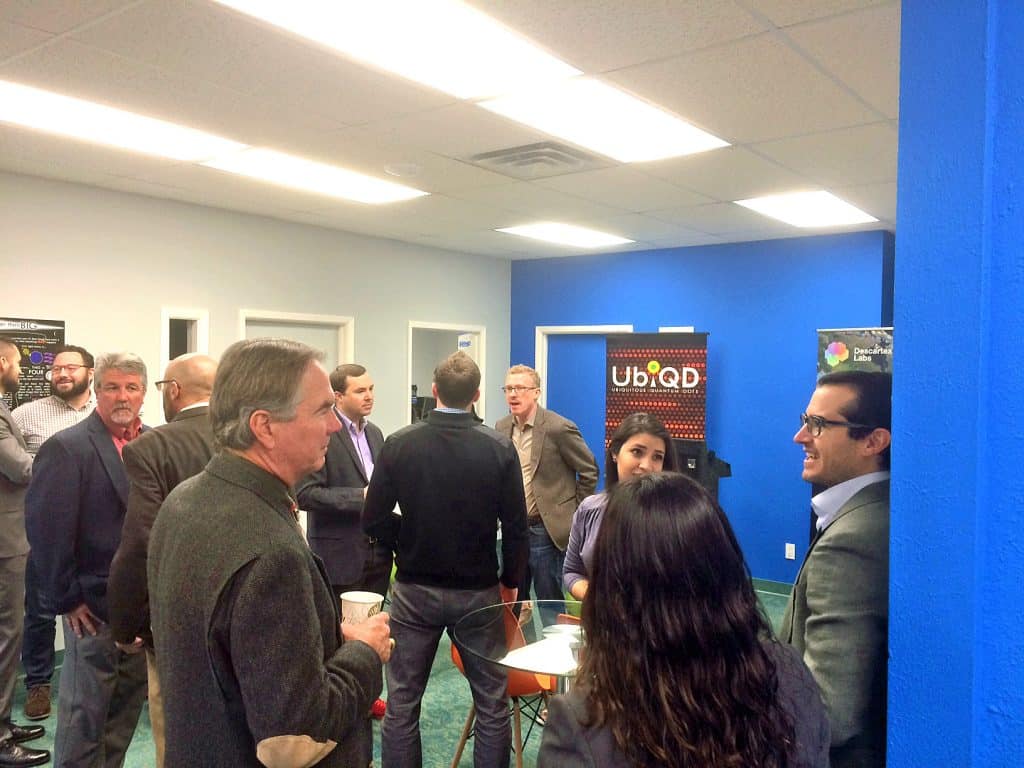 Scene from Monday’s reception at UbiQD. Photo by Maire O’Neill/ladailypost.com