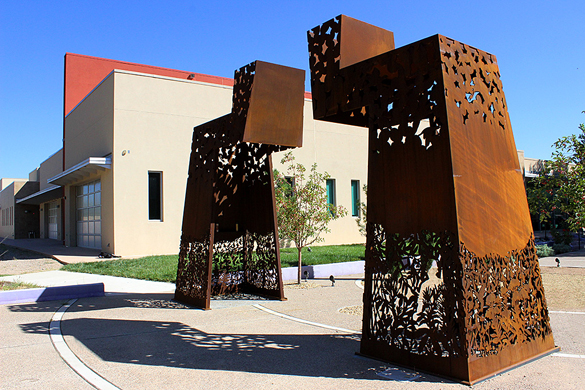 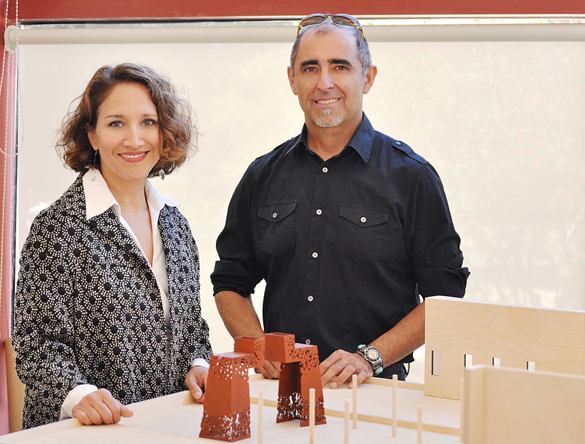 Cristina Gonzales and Jacob Sisneros with mockette of Warriors Repose. Courtesy/González + Sisneros Studio
NHCC News:
ALBUQUERQUE ― The Department of Cultural Affairs, National Hispanic Cultural Center, New Mexico Arts, and the families of Manuel Mora and Pete Padilla are proud  to announce the upcoming dedication of two, completed sculptures to pay tribute to the sacrifices made by Hispanic veterans and, in particular, Pete Padilla and Manuel Mora.
The dedication is 10 a.m., Veteran’s Day, Nov. 11, in the Manuel Mora and Pete Padilla Memorial Park on the National Hispanic Cultural Center campus.
Confirmed speakers at the dedication include New Mexico Lt. Gov. John Sanchez, Cultural Affairs Cabinet Secretary Veronica Gonzales, Col. Robert Cortez, NHCC Board President Christopher Saucedo, NHCC Executive Director Rebecca Avitia, representatives of the Padilla and Mora families, Cristina González, Jacob Sisneros, and Reynoldo “Sonny” Rivera.
Warriors Repose, by artists Cristina González and Jacob Sisneros, is one of the two sculptures to be dedicated. This sculpture was commissioned through capital funds appropriated for the Memorial Park.
The architectural form of Warriors Repose is inspired by the grand serpent columns atop the Temple of the Warriors at Chichen Itza, a Pre-Columbian temple built in honor of warriors.
The sculpture consists of two identical, 15-foot tall, CorTen steel structures, almost lace-like in appearance, facing one another to form a literal and metaphorical connection between the Rio Grande Bosque and the NHCC campus, with one structure dedicated to Padilla and the other to Mora.
The second sculpture to be dedicated is a more traditional likeness of Mora and Padilla, by artist Reynaldo “Sonny” Rivera. This sculpture was commissioned through New Mexico Arts.
Intended to capture the moment when soldiers take a break from being out in the field, Rivera is reflective of the reality that while “all gave some, some gave all,” and created the work to memorialize the memories of Padilla and Mora for their families, friends and community.
In addition to the dedication, the National Hispanic Cultural Center will also be hosting several ancillary events honoring veterans and their service during the same week.
These include a screening at 7 p.m., Nov. 12, in the Bank of America Theatre, of the PBS documentary, On Two Fronts: Latinos & Vietnam, examining the Latino experience during the war and framing the discussion with the memoires of Everett and Delia Alvarez, one who was a prisoner of war and the other who protested the war from home.
The showing will be accompanied by a discussion with filmmaker Mylene Moreno. At 7 p.m., Nov. 13, in the Bank of America Theatre, a panel will also be held entitled, A Legacy of Service:
National and Local Hispanic Service in the Military. The panel will explore the long tradition of Hispanic service in the military, both nationally and through the stories of local community members, including Padilla and Mora. Speakers include John Garcia.
Finally,  Nov. 14, a private community gathering will be held for the families.
The National Hispanic Cultural Center is dedicated to the preservation, promotion, and advancement of Hispanic culture, arts, and humanities, and is a division of the New Mexico Department of Cultural Affairs. New Mexico Arts’ primary function is to provide financial support for arts services and programs to non-profit organizations statewide and to administer the 1% public art program for the state of New Mexico, and it is also a division of the New Mexico Department of Cultural Affairs.

For information about this show or other events at the NHCC, call Alberto Cuessy at 505.238.2695 or email alberto.cuessy2@state.nm.us. 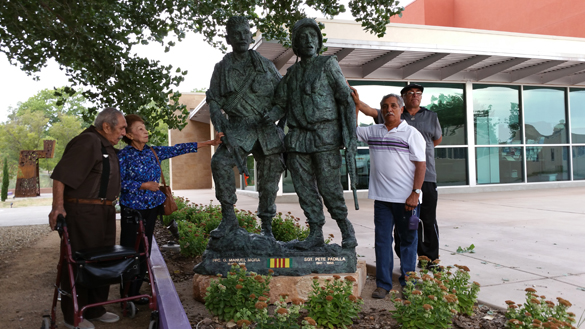