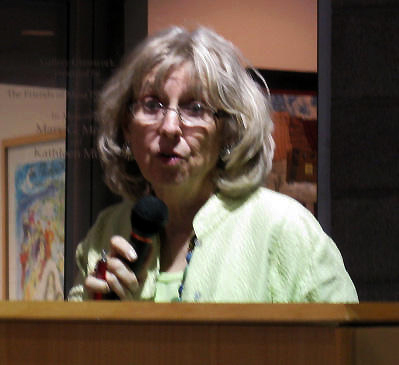 A former senator who served in New Mexico’s legislature from 1997 to 2012, Dede Feldman got an up close view of New Mexico politics.

There were the citizens who worked hard to usher in change to the state and the resistors who pushed against the reform efforts. Feldman listened to the legislators who complained that their constituents had nothing, while other lawmakers came from districts that had more than their fair share of money and resources.

Feldman observed that her colleagues’ fancy boots contrasted highly with citizens whose dusty boot spurs would scratch against the Roundhouse’s marble floor.

She included her experiences, insights and knowledge in her book, “Inside New Mexico Senate: Boots, Suits and Citizens.” Feldman discussed her book during Thursday’s Authors Speak series at Mesa Public Library.

“It was really for the citizens that I wrote this book,” Feldman said. “This book provides a kind of guide for how citizen advocates can be successful. Boots, Suits, and Citizens also reveals, how I learned my way through the maze we call New Mexico Legislature, Feldman said.

Feldman described the Senate as “a crazy, unpredictable place.”

“There didn’t seem to be a method to the madness,” she said.

When she voiced her concerns to more seasoned legislators, their reply was, “don’t worry. It will come out alright in the end.”

Sometimes it didn’t. There would be many bills left on the table by the end of session. Lawmakers would protest lengthy special sessions and chant, “sign or die!” Yet, she pointed out, the legislators are citizens themselves and have their own day jobs.

So how can one successfully pass bills that offer positive change in New Mexico? Knowledge is key, Feldman said. People need to know the process. When a bill goes to committee, it is valuable to map out relationships with the committee members and to argue how it would be advantageous to the legislators to get the bill passed.

Feldman’s career has led to her many places. She has worked as a journalist, a teacher, and even led her students, along with her husband, to a work camp in Uganda. She currently runs a public relations business.