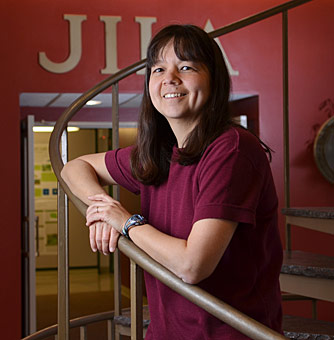 Deborah Jin, a physicist at the National Institute of Standards and Technology (NIST) who works at JILA, has been selected as the North American recipient for the 2013 For Women in Science Awards.

JILA is a joint institute of NIST and the University of Colorado Boulder.

The award is given annually by the L’Oréal Foundation and UNESCO as part of an international program recognizing women in science and supporting scientific vocations.

“These five outstanding women scientists have given the world a better understanding of how nature works,” UNESCO Director-General Irina Bokova said in a news release. “Their pioneering research and discoveries have changed the way we think in various areas of the physical sciences and opened new frontiers in science and technology. Such key developments have the potential to transform our society. Their work, their dedication, serves as an inspiration to us all.”

Jin was cited “for having been the first to cool down molecules so much that she can observe chemical reactions in slow motion, which may help further understanding of molecular processes which are important for medicine or new energy sources.”

“The award is definitely an honor,” Jin says. “Part of that comes from the fact it’s just not a local thing, it’s a worldwide program. It will be fun to meet the award winners from other areas, people that I otherwise might not meet, and hear their perspectives.”

Jin is a NIST/JILA Fellow and is a world leader in advancing understanding of quantum mechanics, the seemingly curious rules that govern the behavior of atoms and smaller particles.

Jin was cited for her work chilling ultracold molecules enough to observe chemical reactions, which may help create practical tools for “designer chemistry” and other applications such as precision measurement.

Jin is a member of the National Academy of Sciences and winner of numerous previous awards, including the 2008 Benjamin Franklin Medal in Physics and a 2003 John D. and Catherine T. MacArthur Fellowship, commonly called a “genius grant.”

Information about the awards program can be found at www.forwomeninsceince.com. This is the second time a NIST-affiliated scientist has won a Women in Science award.