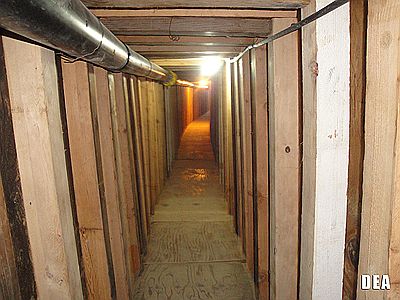 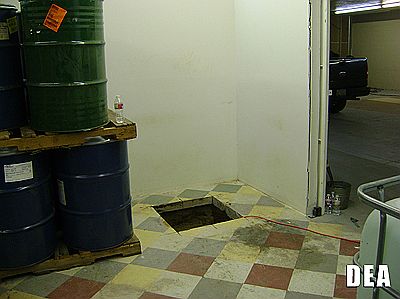 Exterior view of entryway to tunnel found in a storage room inside a business in San Luis, Ariz. Courtesy/DEA
DEA News:

Agents from the U.S. Drug Enforcement Administration (DEA) along with the U.S. Immigration and Customs Enforcement, U.S. Border Patrol, Yuma County Sheriff’s Office and Arizona Department of Public Safety executed a search warrant July 7 at a business used to conceal the U.S. entrance to a tunnel that stretched 240 yards underground to an ice plant across the border in Mexico.

Inside a one-story non-descript building at 508 Archibald St., in San Luis, Ariz., agents discovered the tunnel’s entrance in a storage room hidden beneath a large water tank.

From the floor, the tunnel plunged more than 55 feet into the ground. Its walls stand more than six feet high.

The shaft of the passageway measures 48-inches wide at the San Luis entrance. The tunnel is equipped with lighting and a ventilation system and reinforced with 4 x 6 beams every few feet along with plywood for the walls, ceiling and floor.

When agents entered the San Luis business, it was empty and largely unfurnished. Found on the floor next to the tunnel entrance were numerous 55-gallon drums filled with dirt and soil excavated from the vertical shaft as well as large plywood boxes believed to be used to cover the pallets of drums for later removal from the location.

As DEA agents searched the business, the Mexican Military made entry into the ice plant business across the border in San Luis Rio Colorado, Sonora, where they located the tunnel’s other entrance.

Mexican authorities found numerous bags of dirt stacked to the ceiling in the room where the tunnel’s entryway was located.

“The recent discovery of this sophisticated drug smuggling tunnel is yet another reminder of how desperate these criminal organizations are and the extent they will go to further their drug dealing operations and endanger the security of our citizens,” said Doug Coleman, Special Agent in Charge of the DEA’s Phoenix Field Division. “The DEA continues to work with our counterparts nationally and internationally to bring to justice these drug trafficking organizations as well as to block their smuggling routes into this country.”

Since January, DEA agents began conducting surveillance on the business after observing possible suspicious activity that indicated the site was being used as a potential stash location.

On July 6, agents learned that DPS had stopped a black Ford F-150 pick-up on Highway 95 on a traffic violation.

Inside the bed of the truck, DPS officers discovered 39 pounds of methamphetamine. Information gleaned from the stop led the vehicle back to the business location in San Luis, Az

Based upon the results of the vehicle stop coupled with DEA’s active investigation, agents obtained a search warrant to enter the business location.

So far, three suspects have been taken into custody in connection with the tunnel.

“Homeland Security Investigations stands firmly with our federal, state and local law enforcement partners in our joint effort to disrupt and dismantle drug trafficking organizations and their infrastructures,” said Jay Crede, Assistant Special Agent in Charge of HSI Yuma. “The loss of this tunnel will deal a blow to those traffickers who were attempting to elude detection by taking their contraband underground.”

“I’m proud of the excellent work performed by detectives assigned to the Arizona Department of Public Safety Criminal Investigations Division. Their tenacity really made the difference in uncovering the existence of this tunnel. DPS is dedicated to the mission of dismantling criminal syndicates that profit from the illegal drug trade. This case provides another example as to the lengths drug smugglers will go to get their product into this country. I hope this sends a clear signal that state and local law enforcement will always work together to put these operations out of business,” said Robert Halliday, Director of the Arizona Department of Public Safety.

“The Yuma County Sheriff’s Office has partnered with federal, state and local agencies through the Yuma County Narcotics Task Force which currently shares space with the local DEA Office, said Sheriff Ralph Ogden. The officers assigned to the task force work closely and share information with each other to ensure not only the continuity of the investigations, but also that the investigations are complete, concise and thorough,” said Yuma County Sheriff Ralph Ogden. “This investigation is just another example of the continued level of cooperation between local law enforcement agencies in Yuma County with the common goal of shutting down the cross border smuggling of narcotics into the United States.”

DEA agents are coordinating the ongoing investigation into the tunnel. Law enforcement officials from Mexico are also aiding in the investigation.

The San Luis passageway is the only known completed and fully operational smuggling tunnel ever uncovered in the Yuma, Ariz., area. In the past 10 years, 89 cross-border tunnels have been discovered in Arizona and 50 in California. 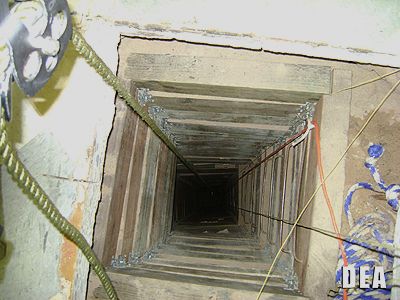 Tunnel entryway on U.S. side of the border. Courtesy/DEA 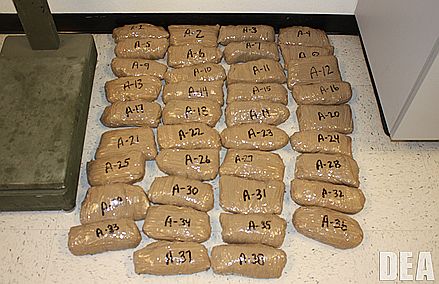 Agents connect 39 pounds of methamphetamine back to a business in which the tunnel entrance was hidden beneath a large water tank. Courtesy/DEA 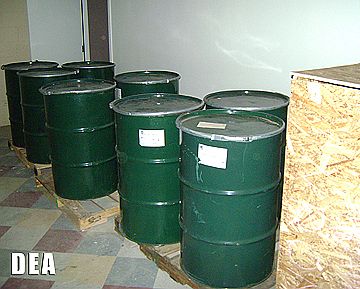