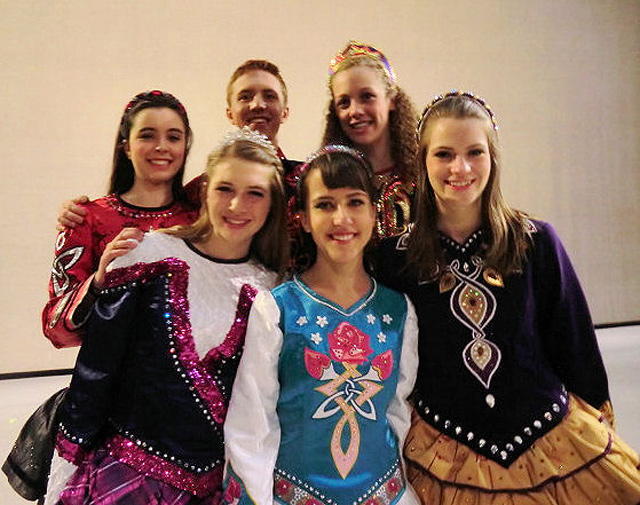 They stole the competition at the CRN North American Irish Dance Championship and dazzled audiences at the Rhythm of Fire St. Patrick’s Day concert at the Lensic Theater.

Now, the dancers and musicians of Belisama Irish Dance Company are showing the community their talents during the Los Alamos Arts Council’s Brown Bag show at noon Wednesday, April 3 at Fuller Lodge.

Those who will take the stage during the free performance include Darcy Turin, Orli Shlachter, Lauren Partin, Maria Jones, Celia Kessler, and some of the younger members of the dance school.

“We’ll do very traditional hardshoe treble jigs and treble reels, a set dance or two (that’s a hardshoe solo dance performed to very slow music so that you can fit a lot of fancy steps in), and some softshoe slip jigs and light jigs,” Heather Jones, event organizer said.

“The dances will be similar to competition dances, some of themto the recorded tunes ‘Snowy Path’ and ‘Gweebarra Bridge,’ and others played by 17-year-old fiddle player Maria Jones. We’ll wear our pretty costumes, most of them made by our extremely talented Los Alamos dance mom Carolyn Bossert,” Jones said.

Belisama Irish Dance Company, under the direction of Adrienne Bellis, includes four National and Open Champions. The Company has performed with Natalie MacMaster, Eileen Ivers, Gaelic Storm, and Lunasa, and most recently with former Riverdance lead and two-time world Champion Michael Patrick Gallagher at a sold-out performance at the Lensic on March 15.

Belisama Irish Dance is a member of Cumann Rince Naisunta (CRN), one of the three major Irish dance organizations in Ireland, Jones said.

“CRN is dedicated tokeeping alive the older, more traditional styles of Irish dance, so our dances tend to be softer and less aggressive than some of the other styles you’ll see around the U.S,” Jones said. “The focus of Irish dance is on intricate footwork danced in perfect time to the music. The hardshoe reels and jigs are very lively, the sound the feet become part of the music. The soft shoe jigs and slip jigs are more gracefuland lyrical.”

“What makes Irish dance so special is that it is danced to Irish music,” Jones said. “Ireland has some of the most beautiful and exciting music in the world, and it’s just impossible to listen to it and not wish you were dancing.”

Scottish County Dancers will also be on stage with Belisama on April 3. Scottish Country Dancing is the social and ballroom dance of Scotland, enjoyed by many people worldwide.

Although reaching its present basic form in 18th century Scotland, it has continued to evolve and spread in popularity through the centuries.

Scottish Country Dances include jigs and reels (in quick time), strathspeys (in slow time) and medleys of both quick and slow time. The strathspey music and dance is unique to Scotland, having originated in the Spey valley south of Inverness.