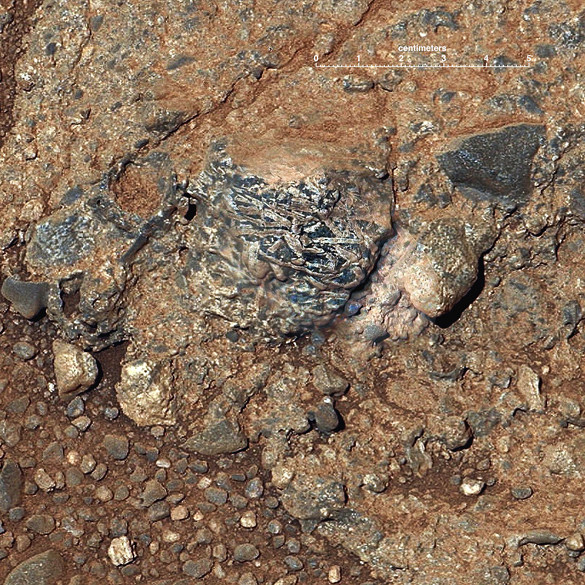 The ChemCam laser instrument on NASA’s Curiosity rover has turned its beam onto some unusually light-colored rocks on Mars, and the results are surprisingly similar to Earth’s granitic continental crust rocks.

This is the first discovery of a potential “continental crust” on Mars.

“Along the rover’s path we have seen some beautiful rocks with large, bright crystals, quite unexpected on Mars” said Roger Wiens of Los Alamos National Laboratory, lead scientist on the ChemCam instrument. “As a general rule, light-colored crystals are lower density, and these are abundant in igneous rocks that make up the Earth’s continents.”

Mars has been viewed as an almost entirely basaltic planet, with igneous rocks that are dark and relatively dense, similar to those forming the Earth’s oceanic crust, Wiens noted. However, Gale crater, where the Curiosity rover landed, contains fragments of very ancient igneous rocks (around 4 billion years old) that are distinctly light in color, which were analyzed by the ChemCam instrument.

French and U.S. scientists observed images and chemical results of 22 of these rock fragments. They determined that these pale rocks are rich in feldspar, possibly with some quartz, and they are unexpectedly similar to Earth’s granitic continental crust. According to the paper’s first author, Violaine Sautter, these primitive Martian crustal components bear a strong resemblance to a terrestrial rock type known to geologists as TTG (Tonalite-Trondhjemite-Granodiorite), rocks that predominated in the terrestrial continental crust in the Archean era (more than 2.5 billion years ago).

The results were published this week in Nature Geoscience, “In situ evidence for continental crust on early Mars.”

Gale crater, excavated about 3.6 billion years ago into rocks of greater age, provided a window into the Red Planet’s primitive crust. The crater walls provided a natural geological cut-away view 1-2 miles down into the crust. Access to some of these rocks, strewn along the rover’s path, provided critical information that could not be observed by other means, such as by orbiting satellites.