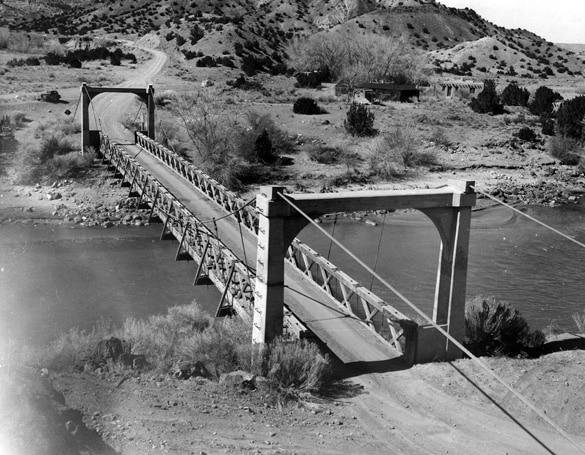 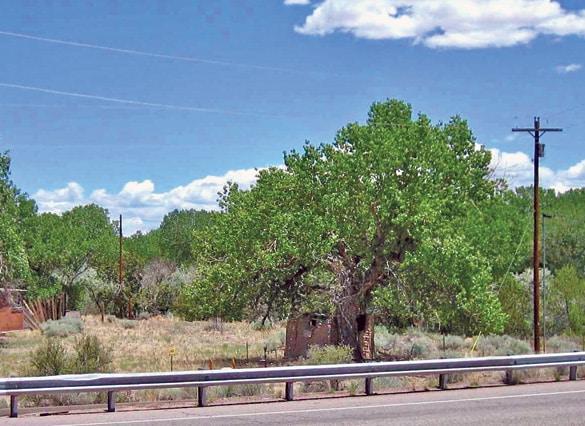 Many cars pass over the Rio Grande at the Otowi Crossing each day. The drive has most likely become routine for more than a few of the drivers who are on their way to the Lab in the morning or on the way home from work in the evening.

They pay little notice to the old bridge to the south of the modern highway and probably even less to a small adobe structure, a well house, just to the north of the road where it stands beneath a dying cottonwood tree.

In my case, I have always noticed that well house and the suspension bridge because I have long been fascinated by the history of the place and the people who were key figures in the events that took place there.

The site became known as a “crossing” in 1887 when the Denver and Rio Grande narrow-gauge railroad, known locally as the Chili Line, extended its route from Española to Santa Fe by crossing the river on a wooden trestle.

In the early days, the place was called Haynie, and the D&RG (in later years the D&RGW) passed through three times a week.

In 1917, Los Alamos Ranch School founder Ashley Pond sought an agreement with the railroad to establish a stop north of the trestle so that goods for the school could be unloaded and stored in a boxcar beside the tracks. By then, the station was called Otowi, and a retired lumberjack named Shorty Pelaez was living there in a two-room frame house rented from Julian and Maria Martinez, destined to become the famed potters of San Ildefonso. Shorty was paid to guard the freight until someone from the ranch school could collect it.

He added a gas pump and turned his front room into a store to supplement income. That arrangement worked well until Shorty disappeared rather suddenly one night in 1922. There were rumors that bootlegging might have been involved in his sudden decision to leave.

Otowi Bridge was built in 1924, and two rooms were added to the wood frame house. Adam Martinez, son of Maria and Julian, lived there to guard the freight until someone else could be found to do the job.

The “someone else” was Edith Warner, a 35-year-old easterner who had come to New Mexico for her health, fallen in love with the land and culture, and wanted to stay. She moved to Otowi in 1928 and began settling in.

During the early days there, Edith needed help with heavier tasks, so Atilano Montoya came from the pueblo.

A former governor of San Ildefonso and known to everyone as Tilano, he worked at Otowi so often in the first months that Edith suggested that he just stay there. After making Edith’s home comfortable, he built a guest cottage nearby, where he lived when it was unoccupied.

To supplement the small amount of money she earned each month from the Ranch School, Edith ran a tearoom in her home and sold gas, sodas, tobacco, and a few other goods.

When World War II began and gas was rationed, fewer cars passed, which meant fewer customers. Her income dwindled, and she didn’t see how she could stay at Otowi. However, a car stopped one day with a visitor who made it possible.

Robert Oppenheimer had met Edith on pack trips into the Jemez in years past and knew of her hospitality, having shared dinner in her home.
He had come to ask if she might serve dinners to the scientists working on the Hill, giving them an evening away from the pressure of their work.

At $2 a plate, she and Tilano, who worked as the server, earned enough to remain at Otowi throughout the war.

How strange is fate that men of such stature—Fermi, Teller, Parsons, Bohr, among them—would sit down to dinner in Edith’s home, an obscure little wooden house on a dirt road?

These are the memories I have when driving past that well house, the last of the original structures from Edith’s time there. A few months ago, the roof collapsed. Only partial walls remain now to tell the remarkable story of a place and time and the people who made it special.