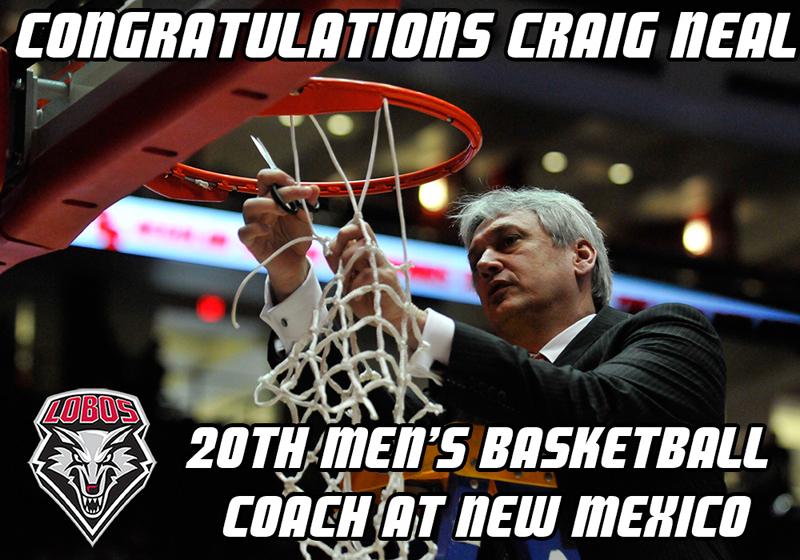 Neal is entering his sixth season at New Mexico and was named the Lobos’ Associate Head Coach March 27, 2007.

He accepted the top job offer today with gratitude as he choked back tears during a press conference in Albuquerque.

Prior to coming to UNM, Neal, 48, spent three seasons working for Alford at the University of Iowa. Prior to Iowa, Neal spent eight seasons with the NBA’s Toronto Raptors from 1996-2004. He joined the Iowa staff in August of 2004.

With New Mexico, Neal has been actively involved in all facets of the program, from on-the-floor coaching to all of the behind-the-scenes work for a major college basketball program.

Neal is considered one of the finest tactical coaches in the nation, as his diverse background in the collegiate and professional ranks has afforded him a chance to learn and coach on many stages.

Neal has been heavily involved in the UNM offensive setup, and he is well respected nationally for his recruiting ability, game strategy, and knowledge of the game.

The Lobos have flourished with Neal in the associate head coach role, winning 126 games over the past five seasons, the most successful five year period in school history. Neal, who handled the offense for the Lobos, has helped New Mexico consistently finish at the top of the conference in most offensive statistics.

UNM has also finished in the top four in assists in all five years, and in the top three in assist-turnover ratio as well.

With New Mexico, Neal has been a part of the two winningest teams in school history, as the 2009-10 team won a school record 30 games, and the 2011-12 team tied for the second-most wins in school history with 28.

Iowa posted a 63-35 record while Neal was on staff, including consecutive trips to the NCAA Tournament. The Hawkeyes won 25 games in 2005-06, the second highest total in school history. They also captured the Big Ten Conference tournament title, set a school record with 10 wins over top 25 opponents and ran off a school-record 18-game winning streak in Carver-Hawkeye Arena, winning all 17 home games in 2005-06. Neal was instrumental in Iowa’s recruiting efforts. More than one publication ranked the 2006-07 class as one of the top 10 catches in the nation.

Neal was a scout in North America and Europe for one year before joining the Iowa staff, scouting high school, junior college, college and European players for the NBA Draft and for trade possibilities. He was also involved with development of current roster players, recruiting of free agents and selecting players for summer league and training camps.

As an assistant coach from 2000-03, Neal was involved with practice preparation, advance scouting, and the preparation and implementation of opponent scouting reports. He managed and directed Toronto’s player development program, both during the season and the summer. Neal coached Toronto’s summer league team for three years and was the lead coach in directing all Raptor college pre-draft workouts. His duties also included assisting with the operations budget, working with advance scouting team and coordinating schedules for Toronto scouts.

Neal was a two-year starter at Georgia Tech in the mid-1980s. He earned all-Atlantic Coast Conference honors as a senior in 1988 when he set the ACC single-season record with 303 assists. Neal’s playing career at Tech spanned five seasons, as he was limited to just four games in 1984-85 due to injury. He averaged 7.7 points as a senior. Neal averaged a league-best 9.5 assists per game (11.6 in conference games) that season, which still stands as a single-season record at Georgia Tech. His 659 career assists was a school record at the time and now ranks third best at Tech. Neal’s 5.2 career assist average is fourth best at Tech and his 127 career steals is the 11th best total at the school.

Neal was a member of five Yellow Jacket teams that advanced to postseason play, including an NIT appearance in 1984 and NCAA Tournament berths the following four years. Tech advanced to the regional final in 1985 before losing to top-seed Georgetown, and the Sweet Sixteen in 1986.

After a first round loss in 1987, Georgia Tech defeated Iowa State in 1988 before falling to Richmond in the second round. Neal earned his bachelor’s degree in management from Georgia Tech in 1988.

The native of Washington, Ind., played prep basketball at Washington High School, for his father, Stan. Craig earned all-America recognition and was a member of the Indiana All-Star team following his senior year in 1983.

Neal played eight professional seasons in the NBA, CBA and Europe, beginning in Portland where he was a third-round draft pick of the Blazers in 1988. He also played in Miami and Denver in the NBA and played in three championship series while competing in the CBA. Neal served as a player and coach in his final season in the CBA (1994-95) before joining the Toronto organization. He was involved in professional basketball for 16 years.

Neal was involved with the NBA’s Team Up community service program in Toronto. He founded the Craig Neal/Grant Delagrange benefit golf tournament in Fort Wayne, Ind., with proceeds dedicated to schools for autistic and Down Syndrome children.