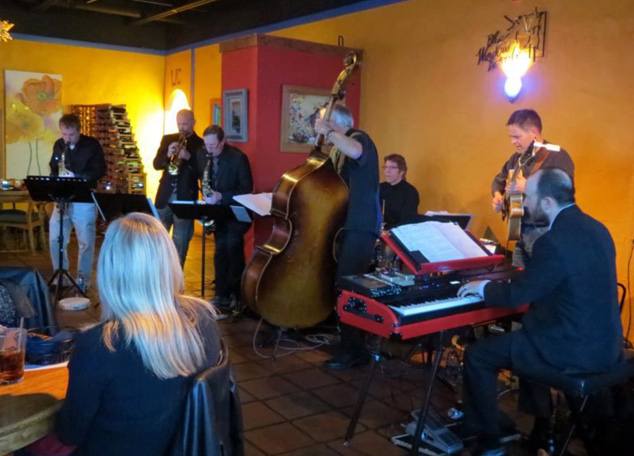 Tickets are $15 per person and dinner reservations are required.

This is the band’s third appearance at the restaurant and they will break out plenty of new tunes for the audience.

“I call this set list ‘Raisin’ the Bar.’ One cool aspect of being a band that’s been together over a year is we are continually challenging ourselves with more difficult tunes,” band leader Craig Martin said.

Martin explained that about half the tunes are composed or arranged by band members.

“Guitarist Mike Rogers wrote a great bop tune for us that he calls “Boptism,” and trumpeter Carl Hagelberg’s cool harmonies will be heard in several tunes including the 1930 classic “Close Your Eyes”—but don’t expect anything like the Doris Day version,” Martin said.

Joining Martin and Hagelberg on the horn line is saxophonist Quinn Marksteiner. His stylish improvisations are always crowd—and band member—favorites.

CME’s repertoire is an eclectic mix of about 50 tunes from the 1930s to the present. It’s a mix of old-fashioned swing from the thirties and forties, classic hard bop from the fifties and sixties, funky jazz from the seventies and eighties, and a smattering of salsa-influenced Latin tunes from the present.

“We like to play a mix of songs that the audience is familiar with, and tunes that are so swinging that they are accessible to everyone,” Martin said.