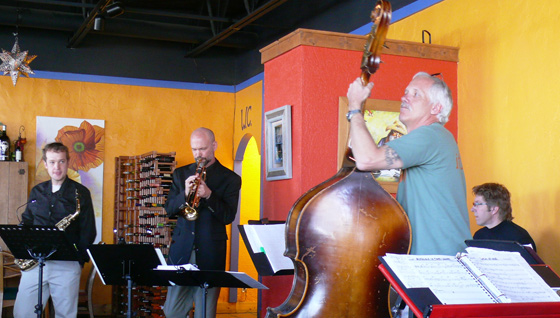 “We’re going to celebrate the official arrival of summer with a selection of cool jazz on a warm evening,” band leader Craig Martin said. “Not that there won’t be some hot tunes, too.”

This is the band’s fourth appearance at the Blue Window. Martin said that the band loves performing in the restaurant’s intimate setting and playing for the local crowd. The  audience always loves the different blend of three horns that give the ensemble its characteristic sound, he said.

The band will present a mix of standards and tunes written or arranged by band members.

“Guitarist Mike Rogers contributes two originals, a great bop tune he calls ‘Boptism,’ and an Ellington-styled song he wrote during a trip to a local hardware store called ‘Right Tools for the Job,’” Martin said.

Trumpeter Carl Hagelberg’s tune ‘Bluezes’ will be part of the set, and his cool harmonies will be heard in several tunes including the 1930 classic “Close Your Eyes.”

Joining Martin and Hagelberg on the horn line is saxophonist Quinn Marksteiner. His stylish improvisations are always crowd—and band member—favorites.

“Although the focus is often on the horn line, it’s the rhythm section that drives the band. Mike’s guitar work is skillfully complemented by Aaron Anderson’s keyboard, and drummer John Frary and bassist Rob Heineman keep the groove steady and always interesting,” Martin said.

CME’s repertoire is an eclectic mix of about 70 tunes from the 1930s to the present. It’s a mix of old-fashioned swing from the thirties and forties, classic hard bop from the fifties and sixties, funky jazz from the seventies and eighties, and a smattering of salsa-influenced Latin tunes from the present.

“We like to play a mix of songs that the audience is familiar with, and tunes that are so swinging that they are accessible to everyone,” Martin said.

The ensemble will perform 7-9 p.m. The regular dinner menu will be offered 5-9 p.m. Tickets are $15 per person and dinner reservations are required.