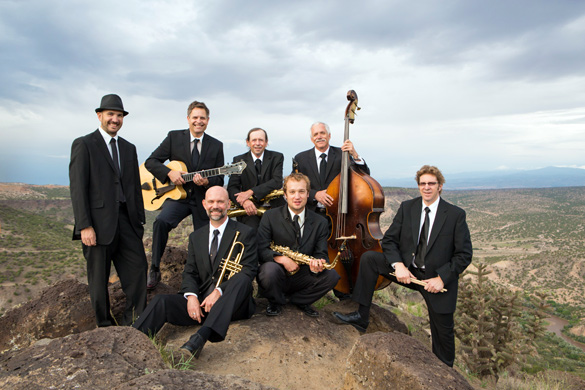 In a concert at the Ashley Pond Pavilion Tuesday, June 17 the Craig Martin Experience (CME) will perform two hours of jazz with a modern focus.

“Over the last 50 years what we call jazz has borrowed rhythms from the pop charts and incorporated soul, funk, Latin and rock beats,” band leader Craig Martin said.

That’s what the group will bring to the new venue at the Pond.

“A warm summer evening, outdoors, the Jemez sunset ─ we thought we’d play a couple of high-energy sets that we hope will get everybody dancing,” Martin said.

The group will present their free concert 7-9 p.m. as part of the Los Alamos Creative District’s Tuesday night concert series at Ashley Pond.

CME will perform some Horace Silver tunes that are considered classics of Soul Jazz. In the mid-1960s, Silver listened to the Motown Sound and brought that easy groove to his jazz compositions like Serenade to a Soul Sister, Martin explained. Silver also found ways to use Latin rhythms in songs like Mary Lou. Kenny Dorham combined both in his Una Mas, a tune best described as Latin Funk.

“Proving that any groove can be used in jazz, our trumpeter, Carl Hagelberg, brought a bit of hip-hop to CME in his arrangement of the 1930s tune Close Your Eyes,” Martin said.

The best-selling “jazz” songs of all time all came with a driving, rock-oriented beat, he said.

“Like most everyone under the age 65, the band grew up rock and roll, and so we love to play compositions that fuse rock and jazz,” Martin said.

With a diverse set list like this, Martin hopes music lovers will come out and watch the rhythm section work up a sweat!