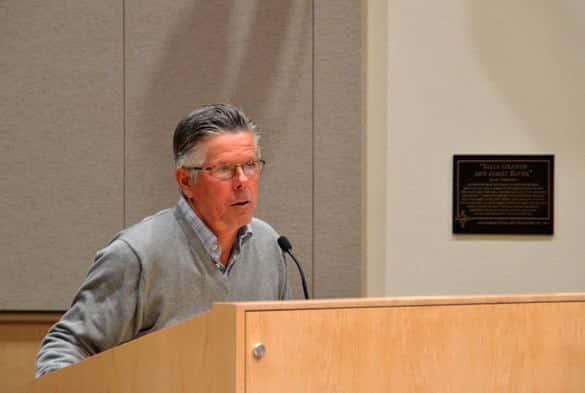 Former Los Alamos Police Chief Wayne Torpy pleads with County Councilors for help with his insurance benefits issues during a meeting in May 2017 in Council Chambers. Photo by Carol A. Clark/ladailypost.com
By MAIRE O’NEILL
Los Alamos Daily Post
maire@ladailypost.com

Torpy initially filed suit in February 2015 against the Los Alamos County Council and a year later, filed an amended complaint that also listed Union Security Insurance Company (USIC), also known as Assurant Employee Benefits. USIC maintained that the terms of its policy were that long-term disability benefits would be offset by disability benefits from a government plan or retirement benefits from a government plan.

Judge Mathew’s June 11 ruling states that the insurance company “properly and timely determined Torpy was never eligible for long-term disability benefits under the Los Alamos County group policy. Judge Mathew ordered that almost $67,000 paid to Torpy under the County policy be repaid with $500 to be paid within 20 days and the balance to be paid from his probate estate upon his death.

Torpy addressed the County Council May 16, 2017 and said in November 2012 he was stricken by a very serious illness when he contracted an infection in his heart that broke apart and caused a brain aneurism and a stroke. In 2013, he said his doctors told him he needed to retire, seven years earlier than he planned.

Torpy told the Council that because the County doesn’t participate in social security it offers long-term disability insurance. He said he happened to get caught in a quagmire, that the County procured new insurance and that insurance changed carriers in January 2013.

Torpy said when he approached the County’s Human Resource Department they didn’t know which insurance policy would cover him so they directed him and assisted him in filing with both insurance companies. He said within days he received checks from both companies for his disability. He said he knew he couldn’t keep both checks so he want back to the County and told them something was wrong and one company continued to pay him.

A little over a year later, the company which was paying stopped. He said when he applied for his insurance they knew he had insurance from working for 25 years in Florida. After a year, he said the company declared they could offset that money from his insurance payments.

Torpy told the Council he hired lawyers and spent a lot of money. He said at the end of March 2017, a federal judge in Florida ruled that the insurance company should have paid him and ordered the company to pay him his back pay, his future, interest and attorneys fees. He said the insurance company appealed the decision and he had to hire another attorney to fight the appeal case for him.

Torpy presented Council members with the federal court opinion and other documents and pleaded with them to review them and do the right thing. He asked who bought the insurance, who procured it and who should have known and understood it. He suggested Council read the employee benefits package that states 60 percent of lost income is paid. Torpy’s remarks were made under public comment on the Council agenda and there was no response to his presentation.