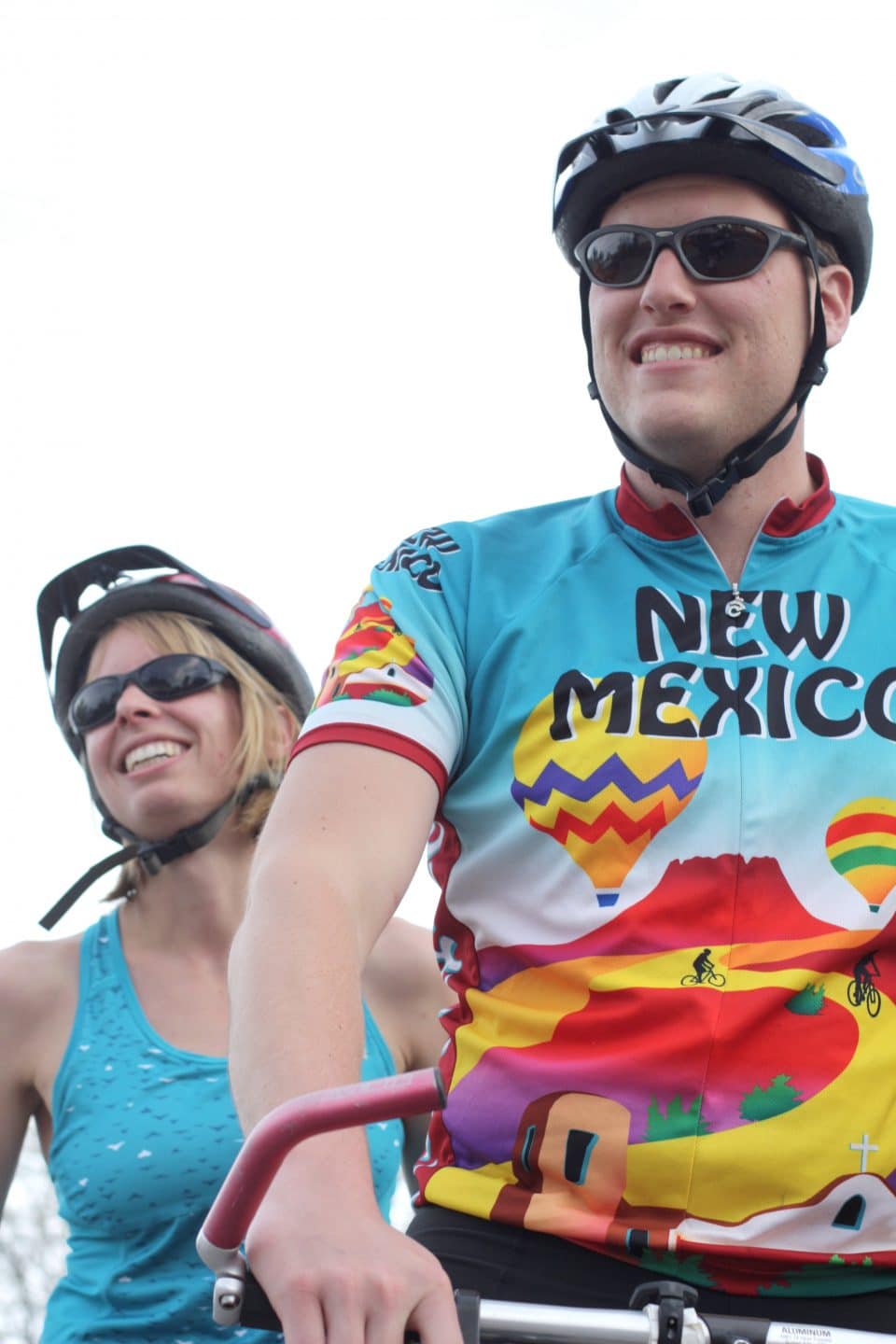 Leanne and David Smith on a cross country bicycle trip from Maine to Oregon. Courtesy photo

Great ideas are conjured up every day. Take Los Alamos residents Leanne Smith and her husband, David, who came up with a plan to bike from Portland, Maine to Portland, Ore. for charity.

As of Sunday, the two were pedaling on their tandem bicycle through Wisconsin. Their journey began Aug. 2 and is expected to cover 3,000 miles in eight weeks.

The Smiths are raising money to repair a broken well in a community in Nicaragua. They invite people to sponsor one mile of their journey for $1. The proceeds go to Living Water International, a Christian non-profit organization that strives to give clean, drinkable water to communities in need throughout the world. The goal is $3,000 and so far the Smiths have raised $1,630. 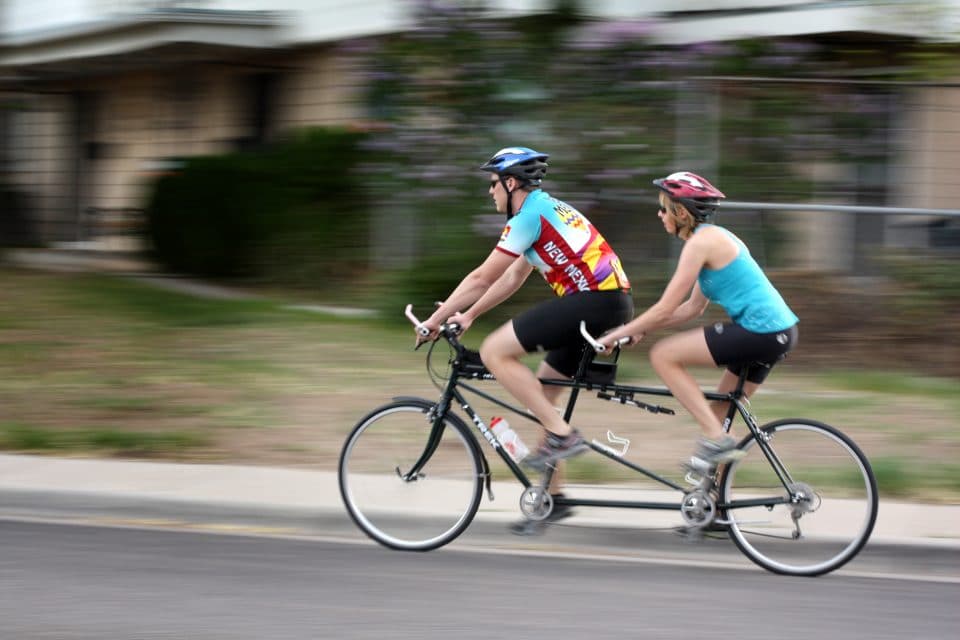 Leanne and David Smith are logging 65 miles per day on their tandem bicycle. Courtesy photo

People have been invited along for the Smiths’ cross-country bike ride in other ways as well. Leanne has chronicled their trek through her blog, It Takes Two to Tandem.

She posts about the challenge of packing a tandem bike on their plane ride to Maine, the rainstorms they’ve endured, a Wisconsin biker bar, a flea-bag motel room, the joy of a campground shower and all the good food they have eaten along the way.

Leanne explained that this trip was plotted out years ago.

“My husband, David, has always been more of a biker than I am. He biked to class most days in college and has continued to commute by riding his bike to work when the weather permits,” she said. “I have been a runner since elementary school, so transitioning into riding wasn’t the easiest for me (all sorts of new muscles and techniques.) After we graduated from college (but before David took a job at Merrick in Los Alamos), David mentioned to me that he’d like to bike across the country someday. I agreed that it would be fun, and easier to do sooner in life than later, so we began making plans.”

One of Leanne’s conditions for going on the trip was to not be left in her husband’s dust all the time as he is the much stronger biker.

“It was his idea to use a tandem to remedy that problem,” she said. “We bought one to try out and although we were a bit wobbly at first, we definitely came to love it.”

To get ready for the cross-country bike ride, Leanne said they began indoor bike training in January and started going on rides in White Rock in early spring.

The couple participated in the 100-mile Santa Fe Century and Leanne took part in a week-long fitness boot camp with Rita Brake, who runs Renew Fitness. Leanne and her husband also took overnight trips to Bandelier National Monument throughout the summer.

“Our biggest test was a two-day trip from Pagosa Springs to Lake City, Colo. It was 110 miles with two crossings of the continental divide,” Leanne said. “Since January, we’ve clocked about 900 miles each of training. One thing we’re counting on, however, is that on a two-month bike trip, we’ll get in shape sooner or later.”

The Smiths are originally from Seattle, so they decided to ride from Portland, Maine to Portland, Ore. in order to bike toward friends, family and familiar ground.

“They have a number of routes across the country, but their Northern Tier route matched up pretty closely to our original Portland idea,” she said.

With the journey half-way completed, Leanne said she has enjoyed sharing it with others.

“The blog was created because all of our friends and family have been very interested in our trip, and we had a number of requests that we blog as we go so that our parents know we’re safe and so people can be a part of our experiences. So many people have told us how they’ve always wanted to do something like this,” she said. “We also wanted to provide follow up for people who sponsored miles for our charity, so they know just what they paid for. We enjoy blogging about our unique experiences, especially meeting interesting people and seeing and doing unusual things – things that most of our followers might not experience every day. Some of our favorites have been camping with strangers, making pancakes on the beach, picking blueberries, the kindness of strangers, and eating all the time.”

Leanne said she and David decided to contribute to Living Water International because, “We believe that God has called each of us to love one another and serve each other, so it didn’t take long for us to come up with a way for our crazy idea to benefit others. We chose Living Water because access to clean water is so invaluable to us on this trip, and we know we are very fortunate to have that privilege.”

Any decision to act on an idea can come with challenges. Leanne mentioned one obstacle for her and David is homesickness.

“One surprising challenge for us has been recent moments of homesickness, which we have never experienced before,” she said. “We miss our friends and church family and we miss my sister, Deziree, and our amazing dog Latah.”

Leanne said to deal with another challenge, which is to make it to Portland, Ore. on time, the original objective to bike more than 80 miles each day was modified.

“We kept that up for almost two weeks but we were making ourselves miserable with getting up early, pushing hard each day, and not being able to enjoy the sights along the way,” Leanne said. “And so we have decided to eliminate about two weeks of biking and 800 miles by hopping on a train in Fargo, N.D. and riding to Havre, Mont. We are already enjoying our new pace of 65 miles so much more. And we’re proud to still be on schedule to finish 3,000 miles on Sept. 27.”

Besides whatever obstacles are met while bringing a great idea to fruition, it helps to have beautiful scenery, good food, and a traveling companion to take part in the experience.

“The rewards we are looking forward to include a simplified life of cycling, eating and camping, seeing firsthand the beauty, resources and wonderful people of our great nation, and of course bragging rights,” Leanne said. “Also, it’s pretty fun to be exercising so much each day that we get to eat everything we want. We love the adventure and I love to challenge us with new goals for each day … there is also the added benefit of getting to spend time together and strengthening our marriage.”