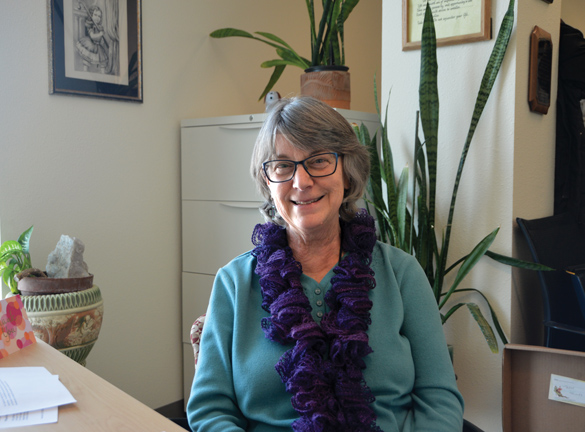 Charlie Kalogeros-Chattan retires Jan. 13 after working 15 years for Los Alamos County. She began as library manager in 2001 in charge of Mesa Public Library and the White Rock Branch Library. She was promoted in 2011 to acting director of the Community Services Department for a year before being appointed to the position in June 2012.

“I am happy and sad all at the same time … retiring is so bittersweet … I am really going to miss all of the wonderful people that I work with at the County, and I’m going to miss this community,” Kalogeros-Chattan said during an interview Tuesday afternoon in her office on the 3rd floor of the County Municipal Building.

Kalogeros-Chattan was born in Manchester, NH; the younger of two daughters.

She met her future husband Jim, who is British, in 1993 while she was vacationing in Turks and Caicos Islands.  In 1997 she moved to England for a year, where they ran a pub together.

“Then he came to the U.S. in 1998 to marry me and that’s when we discovered Taos while on our honeymoon,” Kalogeros-Chattan said. “It had the first good coffee since Boston … it’s one of those ‘I became enchanted with the Land of Enchantment’ situations.”

The couple bought a home off the grid north of Taos in 2000.

“My plans in retirement are rooted in the environment around me at our house on Carson Mesa, and if and when I make more specific plans, I want them to come from that place,” she said. “The stars out at our home are phenomenal. You can see the arm of the Milky Way, the constellations, the moon rising and setting is compelling and the sunsets and sunrises are breathtaking.  Over New Year’s weekend we saw a herd of elk each of the three days, nurturing their young while teaching them to avoid the coyotes. It’s all just amazing to watch.”

Kalogeros-Chattan said that the last five years working with County Manager Harry Burgess “have been incredible.”

“He’s got everyone rowing in the same direction,” she said. “The senior managers who ‘sit at the table’ are outstanding people and I feel I can go to anyone of them for anything that I need. Sitting in a room together each week to discuss the issues is a great way to manage the county and good for taxpayers. Harry is really good at drawing out the best from each of us.”

Kalogeros-Chattan said another thing she really loves about working for the County is the community itself.

“The intelligent, highly engaged people here are so committed to being involved in the government, boards and commissions … I will miss them,” she said. “I also will miss the people I work with in my department. They are an exceptional group of people … They do all the hard work and I do everything I can to help them … I consider my job to be removing obstacles so they can do their best work.”

Along with living off the grid and enjoying the nature around her, Kalogeros-Chattan said she also is looking forward to the time she will have for other pursuits.

“I’m a poet, and have published poetry, but I’ve never had enough time to focus on that… it’s been an add-on to my career and I want to now make it more of a central feature in terms of how I spend my time,” she said.

Kalogeros-Chattan’s replacement is Brian Brogan from Morenci, Ariz. He begins his job at the County Jan. 17.