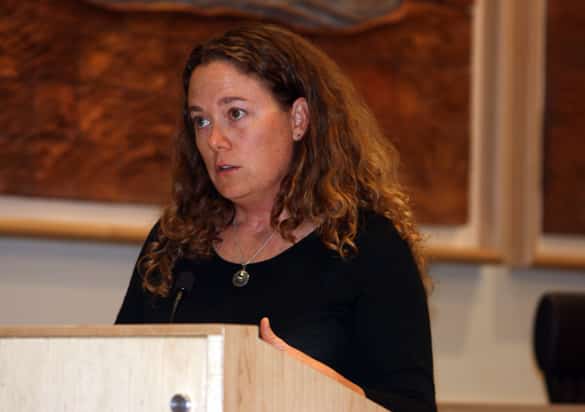 The good news about Los Alamos County’s water supply is there is a lot of it. However, the County still needs a plan to consider a number of factors such as climate change, potential risks to the water such as hexavalent chromium and future water demand.

Amy Ewing of Daniel B. Stephens and Associate, Inc., presented an update on the County’s Long-Range Water Supply Plan to the public Monday night in council chambers.

According to Ewing’s presentation, the Long-Range Water Plan was adopted in 2006 and the version presented Monday was an update to that plan.

The objectives of the plan, she said are to:

Currently there are 12 wells that draw on the regional aquifer beneath the Pajarito Plateau. Two new applications were filed in 2016; one application was for an additional point of diversion for a new well and the second one was to change an existing water right. The County and the Department of Energy jointly filed the application to change the water right in support of the work regarding the chromium plume.

Ewing did point out that more water is being drawn out than what is being replenished; however, “because there is so much in the aquifer those rates of reduction are not alarming,” she said.

The good news continued as Ewing reported that all the monitoring conducted by the Department of Public Utilities (DPU) as well as by Los Alamos National Laboratory showed that Los Alamos’ drinking water is in compliance with all federal and state drinking water standards.

Regarding recent developments with the chromium plume, DPU Deputy Manager James Alarid assured members of the public that Los Alamos’ drinking water is safe. “It (hexavalent chromium)  exists but it doesn’t exist in our drinking water,” he said.

When asked about how DPU would respond if the chromium plume became a problem, Alarid said DPU would definitely notify the public about the situation and be very open about it. He added any contaminated wells would be shut off.

As an interim measure to greatly slow the migration of the plume, the U.S. Department of Energy is currently extracting water from the center of the plume, treating it on the surface and returning the water back into the aquifer at the edge of the plume through injection wells. Alarid said the laboratory is also working on a biological treatment as a permanent remediation which includes the injection of a glucose product, similar to molasses. He added, “The whole time they are sampling and examining their existing wells.”

The plan outlined other potential risks, including a perchlorate contamination in the groundwater beneath Mortandad Canyon. However, if future detected concentrations remain similar, the levels will not exceed standards. Climate change is also an issue. Ewing pointed out that increasing temperatures, longer and warmer growing seasons, more evaporation and other factors all have an impact on the water supply.

Although single family residential customers consume the lion’s share of the pumped water, Ewing pointed out the laboratory plays a huge role in water demand.

As the county’s largest customer, “what LANL is doing has a huge implication on the water plan,” she said.

The plan, she reported, is to enter into a new lease with DOE for its water rights for use by all customers, including Los Alamos National Laboratory.

There are number of recommendations in the Long-Range Water Plan they include:

Pursue a new lease with DOE for the remaining water rights; renegotiate a water contract with DOE which expires in 2019; work closely with the DOE, LANL and the New Mexico Environmental Department regarding the ongoing monitoring of contaminants; and

update the water demand analysis in a few years to re-evaluate whether and/or when a San Juan Chama Project water supply would be needed.

To view a recording of the meeting, visit http://On our website: https://losalamosnm.us/government/departments/utilities/water_supply/

The recording is also available at: https://www.youtube.com/watch?v=IY6SAg9tQ4o&feature=youtu.be