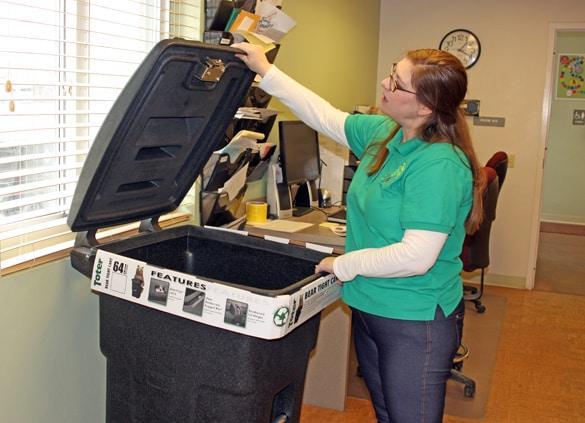 Los Alamos County Environmental Sustainability Division Office Specialist Tiffany Pegoda checks out a bear proof trash cart available to residents later this month. Photo by Kirsten Laskey/ladailypost.com
By KIRSTEN LASKEY
Los Alamos Daily Post
kirsten@ladailypost.com
Bears and trash cans pose a major problem. Animals that frequently dumpster dive for food spell trouble for residents and it can be fatal for bears.
To prevent potential harm to people, property and pets as well as bears, Los Alamos County Environmental Sustainability Division (ESD), in partnership with the New Mexico Game and Fish, is offering bear proof trash roll carts to the community.
The black 64 or 96 gallon bins are equipped with steel rims, double walled lids and locking mechanisms. These heavy duty bins, which were actually tested with grizzlies, can withstand clawing, chewing and are sturdy enough to not fall over. Plus, according to a brochure on the carts, they contain up to 50 percent recycled content and are 100 percent recyclable.
The carts will be available for purchase starting mid April for $77 and come with a three year warranty. Once purchased, the carts belong to the homeowner.
The trash carts are being offered through a federal grant. The New Mexico Game and Fish is covering 65 percent of the cost and the County is contributing 35 percent. The $77 recoups the County’s costs and will allow for more carts to be purchased in the future.
Owners will be provided with information on how to lock and unlock the cart. In fact, the Environmental Sustainability Division offers a tutorial on Youtube: https://www.youtube.com/watch?v=WWSQ1r1aG6E
It is emphasized that the cart must be unlocked on trash collection days otherwise the bin will not be emptied.
ESB Office Specialist Tiffany Pegoda said people can register for the carts online at https://losalamosnm.us/government/departments/public_works/environmental_services_division/services/bear_tough_cart/

There are 300 carts available. The cost will be added to the resident’s utility bill.
Issues with bears started two years, ESD Manager Angelica Gurule said. Los Alamos Medical Center experienced bears digging into its dumpsters and pulling trash out into the canyon. There also was some human/bear interaction in the parking lot. The hospital wanted to reduce risk so it requested bear proof dumpsters.
“Then we started having issues in the neighborhoods,” Gurule said.
She added that ESD asked the state’s Game and Fish Department about bear proof carts.
“The number one thing was we wanted to make sure they were bear resistant,” Gurule said.
Previously, the ESD offered clips for roll carts but the animals could break through them so the clips are no longer offered.
Pegoda said bears go after the easiest food source and Gurule said trash cans give that to them. She explained they love calorie rich food and they can pick up the scent of food from a long distance.
Assistant Chief Bob Osborn of Private Land Programs with Game and Fish agreed; saying the overall objective of the bear proof roll carts is to deter the animals from coming into town and to keep them in the wild.
He said bears coming into the community to scrounge in trash for food has been an ongoing issue for several years. This, Osborn said, is a concern for the County and creates a nuisance.
“It’s a concern for us because anytime you have animals coming into a community, it increases the chances of a human and bear interaction.”
Osborn said trash cans are a tempting target because they are easy to get into and are readily available. He added in the past Game and Fish worked with County to get bear resistant dumpsters, which helps solve the commercial side of the problem, while the bear proof roll carts will help the residential side of the problem.
“These are heavy duty roll carts with a locking lids, which should be be much more bear resistant and help make residential areas more secure,” Osborn said. “It helps with the overall goal to not have bears come into town and stay in the woods. It reduces that problem as much as possible.”
He added he believes Los Alamos is the first community in the state to purchase bear proof trash carts for residences.
“I’ve worked with other communities to get bear resistant dumpsters … that is not new to New Mexico. As far as I know this is first community that is looking for bear resistant roll carts, certainly the first one I’ve worked with to try to get bear resistant roll carts in New Mexico,” Osborn said.
Purchasing a bear proof roll cart is just one option. Others include moving roll carts into a garage, picking up fruit that has fallen from trees, taking down bird feeders and moving pet food inside, Gurule said.
Bear habits are not going to change, Gurule said, so people need to change their behaviors.
“We need to find a way to co-exist with the wildlife,” she said, adding, “If we can change our behavior we’re basically protecting the bears.”
Having the bear proof bins available is a good step toward achieving coexistence, Gurule said. “It’s a step in the right direction. We’ll continue to work on it.”
There has not been any reported bear sightings so far this year but with such a mild winter and lack of moisture there is concern the animals will be venturing back into town. This is why the roll carts are coming at a good time, Gurule said.
Menu
Los Alamos
45°
Fair
7:10am5:24pm MST
Feels like: 39°F
Wind: 9mph SSE
Humidity: 28%
Pressure: 29.93"Hg
UV index: 1
TueWedThu
45/23°F
36/18°F
34/14°F
Weather forecast Los Alamos, New Mexico ▸