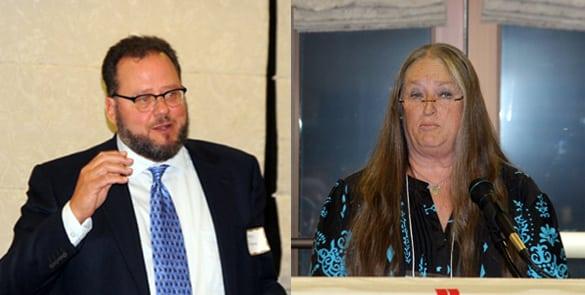 Candidates for Magistrate Judge, James Rickman and Pat Casados, take their turns at the podium during the LWV Forum Oct. 3 at UNM-LA. Photo by Bonnie J. Gordon/ladailypost.com 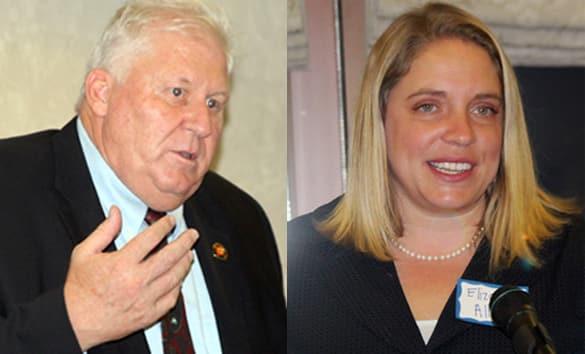 Two sets of judicial candidates appeared before voters at the League of Women Voters Candidate Forum Oct. 3 at UNM-Los Alamos.

Casados has service 16 years as Magistrate in Los Alamos and as a “traveling judge”, assigned to hear cases across New Mexico. During her tenure, she has been awarded a certificate in from the National Judicial College in Reno, Nev., Casados said.  She has served on a number of judicial education committees and served as a trainer and mentor for new judges.

“I have a passion for this job,” Casados said.

Casados said that when it was within her jurisdiction and when appropriate, she would look at drug treatment, mental health treatment, teen court and many other programs to help those appearing before her court to “find another path” as an alternative to incarceration.

“When you come to court, I will treat your case as the most important case before me,” Casados promised.

Rickman, who recently retired from Los Alamos National Laboratory, has lived in Los Alamos more than 40 years, he said. He holds a Bachelor of Philosophy and has 30 years of experience in journalism and science writing. This background, he said, allows him to “listen and connect with people from diverse backgrounds”.

Judges should have the highest integrity, Rickman said, adding that he will strive to make sure crime victims are made whole and people who have committed a crime should be held accountable.

“It’s a waste of a life to spend a long time in jail,” Rickman said.

He would look at options such as military service, job training and education to help former inmates reintegrate into society.

Candidates for Los Alamos Municipal Judge, Democrat Elizabeth K. Allen and incumbent Republican Alan S. Kirk were the next set of candidates at the Forum. The Municipal Court’s jurisdiction includes all municipal and county offenses, including non-felony traffic violations.

Allen pointed to her law background as a major qualification for the post of Municipal Judge. Allen has worked as both prosecutor and defense attorney, and now manages her own law firm and teaches criminal and business law at UNM-LA. She has experience in both civil and criminal law, Allen said. Allen is an active community volunteer in addition to raising her young three children, she said.

“I enjoy serving the people of Los Alamos,” Allen said. “I’m invested in the community.”

Kirk is seeking his sixth four-year term as Municipal Judge. He has lived in Los Alamos for 60 years and served as Los Alamos Police Chief before becoming a judge, he said. In addition to his judicial experience, Kirk pointed to his long record of community service, including taking the lead in establishing the Teen Center and Juvenile Justice Advisory Board. During his tenure he worked to establish Teen Court, the local probation program, the community service program and the pretrial service program that are now in place in Los Alamos, Kirk said.

“I understand the community and have taken a big role in keeping kids out of the criminal justice system,” he said.

When asked about the most important qualities in a judge, Allen said a judge must be above reproach and listen to and treat people with respect. Kirk said judges must set a standard and have a reputation for being fair and impartial.

Both candidates promised to treat DUI cases fairly. Kirk pointed to the lack of treatment facilities available in the County as a problem.

In their closing remarks, both candidates reiterated their credentials. Kirk also stressed his reputation as a fair and impartial judge.

“The court needs new energy and a new perspective,” Allen said in her closing statement.