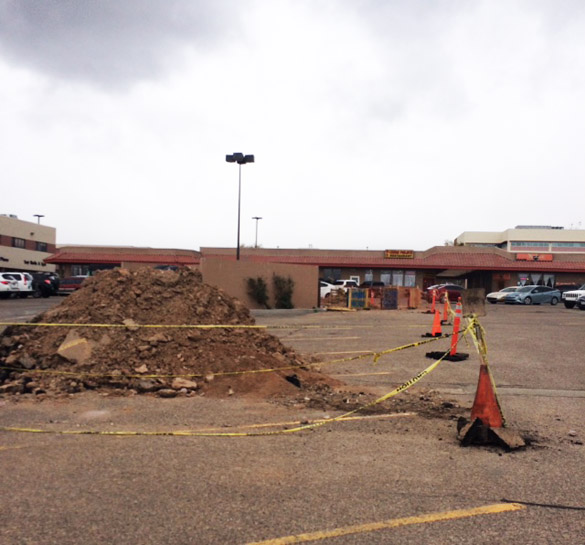 The condition of the Mari-Mac parking lot has caused Los Alamos County to issue a citation to Kroger Real Estate Department. Photo by Maire O’Neill/ladailypost.com 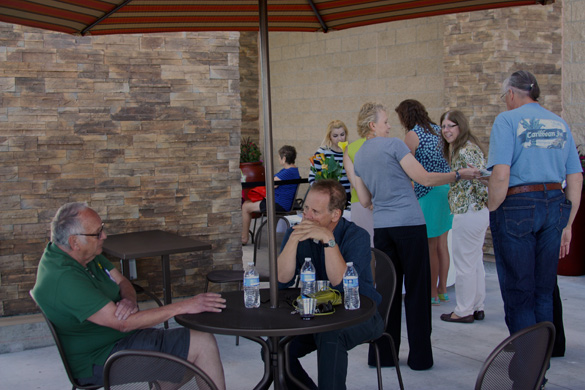 A citation has been filed in Municipal Court by Los Alamos County Code Enforcement Ofc. Larry Valdez against Kroeger Real Estate Department in connection with the condition of the Mari-Mac Shopping Center parking lot.

A notice of violation of Los Alamos County Code Section 18-35 was sent to Kroger but it appears that the issues in question, finishing repairs to the dumpster pad and returning the parking lot surface to “proper surface requirements” prior to April 24, have not been resolved.

An email sent by Gerald Ohlsen of Amethyst Land Co. states that the dumpster enclosure, which was added to the parking lot by Kroeger five or six years ago was unfortunately placed over a section of soil that saturates with water every time there is significant precipitation in the area. Ohlsen said this is because there is a historical clay pipe sewer line (installed by the AEC in the 40’s but abandoned soon thereafter), which is acting as a French Drain that collects water over a wide area, maybe hundreds of acres.

“This means that the ground in this area periodically saturates and dries out and therefore is not a stable base. Accordingly, as you know, the asphalt kept collapsing,” he said.

Ohlsen said a large amount of concrete was dumped in the hole during the initial emergency conditions to try to stop the flow, but this does no good “as water will go where it will go”. He said the old clay pipe is fractured over the entire length they were able to view, and probably throughout, so it cannot contain water just because the end is capped or sealed. He said the surface appears nearly dry now, but the water table is probably only a few inches below the surface (and gradually dropping as nice weather continues).

The bottom line, Ohlsen said in his email, is that he believes the periodically saturated and unsaturated soil conditions have to be lived with, since there is no feasible way to stop the water flow. He said the situation has nothing to do with the County as the historical line pre-dates their existence.

Ohlsen feels the only feasible way to move forward, is to hire a consulting structural engineer to design a slab that is strong enough to form a bridge over an unstable base.

The County’s notice of violation says the County recognizes the efforts to correct the violation and appreciates Kroger’s response.

“Notice of Violation is being issued as a precaution to assure the project is completed within a reasonable time. Three weeks have passed since the initial verbal request occurred,” the notice states.

The citation is the next step in the process and it is expected that Kroger will receive a notice to appear in Municipal Court.