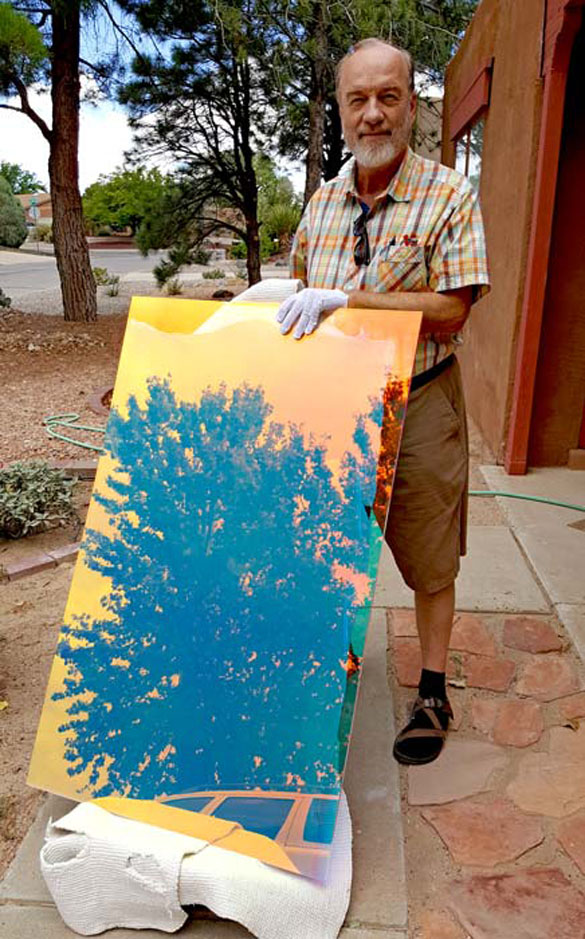 Albuquerque artist Doug Czor carries in one of the Plexiglass panels that is part of his sculpture, ‘Carry the Light’, which is installed at the Los Alamos County Golf Course Community Building. Courtesy/czor.com 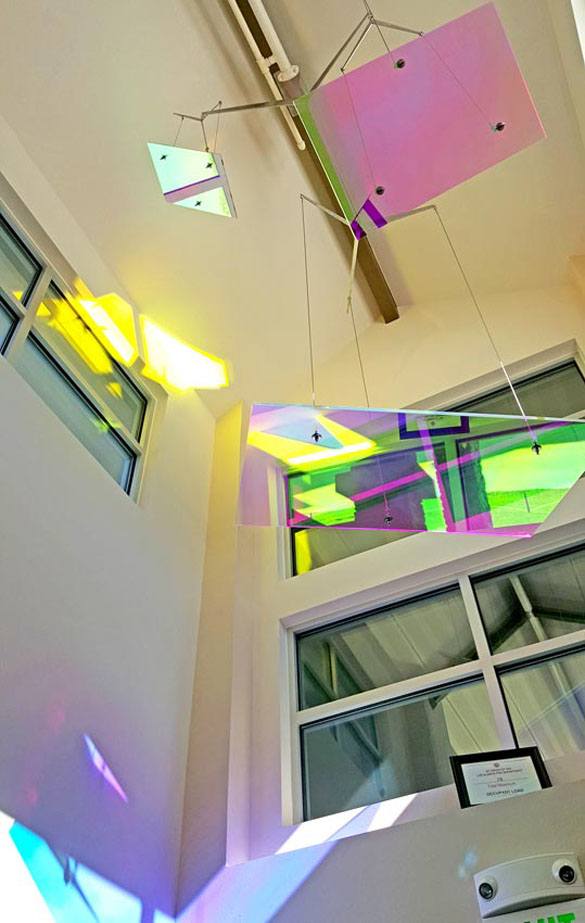 One of the most recent additions to Los Alamos County’s public art collection is Albuquerque artist Doug Czor’s sculpture, “Carry the Light.” Suspended from the ceiling in the Los Alamos County Golf Course Community Building,  the sculpture is constantly changing.

Rectangular pieces of Plexiglas coated in dichroic film are suspended from stainless steel aircraft cables. Depending on where the viewer is standing and which direction the sunlight is coming from, the colors of the Plexiglas panels will change.

Each time “Carry the Light” is viewed, it appears different. There’s an ever-shifting rainbow right above visitors’ heads. The County will hold a dedication ceremony for its new art at 2 p.m. Sept. 7 at the Golf Course Community Building.

Art in Public Places Advisory Board Chair Susan Schillaci said the board commissioned Czor to create the sculpture about 14 months ago. The final installation was completed in July although a plaque with an explanation about the art still needs to be mounted.

Czor said the sculpture in its current form was not what he originally presented. He explained he presented the board with six or seven models that were made from wood and paper but couldn’t get a clear consensus about the board’s opinion of the models.

Eventually, Czor suggested having another meeting and during the drive home, he said the idea for the Plexiglas sculpture popped into his head.

He said it was a flash of intuition and it paid off; the board voted unanimously on the revised model at the next meeting.

“It’s been an interesting process,” Czor said. “I realized  since then … that the idea  really was successful and other ones wouldn’t have been.”

Czor pointed out the color of the sky interacts with the color of the sculpture. Plus, he said he wanted to create something that contrasts with the architecture of the building. True, the rectangular pieces are similar to the geometric design of the clubhouse but the art is separated by its fluid color changes.

Art, science and the magic in these subjects have been a big interest to Czor. “My sculpture career has always been looking at the magic through the sciences of the world.” In fact, several elements of Czor’s work can be found in nature such as the iridescent colorings on butterflies and beetles.

He hopes children looking at the art may get an interest in science or mathematics. “I hope it would be interesting to young people … it might inspire them to look at a career in mathematics or engineering,” Czor said.

Schillaci said the board was first introduced to Czor when he partnered with another artist to submit a proposal for artwork at the Municipal Building. Although their original proposal was not accepted, Czor’s name came up again when the board was looking at art for the Golf Course Community Building.

Schillaci pointed out that “one of the goals of Art in Public Places is to make sure we are diversifying our County collection.” Czor’s work fits the bill. “I think it’s something very different. It’s a great fit for the space because of the light that comes in.”

Czor added the sculpture should stand the test of time and be enjoyed by the public well into the future. “I believe that the sculpture will withstand the life of the building,” he said.