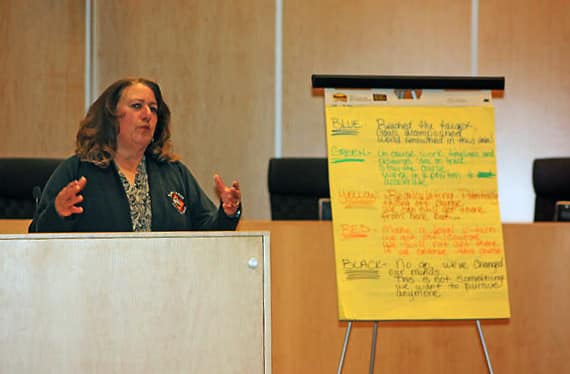 By KIRSTEN LASKEY
Los Alamos Daily Post
kirsten@ladailypost.com
The Los Alamos County Council took stock of progress made on the priorities and goals in the Strategic Leadership Plan during a special meeting Tuesday night in Council Chambers.

Additionally, council members discussed making possible changes to the priorities and goals outlined in the plan. Accreditation Manager and Senior Management Analyst Norma Jean Valdez from the Los Alamos Fire Department led the meeting. She explained the next steps for the Strategic Leadership Plan is to collect all the information given during Tuesday’s meeting and give it to Council to look at it collectively. The Council will then review the identified strategic goals and focus areas and the updated plan will be presented to them at a future meeting for review and to be considered for adoption.

The majority of the priorities and goals, which were evaluated according to a color scale, received passing marks; however, one goal under the Economic Vitality strategic focus area, revitalize and eliminate blight in Los Alamos and White Rock, was debated. Ultimately Council decided to “park” the issue until after the Feb. 13 Council meeting during which the County’s code enforcement program will be discussed.

The revisions to the Strategic Leadership Plan were relatively minor. The plan contains three strategic focus areas: Economic Vitality, Quality of Life and Quality of Governance. Under each of these focus areas areas, there are priority areas.

For instance, under the housing priority area, Council agreed to de-evaluate the goal, promote the creation of a variety of housing options for all segments of the Los Alamos Community, including infill opportunities as appropriate. They also felt the goal, actively pursue land transfer opportunities, which is located under Intergovernmental Relations, is progressing on course, and therefore changed the priority order for 2018.

Additionally, under the Quality Cultural and Recreational Amenities priority area, Council decided to add to the goal, implement a comprehensive range of recreational and cultural amenities that enhance the Los Alamos community. The addition is to maintain and improve existing outdoor recreation and open space amenities.

Furthermore, a goal listed under the priority area, Operational Excellence, which is maintain quality essential services and supporting infrastructure, now includes provisions for the County’s new operating software, PRISM, as well as the County’s permitting process.

In discussing the priority area Communication, Council felt the goal improve transparency in policy setting and implementation needed to be made a priority. In contrast, Council agreed another goal listed under Communication, create a communication process that provides measurable improvement in citizen trust in government, should be kept left but not as a priority focus for 2018.

Regarding the goal, build the local tourism economy, which is listed under the Economic Vitality priority area, Council felt it should be kept but the goal needs to emphasis implementation of the different plans involved in building local tourism: the branding initiative, the wayfinding plan and the tourism strategic plan.

The major issue of the night was the goal concerning blight in Los Alamos and White Rock. The discussion on the goal touched on the County’s code enforcement program.

Councilor Pete Sheehey pointed out that the County seems to be utilizing a carrot and stick philosophy when it comes to code enforcement. The carrot, or incentives, include the Home Renewal Program and the Homebuyer Assistance Program. In regards to the goal, Sheehey said he felt perhaps more language should be added so the goal would be: “Revitalize and eliminate blight in Los Alamos and White Rock with due respect ot homeowner’s rights and concerns.”

Councilor Susan O’Leary wondered if the goal should focus more on commercial blight rather than residential. She also mentioned there was a way to resolve the controversy regarding the code enforcement program and the goal. “I think there is something really easy to implement (and) it is easy to think through the system we have now that is going to benefit the majority of people who have issues,” she said.

Council Vice Chair Christine Chandler said, “It’s a balancing act to get it right and many communities struggle with this particular issue…” She suggested there might be ways to soften approach to code enforcement but didn’t think it was a complete failure. “I don’t want to abandon it,” Chandler said.

One way to soften the program, Councilor Antonio Maggiore suggested, was to remove the word “blight” from the goal. “It connotates that is something a bit more negative than what we are facing and dealing with,” he said.