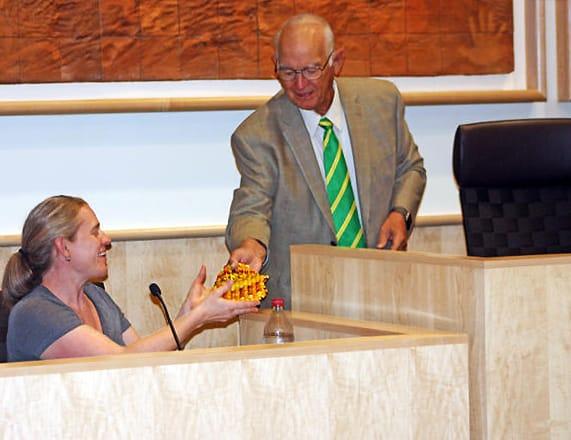 While Los Alamos County Council agreed to make some additions to the County’s public art collection during its Oct. 2 meeting, there is one piece that will not be included.

Arts in Public Places Advisory Board’s recommendation to approve commissioning Albuquerque artist Evelyn Rosenberg to create a piece of art for an underpass on NM 502, which is scheduled to be constructed in 2020, was rejected 4-3.

If the artwork had been approved, it would have been the biggest art purchase the County ever made. The budget for Rosenberg’s artwork and its installation was $195,000.

Councilors Antonio Maggiore, Pete Sheehey and Rick Reiss voted in favor of the purchase while Council Chair David Izraelevtiz, Council Vice Chair Christine Chandler, Councilors Morris Pongratz and Susan O’Leary were opposed.
Rosenberg is a nationally recognized artist. She utilizes a process called detonography, which uses controlled explosions to create intricate metal sculptures “that are beautiful from a distance but have incredible detail when viewed up close,” as stated in agenda documents.

Arts in Public Places Board Vice Chair Catherine Ozment said public support for the project was very strong. The public’s biggest concern was the piece being vandalized. She recognized the cost also was a big factor but said the board worked with the artist to reduce costs.

However, he asked if the underpass would have any sort of security cameras or if it was even possible to install cameras. County Engineer Eric Martinez said cameras were discussed but nothing was definite. There would need to be more discussion with the police department, he said. Still he felt confident security cameras wouldn’t be a problem for the installation and design of the artwork.

“I think we can accommodate that,” Martinez said.

Sheehey asked if the funds for the underpass were a sure thing. Martinez said the funds were acquired through the federal government and the New Mexico Department of Transportation. The County also matched funds. The funds will be distributed during two fiscal years. While there is always a chance of losing funds, he said he had never heard of that happening.

Chandler asked what would happen if the County loses funds for the underpass while the artist is working on the piece. She added the County needs to be fair to the artist.

Chandler said the art project needed to be thought through carefully.

“Construction projects change and have to be adjusted,” she said.

Martinez said the design for the underpass is completed and it is out for bid. He said things can change for field conditions but he doesn’t see anything changing significantly.

Pongratz said his real concern was cost. Plus, he said he wasn’t thrilled about installing a piece of art “way out there.”
“I’m concerned about this,” he said.

Pongratz wasn’t the only one. O’Leary said she thought Rosenberg’s proposed piece was “gorgeous.” Her concern was location. She said the underpass by Los Alamos County Golf Course gets more use and she just couldn’t justify spending so much on artwork for a location that is only frequented by a limited number of people. She added she would love to see Rosenberg display her artwork at another location.

“This is something where the location just doesn’t work,” O’Leary said.

Chandler agreed saying, “I think this is fabulous and really interesting and creative and exciting but (it’s) not in the right place.”

Maggiore voiced his frustration about the lack of support for the project. He pointed out tourism has been such a big focus for the Council but it wasn’t putting any money into things to make Los Alamos a place to visit. Plus, there is currently no public art where Rosenberg’s piece was being proposed, he said.

The project is expensive “but also (we) have a really spectacular project by a top-class artist,” he said.

Reiss agreed saying, “I really think this a bold opportunity.”

He added that beauty is in the eye of beholder. Still, he felt Rosenberg’s project was great and the County should find some way to commission it.

Although Council rejected Rosenberg’s work, they did approve several other proposals. First, they approved to accept a donation by local artist Fran Stovall. The piece is a painting called “Fuller Lodge”. The painting will hang at the Los Alamos County Airport. The motion for the donation was passed 6-1. O’Leary opposed it, explaining she felt the painting would be better hung somewhere else such as the White Rock Visitor Center.

Additionally, Council approved moving “Spirit Dance” out of Ashley Pond Park and into Guaje Pines Cemetery. The sculpture will be located near the newly installed columbarium. Finally, Council approved to purchase eight glass woven kites that will be hung on the White Rock Branch Library’s fireplace wall. The budget for the piece is $45,000. The pieces are by artists Markow and Norris. Arts in Public Places Board Chair Jeremy Smith said he was excited about these pieces.

“This is really quality art,” he said. “(The artists) gave us a discount on the price. I think we are really getting a good deal on this.”