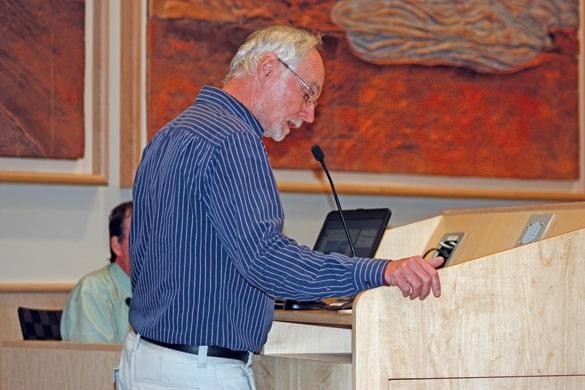 Department of Public Utilities Deputy Manager Jack Richardson discusses the sewage rate increase Tuesday night during the County Council meeting. Photo by Kirsten Laskey/ladailypost.com
By KIRSTEN LASKEY
Los Alamos Daily Post
kirsten@ladailypost.com
Change is coming again to utility bills for residents. Los Alamos County Council approved an 8 percent increase to sewage rates during its regular meeting Tuesday night in Council Chambers.
The rate increase was approved 6-1 with Councilor Susan O’Leary opposing. According to agenda documents, the rate increase will go into effect Oct. 2. Customers in all classes will see a monthly service fee increase from $10.27 to $11.09.
The monthly rates for individually metered residential customers will increase about $3 or from $37.18 to $40.15. Multi-family or non-individually metered customers will see a monthly rate increase of approximately $2.50 or from $30.97 to $33.45.
For commercial customers, which are charged a variable rate based on the winter average of potable water consumed, the rate will increase $1.40 per kgallon, from $17.50/kgallon to $18.90/kgallon.
Department of Public Utility (DPU) Deputy Manager Bob Westervelt said the purpose behind this rate increase is to generate enough revenue to qualify for a loan to replace the White Rock wastewater treatment facility, support operational needs, and provide for a meaningful capital replacement program.
DPU Deputy Manager Jack Richardson said the estimated cost of the new facility is $14 to $17 million.
Additionally, according to agenda documents, the rate increase will help DPU re-establish capital projects related to the wastewater collection system that were on hold, and also build up adequate financial cash reserves to comply with DPU’s adopted financial policy.
DPU has taken some other actions to assist with financing the wastewater treatment facility. During the Jan. 30 regular council meeting, council approved DPU’s recommendation to transfer $2.5 million from the gas fund to the wastewater treatment fund to pay down the loan of the Los Alamos wastewater treatment plant.
During an Aug. 28 council meeting, when council approved the refinancing of the loan, DPU Manager Tim Glasco said by transferring the money, DPU would be able to pay lower interest on the loan as well as extend the loan from 20 to 25 years. This, he said, effectively drops the annual payments by close to $500,000 a year.
Westervelt added that during the August meeting it was “decided the 25-year term was the best balance between future needs of the plant and current financing.”
It was emphasized during the Council meeting that pursuing a replacement facility in White Rock is essential. Richardson pointed out the White Rock wastewater facility is more than 50 years old. According to agenda documents, the facility is barely meeting environmental compliance regulations, which have already been relaxed due to its age.
It was pointed out the project cost could change. Richardson said tariffs on steel and aluminum are impacting the project.
Council Vice Chair Christine Chandler asked what DPU would do if the project cost turns out to be more than $17 million. Glasco said the department experienced that very scenario with the Los Alamos treatment plant. He said in response, DPU canceled the bid, threw out the old design and recreated a new design plan. Glasco added the department also worked to secure more funding.
“We ended up delaying the entire process about two years but we did build the plant,” he said.
Westervelt added that the lessons learned from the Los Alamos treatment plant are being applied to the process of securing a new White Rock plant but ultimately, “we don’t know till we get the bids.”
Councilor Rick Reiss supported the increase saying, “The principle here is how are we going to replace a sewage treatment plant. We have a monster out there-we have to slay it.”
Councilor Pete Sheehey also agreed to approve the rate increase.
“The fact we can lock in very favorable financial terms is very fortunate,” he said. “This is a big step in properly financing our waste stream program and I think it is as fair as we can make it. We need to move now (because) it’s not going to get cheaper.”
O’Leary said she could not support the increase. She said she disagreed with the philosophy that it is acceptable to increase the rate and then not implement increases in out-years. O’Leary said she felt it was unfair for customers to experience no increase for a period of time and then into the future DPU makes other customers pay rate increases. She further pointed out that not all residents share the same level of income and the rate increase could be a burden to those who fall below the median income in the County.
O’Leary said she mentioned numerous times that it is better to go with a modest standard annual increase so that citizens can expect it and plan for it.
“There’s better ways do it,” she said.
Chandler said she shares O’Leary’s and customers’ frustrations on this matter. She said in the past DPU and previous members of the Board of Public Utilities made poor decisions. As a result, “current residents are cleaning up the mess created by past boards and past decisions.”
However, Chandler said she would support the rate increase to ensure a better system.
LOS ALAMOS