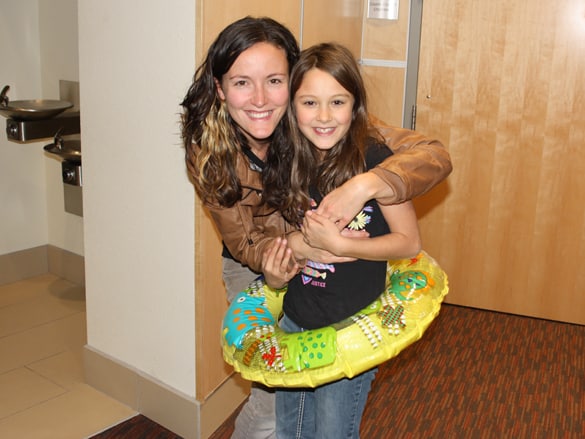 After hearing the Los Alamos County Council’s decision on the recreation Capital Improvement Project (CIP) for the pool, long-time advocate for the project Shelby Redondo said, “I want to sob with relief. It’s the right thing for kids.”

Council approved all four proposed recreation CIPs during its regular meeting Tuesday night in Council Chambers. The capital projects were passed in two separate motions. Council unanimously approved $720,000 for the splash pad, $4.5 million for improvements to the golf course, $1.2 million for improvements to the ice rink including $15,000 for a study on a shade structure. The final CIP, $6.5 million for a kiddie pool, was passed 5-2. Councilor Chris Chandler and Council Chair David Izraelevitz voted against the proposal.

Staff were instructed to return with a budget adjustment and construction on the pool will not begin until the contract with Los Alamos National Laboratory is finalized.

Councilor James Chrobocinski said he was pleased with the final decision.

“There’s nothing more important to me than the kids of Los Alamos and the kids just got a victory,” he told the Los Alamos Daily Post.

In a written statement to the Los Alamos Daily Post, Vice Chair Susan O’Leary said, “We’ve taken an important step forward to make Los Alamos County an even better place to live. Everyone benefits by this vote and especially our children, who are so deserving. It’s taken years and in some cases, decades, to secure this funding. It never would’ve happened without the unwavering commitment of so many volunteers. Special thanks to our citizen Parks and Recreation Board and subcommittees whose judgement prevailed; and to the County Council for hearing and supporting our citizens.”

According to agenda documents, the CIP for the golf course includes: a new irrigation system, aerating of tees and fairways; top dress for fairways; overseeding of fairways, tees and greens; renovations or installations of bunkers, tee boxes and safety netting as well as car path improvements and other features.

The splash pad, as stated in agenda documents, will include not only water features on the splash pad but shade structures, furnishings and prefabricated changing stalls.

The ice rink CIP includes a locker room addition, replacing flooring with rubber flooring and reconfiguring existing bathrooms, according to agenda documents, and the shade structure study also will be conducted in an effort to prolong the skating season and improve the quality of the ice.

The pool project will include a zero-depth entrance, water slide, lazy river, water features, deck and locker spaces, according to the documents and the pool size will increase along with its capacity.

While the splash pad, improvements to the golf course and ice rink received full support; the scale and budget for the pool CIP was hotly debated.

The budget for this CIP has been modified even before it came to Council Tuesday night. Originally, Council set the budget for the pool project at $5 million, which would create a kiddie pool. The Parks and Recreation Board recommended increasing the budget up to $7 million to form a multi-generational pool. In the end, the budget was raised an additional $1.5 million.

Izraelevitz wondered where the extra $1.5 million would come from. He further argued he hadn’t heard what the benefit was to increase the budget. In the approved motion, it was stated the CIP for Deacon Street would be delayed one year, to 2020. The budget for this project in Fiscal Year 2019 is $2 million.

Izraelevitz pointed out the additional $1.5 million could have been used for a number of worthy recreation CIPs including improving the softball fields, the tennis courts or the County’s gymnasium spaces. He added now businesses such as CB FOX would need to be told that the Deacon Street CIP, which would benefit them, has been pushed back.

Chandler also questioned the budget for the pool CIP. She noted during time leading up to the recreation bond vote in May, the lack of adequate gym space was heavily emphasized. She pointed out if the council would choose to partner with Los Alamos Public Schools to offer gymnasium facilities, it would further one of the Council’s goals to collaborate with the schools. She said that with the $6.5 million project, the County would not have sufficient funds to support the gym project and the tennis court project for many years.

If the Council went with the $5 million pool project option, Chandler said she felt the Larry R. Walkup Aquatic Center would be a multi-generational facility. The existing therapy pool, main pool and newly constructed kiddie pool would offer something for all ages, she said.

Those who voted for the project also questioned the project’s finances. Councilor Rick Reiss said it seemed the Council was spending money it was not certain it was going to have. He pointed out that the land sale for A-13 has a 15-month due diligence period and there are a lot of unknowns that could happen. Furthermore, the laboratory contract is still up in the air. Reiss said council needs to be conscious not only of the capacity for swimmers in the new pool but also the County’s capacity to pay for it.

Councilor Antonio Maggiore expressed frustration that the staff’s presentation on the pool CIP did not include any information about operating expenses, additional staff salary and possible revenue. “(You) haven’t done enough homework for us to make a decision on this,” he said.

Maggiore said approving this project is not only approving a new pool but also a long-term operation.

“It’s not just building it; it is for the kids and we all want to build it for the kids; we all want to maintain what we have … it’s been a historical problem for this community and I don’t feel like I’m hearing (enough detail) to make an informed decision on this.”

Many members of the audience offered their thoughts on the CIPs. Brady Burke said he was “aghast” the Parks and Recreation Board would recommend spending more money on the pool project. He urged the Council to exercise fiscal responsibility.

“We don’t need to spend that kind of money,” Burke said.

Although she supported the CIPs, Helen Milenski said she felt the council needed to wait on the pool project.

“I … sincerely think we need to do this and do this right,” she said. “We all want our piece of the cheese … but the smart thing to do is to wait, wait to do it right.”

Regarding the County’s financial future with the laboratory contract yet to be awarded, Robyn Shultz pointed out that she has lived in Los Alamos for 16 years and during that time she has learned that “things are never certain.” If the amount of gross receipts tax the County receives from the laboratory goes away with the new laboratory contract, she noted the community will have far bigger problems than a new pool. Plus, as O’Leary had commented, if that does happen, the brakes on these projects can be applied, Shultz said.

“Please be brave and build a pool for our children,” she said.

The youngest speaker at the meeting, Avery Olsen, also spoke in favor of the new pool. She described her recent experience at the Genoveva Chavez Community Center in Santa Fe. The slide at the center, Olsen said, “felt super awesome … wanted to do it all over again.” She added, “The lazy river … is really, really fun.”