County Appoints Representation to LACDC Board 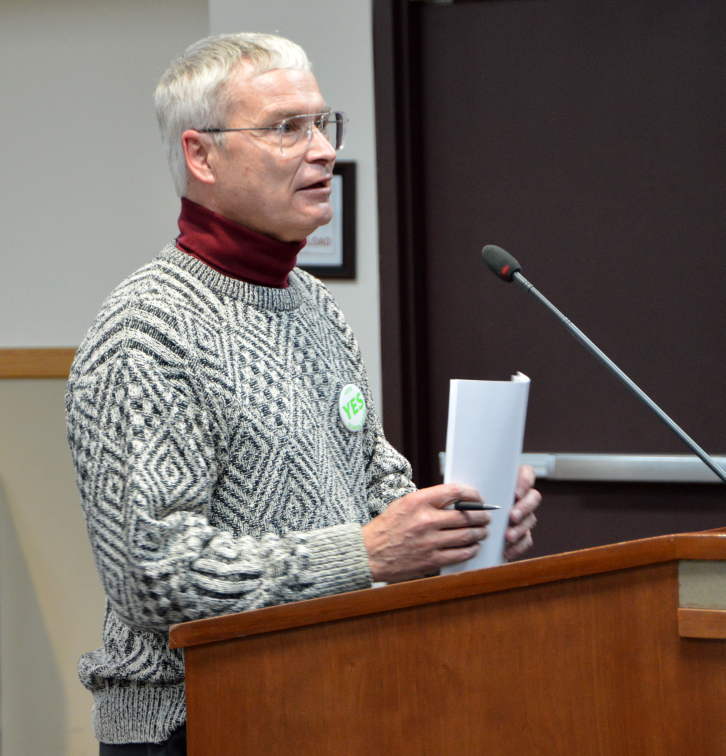 During tonight’s County Council session, board member Bill Wadt of the Los Alamos Commerce and Development Corporation (LACDC) addresses Council on behalf of LACDC Chair David Horpedahl, encouraging Council to appoint two County members to its Board of Directors. The Council voted 6-1 to appoint County Councilor David Izraelevitz and County Administrator Harry Burgess to serve on the board. Photo by Carol A. Clark/ladailypost.com
Staff Report
In the spirit of building upon the relationship between Los Alamos County and the Los Alamos Commerce and Development Corporation, (LACDC), the Council voted 6-1 to appoint County Councilor David Izraelevitz and County Administrator Harry Burgess to serve on the LACDC Board of Directors.
Councilor Vincent Chiravalle voted against the motion citing concern for potential conflict of interest issues. Council made it clear that the positions would be in the capacity of relaying information back to the Council and County.
This decision to appoint new members to the LACDC board stems from Council Chair Sharon Stover and County Administrator Harry Burgess attending a board meeting of the LACDC Oct. 1, during which the issue of County representation on the LACDC board was discussed.
The underlying purpose of that meeting was a desire to improve upon the relationship between LACDC and the County, with a specific focus on how the two entities can coordinate their efforts regarding economic development.
As part of that discussion, the fact that the County-appointed representatives to the board have not been reviewed in recent years became apparent, as one of the County’s appointees has moved out of state yet is still named as a member of the board.
Based upon a 1998 Project Participation Agreement related to the development of the Los Alamos Research Park, the County was granted the right to appoint two members to the LACDC Board of Directors.
The County has made such appointments in the past, but over time this right has not been exercised, resulting in the appointees serving for an extended period of time. The organizations’ bylaws establish term limits (3 years) for its elected members, however the County appointees’ terms were not defined as it was left to the County to make such appointments.
Based upon the research conducted on the history of these appointments, both current appointees have served for an excess of 10 years in their positions, and as stated earlier, one of the two County appointees no longer resides in Los Alamos.
Izraelevitz and Burgess will replace John Davies and Bill Godwin currently serving in the same capacity as representatives of Los Alamos County. The Council thanked Davies and Godwin for their service in these positions and their efforts to improve the community of Los Alamos. No fiscal impact is anticipated due to the appointment of the new members to the LACDC Board.
Menu
LOS ALAMOS