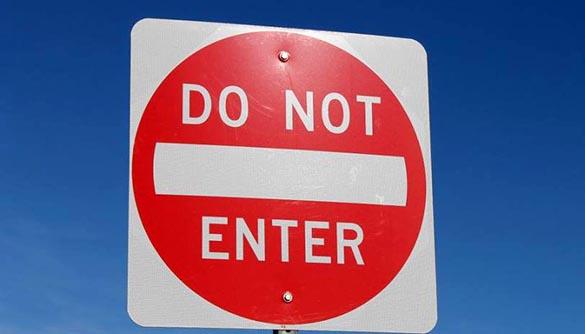 By All Time Lists:

For safety concerns, the U.S. government has issued travel advisories on several countries. Here are 10 of them:

According to an article published by MSN, the U.S. State Department has a standing “do not travel” advisory on Libya. The country has been unstable since its dictator was toppled in 2011. The government is unable to control crime, for the most part, and extremist groups are known to target foreign travelers, particularly those from the U.S.

But, for those of you old enough to remember, you know that Libya’s issues go back further than that. The country was a big sponsor, so to speak, of terrorist operations in the 1980s. There’s even a reference to it in the film “Back to the Future.”

In January, the U.S. State Department issued a Level 4 “do not travel” advisory (raised from travel advisory Level 3 – reconsider travel) for Venezuela and ordered all non-emergency U.S. government employees and family members to evacuate immediately. This was due to the country’s ongoing political turmoil.

OTHER THINGS YOU SHOULD KNOW:

This one should come as no surprise to anyone. I mean, after all you hear in the news about it, who’d want to actually travel to North Korea anyway? Dennis Rodman, I suppose. Nonetheless, the U.S. government doesn’t want its citizens traveling there — and for good reason. It actually has more to do with the North Korean government than it does with the North Korean people. According to USA TODAY, the North Korean government remains the biggest threat to American citizens. That’s because they are at risk for arrest, long-term sentences, and hard labor for infractions that aren’t even considered crimes in the U.S. These infractions, and I use the term loosely, include taking unauthorized photographs, shopping at stores not designated for foreigners, and disrespecting the country’s current and former leaders — hardly anything that someone should have to do hard time for.

It’s not so much that the U.S. government has issues with Turkey. It’s the fact that Syria, one of the countries that’s home to ISIS, is on Turkey’s southern border. Hence, the State Department has issued a Level 3 “reconsider travel” advisory. Americans have been advised not to travel to areas along this border (and certain southeastern provinces as well) because of concerns about terrorism. In fact, terrorist groups have been known to kidnap and assassinate Western tourists and expatriates.

This is not a country you want to travel to unless you don’t mind getting kidnapped, arrested, and detained. That’s what an article published by MSN says will likely happen to you if you visit. In fact, Iranian authorities have been known to detain students, academics, journalists and business travelers on unjust charges, one of which includes espionage. Those most at risk are people who hold dual U.S.-Iranian citizenship.

Terrorism and armed conflict are the reasons why the U.S. government doesn’t want you to travel to Iraq. In fact, American citizens face a high risk of violence and kidnapping by one of the many terrorist and insurgent groups that are active in this country. These groups target Americans as well as Western companies.

Americans also risk injury or death due to the many attacks that are carried out using improvised explosive devices. And, like in Iran, the U.S. government’s ability to provide routine and emergency services to U.S. citizens in Iraq is limited.

The State Department advises U.S. citizens to “reconsider travel” when it comes to one region of Burkina Faso in particular — the northern Sahel border with Mali and Niger. In fact, the State Department has issued travel advisories on both of those countries, Level 4: Do not travel and Level 3: Reconsider travel, respectively. According to an article published by USA TODAY, there are organized criminal groups and terrorists in this region that specifically target Westerners. Potential places of concern include restaurants, hotels, schools, and even police stations.

The State Department issued a “Level 3: Reconsider travel” warning for Haiti due to crime and civil unrest. There are currently widespread, violent demonstrations and protests in Haiti, not to mention that tourists are sometimes targeted shortly after leaving the Port-au-Prince international airport. For this reason, the U.S. Embassy requires its employees to use official transportation to and from the airport and discourages them from going to establishments after dark where there’s no secure parking, going to banks, using ATMs, driving outside of Port-au-Prince at night, and using public transportation.

FYI, Haiti is another country in which the U.S. government has limited ability to provide emergency services to U.S. citizens.

The State Department issued a “Level 3: Reconsider travel” advisory when it comes to Honduras because of the Central American country’s crimes, which include rape, extortion, and drug and human trafficking. But, that’s not all. Tourists have been known to be attacked when arriving at their hotel from the airport. What’s worse is that Honduras has the highest murder rate in the world, with 90.4 murders per 100,000 people.

Apparently, when it comes to Nigeria, the Nigerian Prince scam isn’t the only thing Americans need to worry about. According to the State Department, the threat of terrorism in Nigeria is real — real enough for the State Department to issue a “Level 3: Reconsider travel” advisory. There are many terrorist groups that operate in this country, and as a result, kidnappings and robberies are quite common in certain parts of the country. According to USA TODAY, Americans have been advised to avoid large crowds and places such as churches, markets, shopping malls, and clubs.

So, there you have it. These are just some of the countries the government doesn’t want you to visit. In the meantime, check the State Department’s website for a full list, and be safe in your travels.