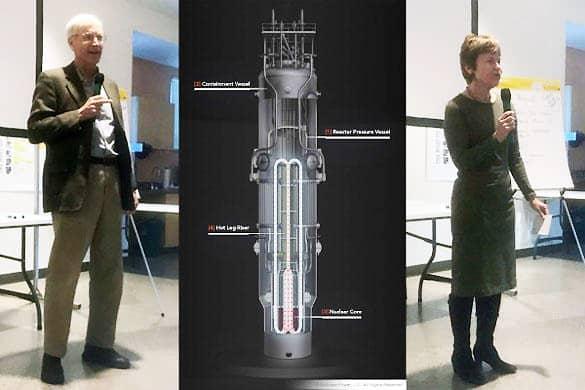 Los Alamos County Councilor Pete Sheehey, a rendering of Nuscale and Council Vice Chair Christine Chandler at a March 26 meeting on the County’s participation in the Carbon-Free Power Project. Courtesy photo
By CRISTINA OLDS
Voices of Los Alamos
The Los Alamos County Council will vote April 10 on the County’s participation in the Carbon-Free Power Project (CFPP) to construct a 600-megawatt nuclear power-generating facility that utilizes small modular reactors.
An $80,000 investment is required and will not be refundable later in the process if the County chooses to withdrawal absent a decision by the Project Management Committee not to proceed.
The County is considering options for clean energy in combination with other renewable energy generation resources to meet a carbon neutral goal by 2040.
At the March 26 meeting of Voices of Los Alamos, Los Alamos Council Vice Chair Christine Chandler and Councilor Pete Sheehey discussed and answered questions on the CFPP. Through the course of the discussion, both councilors noted more concerns and doubts about joining the project than benefits to the County.
“We are talking big numbers, and the further we’re into the project the less likely we could opt out,” Chandler said referring to the costs. “There are blanks in the addendum to the contract, and I don’t know if we’ll have real numbers by April 10.”
Sheehey said about the new nuclear reactor, “This is unconventional and never been done before. My take is if we’re to assume all the risk, there should be some kind of financial reward.”
Sheehey, who worked at the Lab as a physicist, presented the technical aspects of the project, which he said is exciting and groundbreaking in the nuclear energy field. The design of the Nuscale compact modular nuclear reactor relies on natural circulation rather than cooling pumps, which is a safer design. The designers have successfully tested a one-third scale model of the reactor, but Sheehey said it would be more accurate to test a full-scale model.
“The technology is exciting, but still experimental at this time, which gives me indigestion,” he said.
The plant would be located at Idaho National Laboratory. Participants of the Project Management Committee—other members of the group investing and using the nuclear energy—who live closer to the plant would trade energy with the County. Water and waste are other issues of concern, but weren’t discussed at this meeting.
The financing is calculated over a 40-year period, but life expectancy of the reactor is estimated at 80 years.
Chandler, who worked at the Lab as an attorney, addressed the legal and business aspects with a focus on the various players involved in the project. Utah Associated Municipal Power Systems (UAMPS), comprised mostly of Utah municipalities, is managing the project, and the Project Management Committee, comprised of other small towns like Los Alamos, are involved in decision making. Los Alamos County would have one vote as part of the committee of 30 participants. The voting is weighed toward moving the project forward in that decisions to stop the project require a two-thirds vote of PMC members, whereas decisions relating to advancing the project require a simple majority of votes.
DOE also is involved and the Lab is considering involvement, both much bigger possible financial contributors, which the councilors felt would be better equipped than the County to take on the risk.
Chandler was concerned with the “take-or-pay provision” that says the County would have to pay for its allotted megawatt hours of energy if used, if not used, or even if the electricity is unavailable.
“This is a big commitment,” she said. “We start paying during the construction phase before the plant is producing, and it will take several years to be built,” Chandler said.
The first decision point is April 10 and the County’s cost would be $80,000, according to the latest figures. A month ago, the cost was identified as nearly $.5 million.
The next decision point would be in a year and would require a more significant financial commitment, which will again increase at the subsequent phase.
“The money is financed by the participants pledging electricity rates to cover cost share,” Chandler said.
There are ways to get out of the deal, but the County could stand to lose the initial $80,000 and it gets more expensive the longer the County stays in the project.
“These are issues I’m obviously concerned about,” Chandler said.
When asked by an audience member if the decision to join the project can’t be delayed beyond the April 10 deadline, both councilors agreed they liked that idea.
“I don’t think the deal presented to this town is acceptable,” Sheehey concluded. “We believe this technology should be pursued by the federal government.”
Chandler added, “The DOE mission is to develop alternative energies. They should be taking the risk, not the small communities.”
Audience members encouraged the councilors to pursue other alternative energy deals, using wind and solar.
The community is encouraged to send comments on this issue before the April 10 council meeting to countycouncil@lacnm.us and attend the meeting to provde input.
Menu
Los Alamos
46°
Clear
6:24am6:06pm MST
Feels like: 41°F
Wind: 10mph W
Humidity: 27%
Pressure: 30.12"Hg
UV index: 0
MonTueWed
59/41°F
59/36°F
50/28°F
Weather forecast Los Alamos, New Mexico ▸