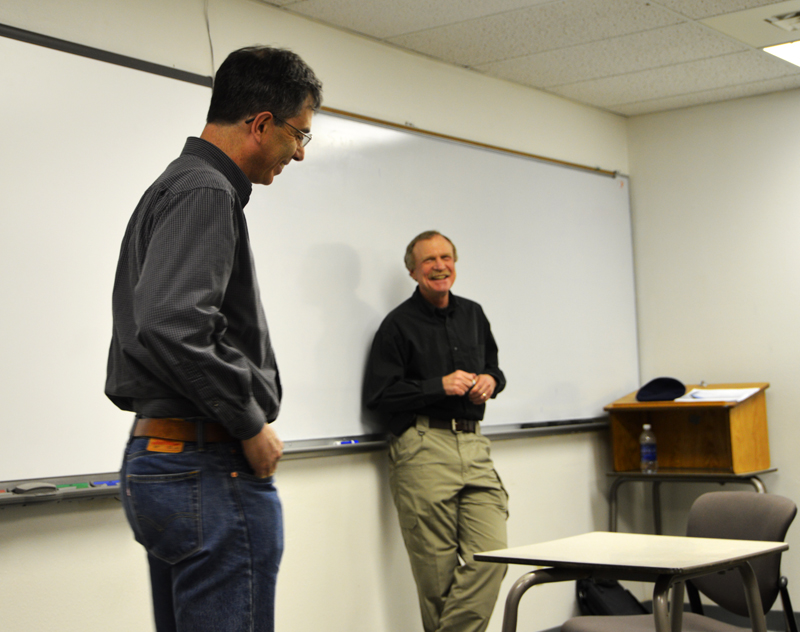 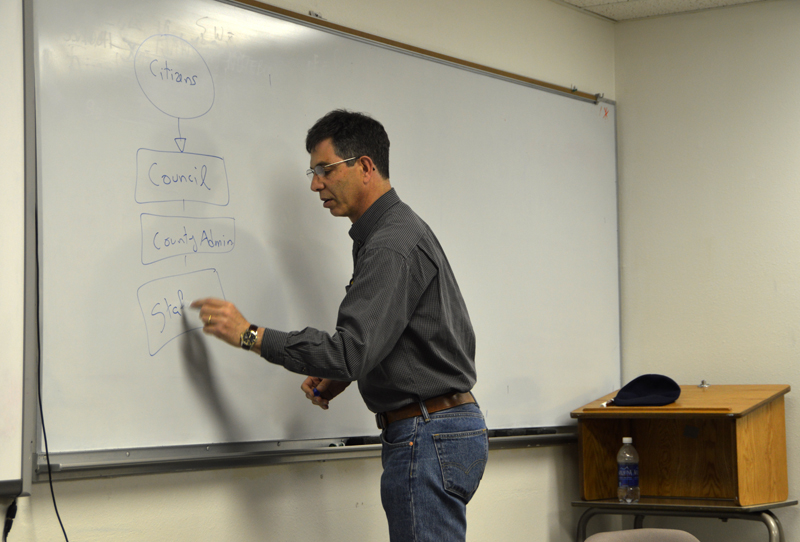 Councilor David Izraelevitz describes the hierarchy of County government to students Monday evening at UNM-LA. Photo by Carol A. Clark/ladailypost.com

He went through the steps involved in adopting a budget each year saying that is the single most important duty of the Council. He explained that the bulk of the County’s money comes from Gross Receipts Tax paid by Los Alamos National Laboratory.

“The Lab pays 80 percent ($50 million) of the GRT that the County gets,” Izraelevitzsaid, adding that LANL plays a huge role in the County’s income and is why people say ‘when the Lab sneezes – the County catches a cold.‘

Izraelevitz said the County keeps in close contact with the Laboratory throughout the year to see how its funding is going and if the Lab says its funding is going down by some percentage, the County tightens its belt by that same percentage. In 2013, County departments were trying to trim 5 percent, however, when in December it turned out that the Lab had more funds than previously anticipated, the County was able to propose a flat budget for FY2015.

“Starting in November, the Council looks into operational delivery and strategic planning and gives guidance to the County administrator on the budget,” Izraelevitz said. “In April we go department to department listening to their proposed budget. Then there’s the citizen input component and the nonprofits … the budget is what I would call a policy plan for our community.”

The County will never have a government shut down as has occured in Washington, D.C. for the nation. Should the Council ever fail to adopt a budget, the County will continue operating on the previous year’s budget until consensus is reached, he said.

The Council is the governing body of Los Alamos County and was created by the Los Alamos County Charter. Izraelevitz drew a chart for the students detailing the hierarchy. Los Alamos citizens are at the top, followed by the County administrator with staff below him and the Department of Public Utilities manager and County attorney are at his side.

“It’s important for us as Councilors to address issues such as pot holes with the County administrator and not go around him,” Izraelevitz said. He added that there have been difficulties in the past whenever a councilor has crossed that line and gone directly to staff with issues.

The Council consists of seven members elected at large for four-year, staggered terms, he said. Each year the Council elects a chair and vice chair from within its membership. Currently, Geoff Rodgers is chair and Kristin Henderson vice chair. Izraelevitz is a Democrat running for re-election as is Republican Councilor Rick Reiss. Rodgers is a Republican seeking the Dist. 43 House seat held by Democrat Stephanie Garcia Richard. He and fellow Republican Vincent Chiravalle will face off in the June 3 Primary Election.

Los Alamos County is an incorporated County established under a special provision of the state constitution. It has both County and Municipal authority and powers. The Council has adopted a home rule charter, which allows the County to depart from certain statutory requirements. Under the Charter, the Council is the governing body of the County.

Izraelevitz explained the ways in which citizens may get an item placed on the Council agenda including stopping him or other Councilors at Smith’s to chat or calling or emailing them. If that does not prove successful, a citizen has the option of gathering five signatures on a petition and the issue will be placed on the agenda, he said, adding that gathering 15 percent of the population’s signatures (about 1,000 signatures) on a petition will bring the issue to a communitywide vote. 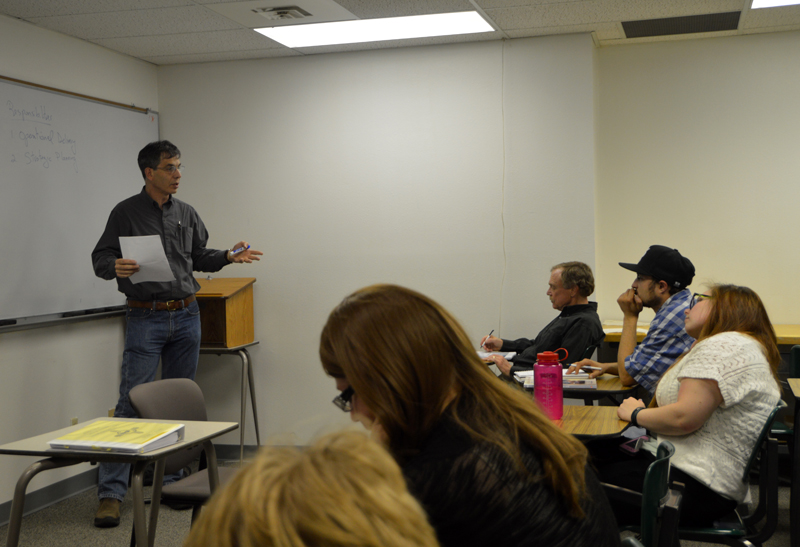 Councilor David Izraelevitz explains the importance of integrity of County Councilors. Photo by Carol A. Clark/ladailypost.com