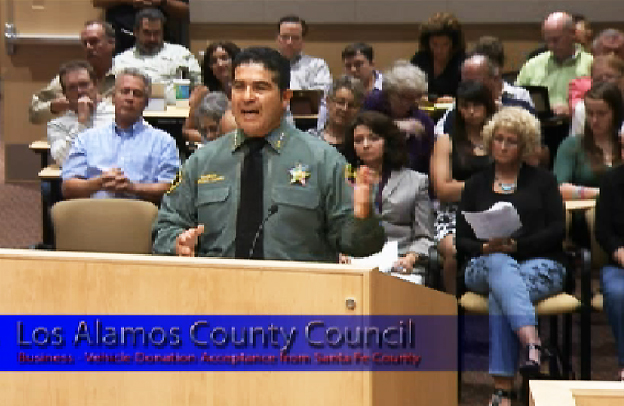 Los Alamos County Sheriff Marco Lucero answers questions from Council as to his intended use of the official vehicle under consideration for acceptance that was donated from the Santa Fe County Sheriff’s Office. Screen Shot/LAC 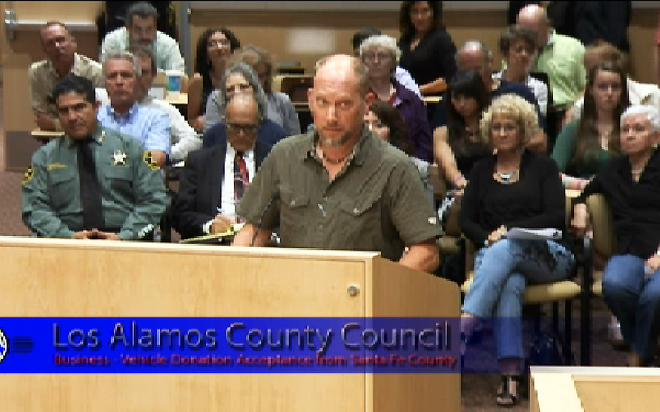 Matt Wolk expressed his anger at questions the Council was asking Sheriff Lucero and urged them to accept the donated vehicle for the sheriff. Screen Shot/LAC

At tonight’s County Council meeting, Councilors voted 3-3 against a motion to allow Los Alamos County Sheriff Marco Lucero to accept an official vehicle slated for auction. The vehicle was donated to him last week by Santa Fe County Sheriff Robert A. Garcia.

Councilors Steven Girrens, Susan O’Leary and Rick Reiss voted no, primarily citing the fact that the County Charter spells out the duties of the sheriff as administrative rather than law enforcement. They explained that the sheriff or his deputies driving around in an official vehicle with a light bar, sirens and other emergency law enforcement equipment would be in violation of the charter.

Council Chair Kristin Henderson was absent and Acting Chair David Izraelevitz proposed a friendly amendment to the motion that included the removal of the light bar, sirens and other law enforcement equipment other than the emergency radio. Izraleavitz’ friendly amendment was accepted, however, the motion to approve accepting the vehicle failed to reach a majority.

During discussion prior to the vote, Councilors James Chrobocinski and Pete Sheehey urged their fellow Councilors to approve the vehicle. Chrobocinski thanked Lucero for his service to the community and told the other Councilors, “Let’s not embarrass ourselves” (by denying Lucero the vehicle).

Sheehey commended Lucero on his service and recounted the fact that voters re-elected Lucero to a second term by a large margin. He encouraged the other Councilors to approve the vehicle for Lucero saying, “It’s a question of respect.”

Lucero stated that he put about 300 miles per month on his personal vehicle in the performance of his duties. When questioned by Council he also said if he came upon an emergency situation while driving in the official vehicle that he would respond. He said he would not stop someone for speeding but that it is the right of every citizen in the nation to make an arrest when necessary.

O’Leary explained her no vote saying, “This is not about money or respect for sheriff Lucero … he is well respected by this community … it’s about the charter … when I was elected I took an oath to uphold the charter and the charter is clear on where law enforcement authority lies … it says the police are the law enforcement agency in this county,” O’Leary said.

County Attorney Rebecca Ehler said the issue is now closed but a Councilor could ask to have it placed on a future agenda. 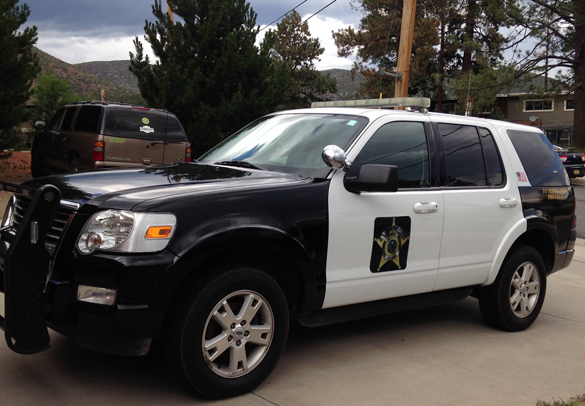