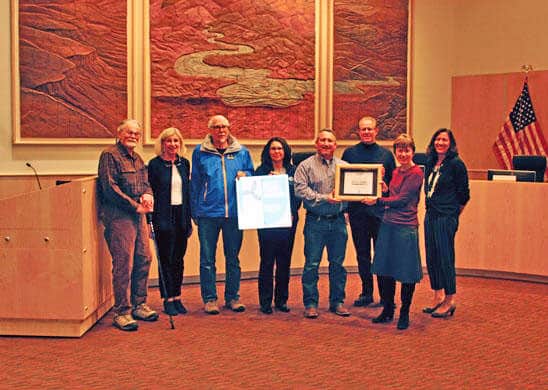 Members of the team that helped Los Alamos County earn the Bronze Level Bicycle Friendly Community award from the League of American Bicyclists show off their plaque and certificate during the regular County Council meeting Tuesday night. Councilor Chris Chandler, second from the right, recognized the team for its efforts. Photo by Kirsten Laskey/ladailypost.com

The Los Alamos County Council recognized the team comprised of residents and County staff that helped earn the Bronze Level Bicycle Friendly Community award during its regular meeting Tuesday night in Council Chambers. The League of American Bicyclists gave the award in November.

Councilor Chris Chandler made the recongition. She read, “Nov. 30, 2017, the League of American Bicyclists recognized Los Alamos County with a Bronze Level Bicycle Friendly CommunitySM (BFC) award, joining over 400 visionary communities from across the country.

These accomplishments include investment in bicycle infrastructure improvements such as completion of Phase 2 of the Canyon Rim Trail system and obtaining a sizeable federal grant to design and construct and a shared-use underpass for the Canyon Rim Trail beneath NM 502 near the Coop at Entrada Drive. As part of bicycle promotion, education and outreach, County Council proclaimed May as Bike to Work Month which was followed with events celebrating Bike to Work Day. Lastly, in June County Council adopted the Bicycle Transportation Plan which emphasizes the County’s commitment to bicycle planning as part of the transportation network.”

County Engineer Eric Martinez, who worked on the project, said, “We did a lot of work to try to get to this point.”  He added the hope is to advance up to the highest level the League of American Bicyclists offer, which is platinum. “Hopefully the sky’s the limit from here,” Martinez said.