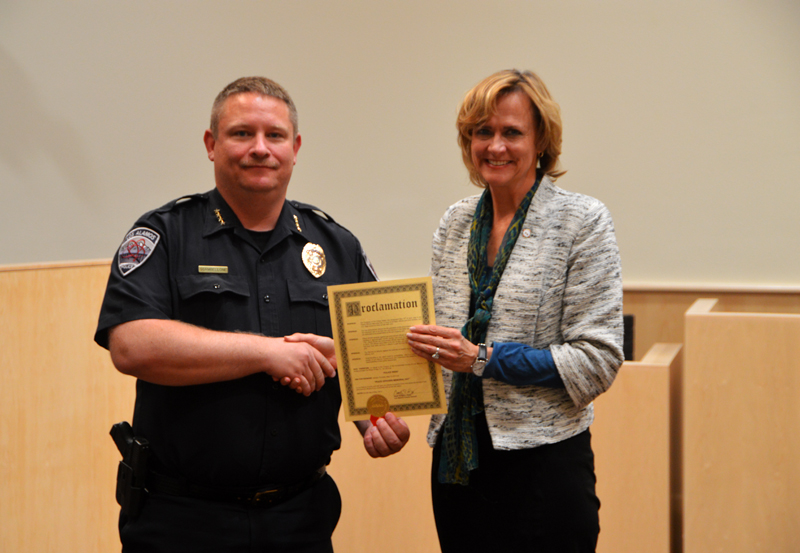 County Councilor Kristin Henderson presents Los Alamos Police Chief Dino Sgambellone with a proclamation, on behalf of the Council, declaring May 12-16, 2014 as ‘Police Week’ in Los Alamos County, and declaring Thursday, May 15, 2014 as ‘Peace Officers Memorial Day.’ Photo by Carol A. Clark/ladailypost.com 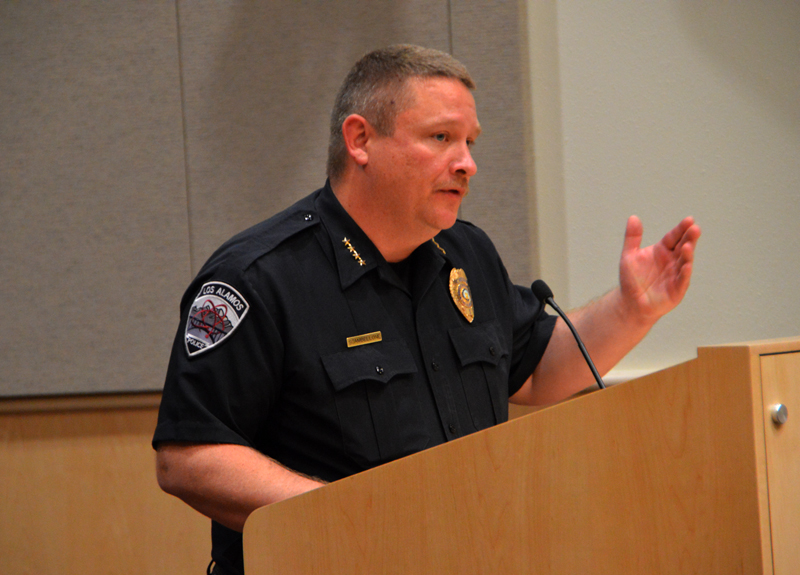 Los Alamos Police Chief Dino Sgambellone thanks the Council and commends his police officers and pays honor to those officers who have died in the line of duty. Photo by Carol A. Clark/ladailypost.com

WHEREAS: the Congress of the United States has designated May 15 of each year to be Peace Officers Memorial Day, in honor of all fallen officers and their families, and U.S. flags should be flown at half staff; and
WHEREAS: Our law enforcement officers are the guardians of life and property, defenders of the individual right to be free men and warriors in the battle against crime – they are dedicated to the preservation of life and property; and
WHEREAS: Nearly 60,000 assaults against law enforcement officers are reported each year, resulting in approximately 16,000 injuries, and since the first recorded death in 1791, nearly 20,000 law enforcement officers have been killed in the line of duty; In 2013, 105 officers were killed in the line of duty, and another 32 officers have lost their lives while serving in uniform in just the first five months of this year; and
WHEREAS: Our first line of defense against the enemies of freedom is our law enforcement officers; and
WHEREAS: Understanding is the watch word to compatibility, and it is important that the people of Los Alamos County know and understand the problems, duties and responsibilities of their police department;
NOW, THEREFORE, on behalf of the Council of the Incorporated County of Los Alamos, I do hereby proclaim the Week of May 12-16, 2014 as “POLICE WEEK”
AND FURTHERMORE, declare Thursday, May 15, 2014 as “PEACE OFFICERS MEMORIAL DAY” in Los Alamos County, and call upon our citizens to publicly honor and salute the service of law enforcement officers in our community and across the nation.
Menu
LOS ALAMOS