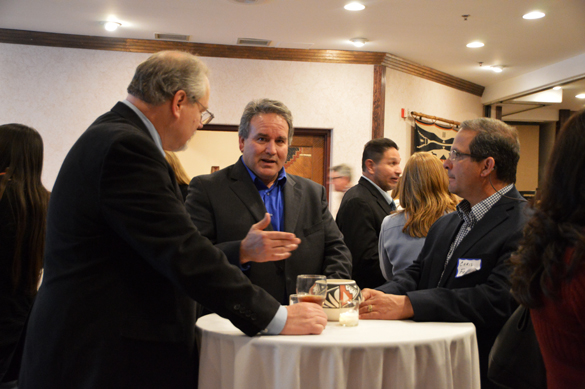 Los Alamos County Council votes 7-0 to approve the FY-2016 budget in . Photo by Carol A. Clark/ladailypost.com 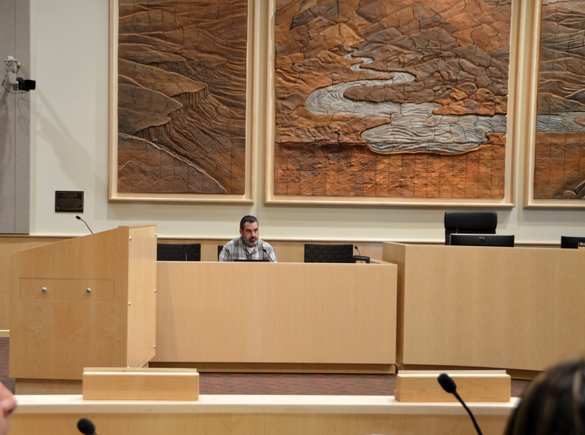 Following four days of budget hearings, the Los Alamos County Council this evening voted 5-2 to pass the FY-2016 proposed budget in the amount of $193,163,741.

The budget includes raising property taxes, which will amount to $18.75 per month or $225 per year on a $300,000 home. Councilor James Chrobocinski and Councilor Pete Sheehey voted against the measure stating they were against raising taxes in FY-2016.

County Manager Harry Burgess, in his lead in to the FY-2016 budget document presented a “budget at a glance” showing major changes in fund revenues and expenditures as follows:

General Fund: In FY2016, General Fund revenues are projected to be $0.8 million higher, or 1 percent, than in the FY2015 Adopted Budget for a total of $57.6 million. The proposed increase in property tax revenue is offset by a projected decrease in gross receipts taxes (GRT) associated with relatively less LANL spending. At a total of $46.5 million, expenditures are $0.4 million, or 1 percent, lower in FY2016 than in the FY2015

Adopted Budget: One significant component of this change is a reduction of 3.8 regular and 3.58 temporary positions. All of these were vacant positions. This net General Fund total also    includes an increase of 1 Principal Planner position in CED to help support the Council strategic goal related to updating the comprehensive plan. Offsetting increases include higher utility costs and a provision for salary adjustments. Detail of the changes and the impacts are located in the Department Summary / Performance Measure section of the budget.

Debt Service Fund: There are no significant projected changes in the Debt Service Fund. Debt service payments and the related transfer from the General Fund are planned to occur as provided for in the FY2013 refinancing of the GRT revenue debt. The majority of this debt service was related to the financing of improvements at the Pajarito Cliffs Site and Diamond Drive.

There are no placeholders for individual new CIP projects in the 2016 budget, but rather money will be proposed to be accumulated in the CIP fund balance, so that it is available for a future Council discussion about the overall CIP plan. We expect to have detailed CIP discussions after the budget hearings. The projected available ending fund balance in the CIP fund for future programming is $15.3 million in FY 2016.

Revenues are $6.7 million lower, or 8 percent. There is a $17.5 million decrease in debt proceeds offset by a $10.4 million increase in wholesale sales, which is primarily projected sales to DOE. Previously approved electric and wastewater rate increases are also included in the revenue projections.

Other Enterprise Funds: FY2016 revenues totaling $33.5 million in these business-type activities funds are projected to be $2.0 million, or 6 percent, higher than FY2015. Total expenditures of $33.8 million are $1.7 million, or 5 percent, more than FY2015. In the Environmental Services Fund, there is a decrease of 4 percent in expenditures which is primarily a decrease in planned capital outlay.

Revenues are projected to increase 3 percent, which includes a 10 percent rate increase offset by decreases projected in all other revenue sources. In the Transit Fund, there is a reduction of 1.25 regular positions. Planned grant funded bus purchases result in increases in both total expenses (11 percent) and total revenues (24 percent).

A $0.6 million, or 3 percent, increase in expenditures in the Fire Fund is due to the planned amounts within the DOE Cooperative Agreement and are primarily related to staff costs. Revenue is projected to be $0.5 million higher, or 2 percent, partially driven by higher projected ambulance revenue collections.

There is a $0.8 million, or 77 percent increase in Airport Fund expenditures related the capital plan and to anticipated new air service. Revenue increases by $0.7 million, or 188 percent due to higher level of grant funded capital projects.

Internal Service Funds: These funds account for goods and services provided by one County department to another. The Equipment Fund has a decrease of 2 percent in expenditures and a 6 percent decrease in revenues. This is intended to slightly decrease fund balance and alleviate some budget expenditure pressure for all other funds.

The Risk Management Fund: has a net increase of $0.4 million, or 5 percent. This increase is for projected increases in the costs of the medical insurance program.

Conclusion: Through great effort and employee involvement from each and every department, the County is able to present a balanced budget with minimal service impacts during a time when our revenue is greatly reduced from previous years.