An architectural rendering by Peter Rehn of a stainless steel, powder coated representation of an origami crane with a 10-foot-wingspan sculpture by Kevin Box; mounted on a stone pedestal to be installed near the SE corner of the library pointing the way to the entrance of the White Rock Branch Library. Courtesy/LAC 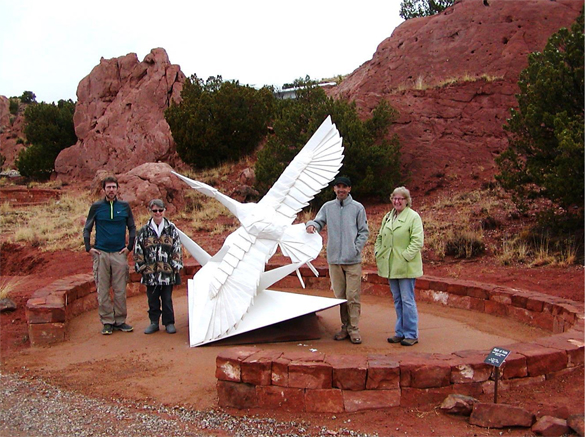 From left, Peter Rehn (library architect), County’s Charlie Kalogeros-Chattan, artist Kevin Box and Katy Korkos of the library with the Flight of Folds Monument outside the Box Studio in Cerrillos. This is the only example of the proposed 10-foot crane in existence, this Artist’s Proof is mounted with a second, simpler crane. Courtesy/LAC

Los Alamos County Council unanamously approved the expenditure of Art in Public Places Funds not to exceed $125,200 for a crane sculpture and companion piece created for the White Rock Branch Library.

Council gave the Art in Public Places Board the go ahead during today’s meeting in Council Chambers to purchase the two sculptures created by Kevin Box: a cast stainless steel sculpture based on an origami crane, and a cast aluminum companion piece that depicts what the original paper crane looks like when unfolded. Box created both of the metal sculptures using a process he developed to produce castings from paper. Dr.Robert J. Lang folded the original paper origami crane that Box used to produce the metal castings.

Chair Steve Foltyn of the Arts in Public Places Board and County Senior Management Analyst Libby Carlsten presented background information on the artwork during today’s meeting.

In 2014, artist Kevin Box submitted a proposal in response to an “APPB Call for Art” for a sculpture to be installed in the Municipal Building west plaza. Although APPB thought the proposed artwork to be beautiful and creative, the board did not feel that it was the best choice for the plaza location, and the proposal was not selected.
During this same time period, APPB was also in discussions with White Rock Branch Library stakeholders regarding artwork for the new library. These stakeholders include the Library Board, library staff, and the White Rock Master Plan Implementation Committee. During the course of many stakeholder meetings from July 2014 to January 2015, it became evident that a difference of opinion existed between those who preferred a traditional sculpture and those who preferred an abstract contemporary piece that would complement the style of the building.
Then at a Library Board meeting in January a board member mentioned seeing a Kevin Box exhibit at the Santa Fe Botanical Garden; subsequently APPB presented the Box proposal, already in hand, to all groups and the combination of subject matter, figurative style and contemporary look was widely accepted.
Box’s work involves a process he created to make molds from paper origami figures, which are then used to cast the figures in metal using the lost-wax process. His proposal, which APPB is recommending this evening for the Branch Library, involves an origami Sandhill crane with a 10-foot wingspan plus a companion piece, 35″ x 35,” depicting how the paper crane would appear if it were unfolded.
The crane sculpture will be mounted on a large basalt boulder, one of many unearthed during library construction, and the “Unfolded” piece would go inside the library at a location to be determined.

During two site visits, APPB has met with the building architect, Peter Rehn, and the county’s project manager, Anthony Strain, and both are enthusiastic about placing the sculptures at the library. The purchase price includes design, materials, labor, and all aspects of installation including base construction and lighting. All criteria for addition to the APP collection have been reviewed and met.

Artist Bio/Statement:
Kevin Box grew up in Oklahoma, received a BFA from the School of Visual Arts in New York City, and moved to Santa Fe in 2006. He and his wife Jennifer live in Cerrillos, which is also the location of their Outside the Box Studio. During his formal education, Box changed his major from Graphic Design to Fine Art and began to focus on sculpture and art in public places. After graduation he apprenticed for three years at foundries in Atlanta and Austin, Texas, then spent the next nine years developing and perfecting his signature process for producing metal castings from paper.
In 2004, he was elected as the youngest member of the National Sculptors Guild and was recognized by Southwest Art Magazine as one of the top 21 artists under 31 in the southwest. Box is represented in 12 galleries, three museums, more than 20 public art collections and hundreds of private collections.
“My work celebrates the delicate nature of paper in museum quality metal. I began my career as a papermaker, printmaker and graphic designer,” Box said. “The passion I have for paper, the ideas, philosophy and history it has captured for centuries, continued with me when I transitioned into sculpture…Today, I still begin every piece with a blank sheet of paper and manage it through the 35-step, 12-week process of casting with the help of fine art foundry teams…The results are unique or limited edition castings, forged by hand and completed with finishes that return it to the look of the original paper…I invite you to discover the meaning of the work, the stories and the ideas beneath its surface.”
Menu
Los Alamos
27°
Sunny
6:38am5:57pm MST
Feels like: 27°F
Wind: 1mph SW
Humidity: 65%
Pressure: 30.06"Hg
UV index: 0
SatSunMon
46/27°F
41/27°F
39/25°F
Weather forecast Los Alamos, New Mexico ▸