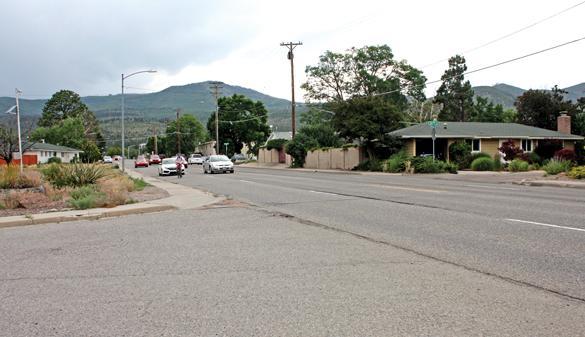 One of the main thoroughfares in Los Alamos could see a few transformations. Los Alamos County Council was updated on projects planned for Trinity Drive and N.M. 502 during its meeting Tuesday night.

Work to construct a roundabout as well as improvements on N.M. 502 from Knecht Street to Tewa Loop has already begun. Meanwhile, County Engineer Eric Martinez reported that New Mexico Department of Transportation (NMDOT) is scheduling a pavement preservation project from mile marker 0 at Diamond Drive to mile marker 4 east of Camino Entrada this summer. He explained the maintenance project excludes the current roundabout project area and consists of a rapid Cutler overlay process.

Plus, he said, LAH Investors LLC is working to construct a 150-unit apartment complex, known as The Hill Apartments, on the south end of 35th Street. The complex would be situated just east of Los Alamos Medical Center, west of Mountain View Condos and south of Alpine Laser Dental. The property was the site of the former Los Alamos Site Office.

According to agenda documents, the County is responsible for the costs of engineering and design of any off-site improvements for the apartment complex.

Council was asked to weigh in on the suggested alternative for street improvements to accommodate the additional traffic generated from the apartment complex, which consists of a concept called a road diet. The project area would apply east of Diamond Drive near the Los Alamos Medical Center entrance to west of Oppenheimer Drive, according to agenda documents. Additionally, the project would provide for left turn refuge for westbound traffic at the Los Alamos Medical Center entrance.

A road diet, Martinez explained, is basically reducing the number of vehicle lanes from four to three. The road wouldn’t be narrowed or widened but rather there would be three vehicle lanes, one lane in each direction and a center turn lane, and the addition of two bike lanes.

“The plan provides for a complete streets concept where you have dedicated bike lanes in both directions, pedestrian buffers, pedestrians crossing availability as well as transit service,” he said.

Martinez said there also would be pedestrian activated flashing lights to warn motorists about pedestrian crossings as well as a small median refuge island to facilitate safe crossing. He continued that under this plan pedestrians would be required to cross fewer lanes of traffic.

Since Trinity is a state road Martinez said, the changes will need to follow NMDOT’s requirements and that the state is interested in the council’s thoughts on the road diet option.

“They (NMDOT) are looking forward to hearing what council has to say about the project,” he said.

Additionally, Martinez said, NMDOT is set to award a $250,000 grant to the County for pedestrian and ADA improvements on Trinity. The grant request will go before the State Transportation Commission at its August meeting, he said.

After some discussion on the matter, Council Chair Sara Scott summarized council’s thoughts on the road diet option. She said council would like to see further investigation on how the road diet would affect traffic during peak hours.

Also, council wondered if staff could investigate the increase in traffic expected to be caused by the new apartment complex and increased hiring at Los Alamos National Laboratory.

Council also asked staff to investigate how the green space to the east of Diamond Drive would be impacted by the road diet option.

“I like the idea of the road diet,” Councilor Antonio Maggiore said. “I have some concerns about peak traffic hours, but my other concern is the entrance to the hospital. It seems to me this whole thing would be quite a bit safer if the hospital entrance was moved east.”

This is not the only project being discussed in the area.

Martinez mentioned while the state progresses with the roundabout project and preparing for the summer overlay work on N.M. 502, the County is getting ready to begin a pavement rehabilitation project along Diamond Drive, from the Omega Bridge to San Ildefonso Road. Provisions were made to complete the segment between Omega Bridge and Sandia and Orange streets before the start of school in August to reduce impacts to the traveling public.