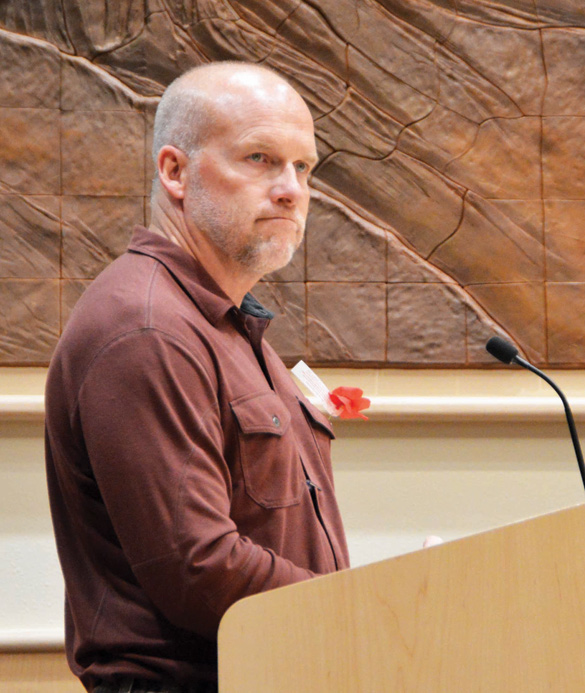 In an effort to resolve  traffic speed concerns along North Road in front of Mountain Elementary School, the Los Alamos County Council voted unanimously during its regular meeting Tuesday night to proceed with the County’s plan get drivers to slow down.

This plan includes painting striping on the road, installing permanent digital signs and monitoring traffic habits on the road. Additionally, Council directed County staff to collaborate with the school staff to further analyze the root issues with public safety on North Road, and if necessary, develop a pickup and drop off area. Council requested County staff return within 90 days with a recommendation.

Councilor James Chrobocinski asked what the striping on the road would entail.

Traffic and Streets Manager Dan Erickson explained there would be a  double yellow line in the middle of the road and a white shoulder would be painted. The shoulder would be 5 feet, 8 inches from the curb. Additionally, permanent digital speed signs that interface with the school’s flashers would be installed.

Erickson explained narrowed driving lanes can act as a traffic calming measure. When drivers see a narrow road, they slow down.

Chrobocinski offered his support for the plan. “I think it’s a great plan,” he said. Chrobocinski added he appreciated that public input was sought for developing the plan.

According to agenda documents, in Nov. 29, 2016 the Council was presented with a petition to install two speed humps on North Road near Mountain School. In response, the Council referred the matter to the Neighborhood Traffic Program and directed that speed enforcement be increased in the area until a solution was implemented.

Additionally, a public meeting was held in March where Public Works staff presented their idea to install concrete bump-outs rather than speed bumps. However, many attendees at the public meeting spoke in favor of the speed trailers and painting striping on North Road rather than installing the bump-outs.

Council Vice Chair Susan O’Leary asked if traffic studies were conducted during peak times at the elementary and if other issues were addressed.

Erickson said, “We did spend a fair amount of time visiting with school staff.”

He added they looked at different possibilities and potential parking options. However, Erickson said Mountain Elementary School could possibly be up for renovations and if that is the case it wouldn’t be a good use of County resources to make changes to parking since much of the property belongs to the school.

O’Leary said, “I think this is a great start but this is not the solution in my opinion.”

She said this is a really important public safety issue. She pointed out that the street gets crowded and it is hard to maneuver around cars not to mention see the students.

“The Council wants to make sure and has an obligation to make sure that the road is safe in front of the school,” O’Leary said.

O’Leary asked that the County and school collaborate together to further look at the issues and, if necessary, develop a pickup and drop off area and come back with a recommendation.

Councilor Chris Chandler wondered if there was land available to do that and if it would need to be located on school property.

O’Leary said it would require collaboration between the County and  Los Alamos Public Schools.