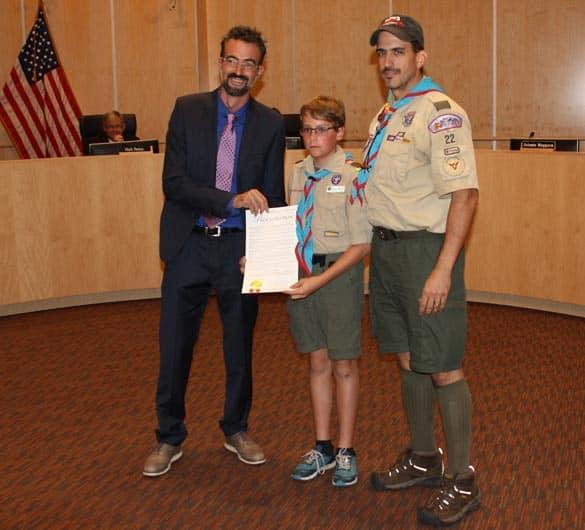 WHEREAS: After a life of military service for Great Britain, Robert Baden Powell recognized that a motivating, educational movement for youth was desperately needed – his book “Aids in Scouting” originally written for soldiers had become popular with youth leaders and teachers; and

WHEREAS: At the core of that movement, Powell wanted to target the development of one’s character, citizenship and personal fitness; and

WHEREAS: The Scouting movement was subsequently born in 1908 on a small island in southern England; and

WHEREAS: Scouting quickly spread and took root in the United States in 1910 as Boy Scouts of America, under a Charter granted by Congress; and

WHEREAS:   The great state of New Mexico was admitted into the United States in 1912, and Ashley Pond established the Los Alamos Ranch School on the beautiful Pajarito Plateau soon after admittance, in 1917; and

WHEREAS: Ashley Pond’s vision included similar ideals found in Scouting; he desired to provide young men with an active life on a working ranch, increasing their strength, and thus the Ranch School adopted the Scouting movement on January 1, 1918 – and Troop 22 was born; and

WHEREAS: The Ranch School offered a core curriculum that was a combination of college preparation along with leading a rigorous life outdoors; and

WHEREAS: Subsequently, Troop 22 became the first horse-mounted troop in the United States; and

WHEREAS: The boys, families and community organizations of Los Alamos have continuously held a Charter for Boy Scouts of America, making Troop 22 the third oldest Boy Scout troop in the United States of America, and the second oldest troop west of the Mississippi; and

WHEREAS:  Today, Troop 22 is still active in preparing young men for life by developing their character, citizenship and personal fitness; and

WHEREAS: The Los Alamos County Council wishes to congratulate Troop 22 on its accomplishments these past 100 years, and applaud their longevity and dedication to Scouting;

NOW, THEREFORE, on behalf of the Council of the Incorporated County of Los Alamos, I do hereby recognize Boy Scout Troop 22 upon their

in Los Alamos County, and ask our citizens to join in congratulating them on this historic milestone for their organization. We commend the leaders who have served thousands of volunteer hours to maintain Troop 22 as one of the longest-standing organizations in Los Alamos, and we wish Troop 22 another successful 100 years of service within our community!